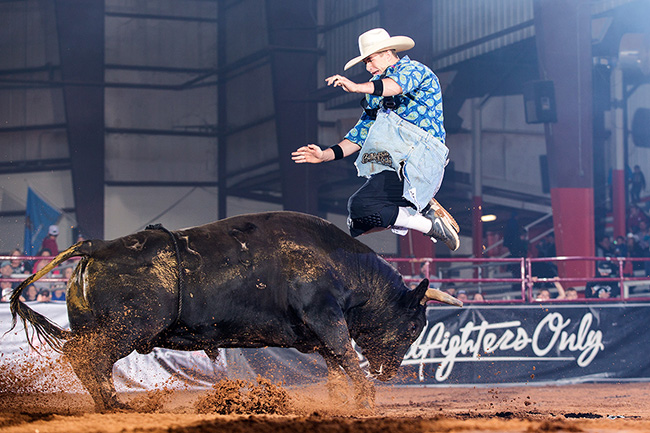 ADA, Okla. – Twelve emerging freestyle bullfighters will have a chance to make their presence known during the Qualifier Rounds for the Bullfighters Only Ada Invitational, set for 7:30 p.m. Friday at the Pontotoc County Agri-Plex.

“I’m on the hunt, and I’m not going to stop until I’ve accomplished what I want,” said Tori Ozane, 32, of Westlake, La. “That’s to be among the best in the BFO.”

Ozane is a bullfighter and has been for years, but he wants much more, and that’s what Bullfighters Only offers. He took part in the BFO Development Camp in Houston last month, where his impressive performance earned him an invite to this weekend’s battle.

Friday’s competition features four rounds, with four bullfighters in each round. The winner of each round will advance to Saturday night to compete against the BFO’s top 12 athletes. It’s the first stand-alone event of the 2018 BFO season, and bullfighters are vying for valuable points toward the Pendleton Whisky World Standings.

“I want to go in and make a statement,” Ozane said. “I’m looking forward to it, and I’m actually relaxed; more relaxed than when I went to the D-Camp.”

Some of that has to do with the intensive training Ozane received, and he wants his fight to stand as a showcase to the work he’s put in since the combine.

“The one thing I learned most was to believe in myself and in my ability,” he said. “I got with (reigning world champion) Weston Rutkowski, and he’s been talking to me every day since I left camp.”

Brooks Forsythe – who grew up in South Carolina and now lives in Pueblo, Colo. – attended the D-Camp in San Bernardino, Calif., and said it was best experience he’s had since he started fighting bulls.

“I knew those guys could help me quite a bit,” said Forsythe, 24. “It was designed to where you were working on the things you need to be a good freestyle bullfighter. They could break down what I was doing before they even saw me fight.”

Now his name is in the hat with some of the top bulls in the game – The Unicorn, Cazador and Hurricane headline the list of the bull power to be provided by 2018 BFO Stock Contractor of the Year, Rockin’ B & Magnifica Fighting Bulls.

Bullfights are judged on a 100-point scale, with half the score coming from the bull and his willingness to stay in the fight. The other half comes from the bullfighter and his ability to maneuver around and jump over the bulls.

“Being able to fight in Ada means everything to me,” Forsythe said. “My goal is to quit my real job to fight bulls full time, and this is the first big opportunity to make that step.

“I’m nervous. It’s not just the atmosphere or the bulls. This is more of a make-it-or-break-it deal to me. I took my last two days of vacation to go to Ada and make this work.”