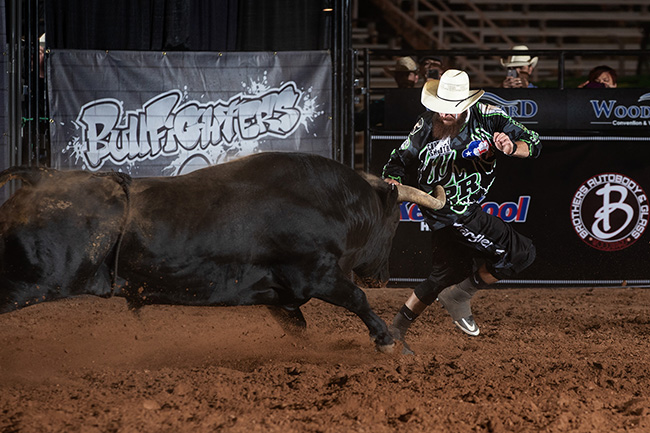 WOODWARD, Okla. – After having early-season struggles, the champ is back.

Bullfighters Only’s two-time reigning world champion Weston Rutkowski has returned to the winner’s circle, putting together two solid bullfights to win the Fiesta de Toros in Woodward. It was his first victory of the 2018 season.

“Yes, I needed it for the standings point of view, but I really needed it more for the pure fact I hadn’t drawn very well and needed it for my confidence,” said Rutkowski of Haskell, Texas. “In all honesty, I didn’t draw the bulls that are fun to fight at all, but it was what I needed.”

It was similar to two heavyweight prize fights, with the bullfighter and the bulls throwing haymaker after haymaker. It wasn’t a pretty dance like Rutkowski is known for, but a true slugfest through both fights. Sometimes, though, that’s what it takes to be the best in the game.

Rutkowski advanced through the long round with an 84.5-point score. The Hooey Championship Round featured five long-round winners, with three new faces to the game: Chase Blythe, Chance Moorman and Alex McWilliams. The only other veteran was Tanner Zarnetski, who finished in third place.

“That’s what we’ve created with the BFO,” Rutkowski said. “There are more kids coming up, and we’re creating opportunities for those kids who are coming up through the Development Camps. There’s a bunch of young talent, and they’re coming in showing their A game. It’s fun to watch.”

Now the top bullfighters in the game will advance to the next event, another stand-alone competition in Kennewick, Wash. With his earnings in northwest Oklahoma, Rutkowski moved into second place in the Pendleton Whisky World Standings. He will continue to chase the season leader, Toby Inman.

For now, though, he’s going to take a few moments to enjoy his first win in five months.

“When we pulled into town and up to the arena, I knew immediately why we were there,” Rutkowski said. “The community really did come support the BFO. It was neat to see. They’ve had their share of tragedy with the wildfires, but they still came out and supported us. That was just awesome.”