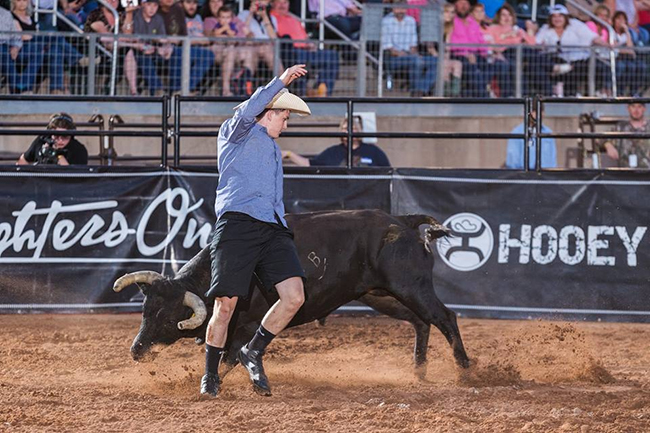 Teens, newcomers to test their skills against veterans in Kennewick

KENNEWICK, Wash. – It’s hard to call Chance Moorman a professional bullfighter for a couple of reasons: He still hasn’t graduated high school, so it’s difficult to be a professional anything yet; he just started fighting bulls two months ago.

Nevertheless, he is one of two 17-year-olds in the mix of battle for the Bullfighters Only Tri-Cities Invitational, set for 7:30 p.m. on Saturday in Kennewick.

“To be part of Bullfighters Only is one of my greatest accomplishments,” said Moorman of San Antonio. “I’ve always dreamed of being a professional athlete. I started fighting bulls, and I realized I was pretty good at it. I’ve followed bullfighting, and I’ve wanted to make it into this league. I finally got the opportunity to do it.”

His father, Cody, was a bullfighter, so Moorman knows about the game. As a youngster, he rode steers but quit when he realized it wasn’t his calling. Still, he found his athletic outlet in the traditional sports of baseball, football and basketball.

“My dad saw my ability and asked if I was interested in doing it,” he said. “I’ve been practicing on my pitbull in the backyard, then I went to the Development Camps in Houston and San Bernardino.”

He proved his ability during those March camps. A week ago, he was a last-minute replacement at the BFO’s Fiesta de Toros in Woodward, Okla., where he posted an 86-point bout, the highest marking of the weekend. He advanced to the Hooey Championship Round, which was enough to earn a spot to test his talents again in Kennewick.

“To go in there with Toby (Inman) and Weston (Rutkowski) and all those guys and put up the biggest score is amazing,” Moorman said. “It’s something I’ve always wanted to do.”

He will be one of 17 men competing in Kennewick, five of whom are rookies like Moorman. The field will also include local bullfighter Miles Barry, the 17-year-old son of longtime professional bullfighter Rowdy Barry.

“Probably the first animal I ever stepped around was a full-grown bucking bull when I was 13,” Barry said. “When I first got to the age where I understood bullfighting, it just made sense. My dad’s biggest help to me was the mental game.

“I have dreamed about being part of this since Bullfighters Only first came around. Now that I have a chance, I am very thankful, especially to compete against the best guys in the world at such a young age.”

The event will feature five preliminary rounds of competition. There will be four, 3-man rounds, with the winner of each advancing to the Hooey Championship Round. The fifth round will feature five rookies who will also battle for their opportunity to advance to the final round.

This will be a showcase of truth athleticism, with many of the world’s greatest bullfighters testing their skills against the agile, aggressive and speedy Spanish fighting bulls. Each bout will be 40 to 60 seconds of high intensity, with danger lurking at every turn.

Toby Inman is leading the Pendleton Whisky World Standings, but has been forced to bow out of the competition with a lower body injury. Reigning world champion Weston Rutkowski, is starting to close the gap after collecting his first win of the season last weekend in Woodward.

But there are a host of other bright stars, including Dusty Tuckness, a proven freestyle champion who has been recognized nine straight years as the PRCA’s Bullfighter of the Year. He won both stand-alone event that he entered last year, in Lewiston, Idaho, and Decatur, Texas.

“The stand-alone bullfights like we’ll have in Kennewick are really starting to shine,” said Tuckness, one of the BFO’s pioneers. “I think that’s the direction that we want to take this, where we have stand-alone bullfights across the states featuring the top competitors that fight for big money. We put on a great production and show behind it.

“The production just keeps getting better. We have a small but very dedicated crew, and everybody’s jumping in to make this wagon go forward. I think that’s what’s been behind the big success we’ve seen.”

Besides the phenomenal growth of the BFO, the sport of freestyle bullfighting is at an all-time high. That’s because of the groundwork laid three years ago by the bullfighters themselves. But it is only getting better, thanks in large part to the outstanding athletes that are moving up the ranks.

“Guys that nobody ever got to look at before are now getting their opportunities to shine.”

And that means stops like the Tri-Cities Invitational become more lucrative, making them more attractive to the top athletes in the game. Instead of fighting for hundreds of dollars at a time, the BFO is paying winners thousands of dollars on a given night. The champion in Kennewick will walk away with at least $10,000.

“My life has involved bullfighting since I was old enough to know what it was,” Tuckness said. “It’s a blessing. Now guys can make a successful living fighting bulls.”

That’s what makes Bullfighters Only the premier producer of freestyle bullfighting, and it’s why the best in the game are part of it.