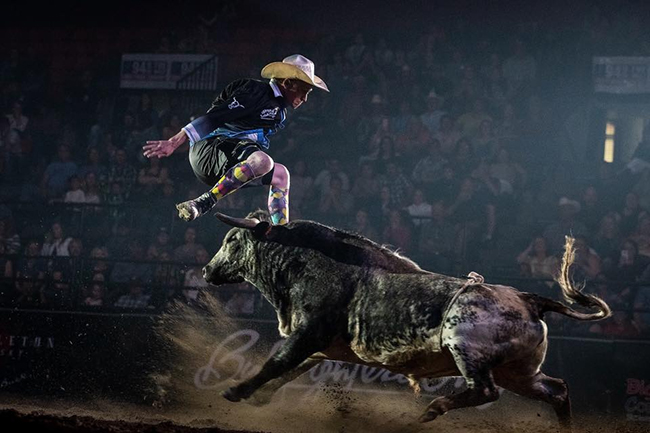 Just two months ago, he was part of the Bullfighters Only Development Camp in San Bernardino, Calif., learning the tricks of the trade. On Saturday night, he put together two winning bouts to upend a handful of veterans and win the BFO Tri-Cities Invitational in Kennewick.

“It was probably one of the greatest accomplishments of my life so far,” said Ward, 22, of Richardton, N.D. “It means I can compete with the best, and hopefully I can eventually win a world title.”

Ward was one of five rookies who were part of the Tri-Cities Invitational, and he escaped the rookie round with an 86.5-point fight to advance to the Hooey Championship Round.

“That was a tough long round,” he said. “Competing against those guys and getting the top score in the long round was amazing.”

Once in the Hooey Championship Round, Ward posted a 91-point fight. It was more than enough to claim the Kennewick title. Ward outscored Beau Schueth, Kris Furr, Weston Rutkowski and Dusty Tuckness. Schueth, who has several victories under his belt, finished second in Washington with an 89.5-point fight. Furr, the No. 3 man in the Pendleton Whisky World Standings, finished third at 89, while Rutkowski, the two-time reigning BFO world champion, placed fourth with an 88.

“I just had a good bull, probably the best one,” Ward said. “It was a really tough short round. I’d say I was pretty confident freestyling before the weekend, but after going 91 points, I feel like I can definitely do it pretty good now.”

Not bad, especially for a young man just two months into his bullfighting career. He’s been working as a protection bullfighter for four years, and two mentors suggested he give freestyle bullfighting a shot.

“After going to the Development Camp, I realized it was fun, so I decided to stick with it,” said Ward, who grew up roping and qualified for the College National Finals Rodeo in steer wrestling before transitioning over to bullfighting. “Being part of the BFO is amazing, because it’s the greatest bullfighters in the world. All I’ve wanted to do was be a professional bullfighter, and now I get to do it.”