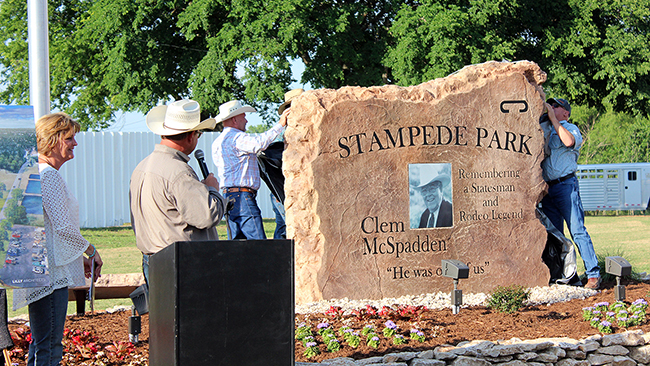 CLAREMORE, Okla. – The opening night of the Will Rogers Stampede PRCA Rodeo was the perfect time to celebrate all that Clem McSpadden was.

“We’re here to pay tribute to a man who gave us a lifetime of public service to his community, to his rodeo and to his country,” Claremore City Manager Jim Thomas said Thursday during a dedication for McSpadden and the updated Stampede Park, which is undergoing a transformation and is in the first phase of a three- to five-year renovation plan.

“Stampede Park is a dream for all. It’s a place for cowboys, cowgirls, city slickers, wannabes and families to gather. It’s a park connected by pioneer traditions going back many years. Our generations today area the benefactors of the blood, sweat and tears, which has been produced, the last four years, the PRCA’s best small rodeo of the year. We are indebted to those who came before us.”

The renovation is the brain child of the newly formed Arena Co-op, which includes private entities working alongside the city and county. But the dedication also was a tip of the hat to McSpadden, a longtime rodeo announcer who served as a U.S. Congressman for his home state of Oklahoma. He died in 2008.

A stone with McSpadden’s likeness stands as a welcome to Stampede Park, and that was reveled during the dedication.

“With this being the 10th anniversary of his passing, we thought this was a great time to honor Clem,” said David Petty, chairman of the volunteer committee that produces the annual rodeo and a member of the co-op. “Clem was a friend to all of us. Clem announced this rodeo for 50 years. It says at the bottom of this stone here, ‘He was one of us.’

“That’s one of the things Clem would say about everybody … either that or, ‘He’s got his hat shaped right.’ If he said one of those two things, you knew he liked you.”

The evening also included the inaugural Clem McSpadden Tub-Handle Classic, with three rounds of steer-roping competition. It was the perfect accompaniment to the dedication – McSpadden was the longtime voice of the National Finals Steer Roping, which also now bears his name.

“If Clem McSpadden were here right now, he would say, ‘Fellers, I really like this, but why didn’t you take the money and pay the cowboys more?’ ” said Donna McSpadden, his widow.

McSpadden was all about the cowboys. He served as general manager of the National Finals Rodeo during its run in Oklahoma City from 1965-84 and has been inducted into the ProRodeo Hall of Fame and the National Cowboy and Western Heritage Museum, to name a few.

“Clem was from Rogers County, but he belonged to a whole bunch of other folks around the state of Oklahoma and around the rodeo country,” said Bill John Baker, the principal chief of the Cherokee Nation.

But he also was the driving force behind Claremore’s rodeo for half a century.

“He was more than a rodeo announcer,” Petty said. “He was a statesman and a true Oklahoma legend.”