Reeves slides into No. 2 position 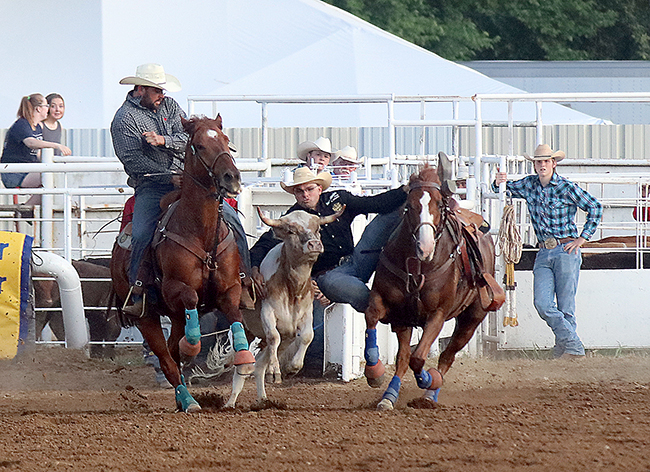 He doesn’t want to do that again. On Saturday night during the second performance of the Will Rogers Stampede PRCA Rodeo, Reeves wrestled his steer to the ground in 4.3 seconds to move into second place in the bulldogging race.

“With one day left at this rodeo, I should win something,” said Reeves of Cross Plains, Texas. “I don’t know if I’ll (finish) second, but I’ll win something.

“The horses worked outstanding. The start is really fast. I took a chance and was a little behind at the start. The steer let me catch up to him fast.”

Shane Frey of Duncan, Okla., leads steer wrestling in Claremore with a 3.7-second run, so moving into the No. 2 spot is important to Reeves. He understands that placing throughout the season gives him the best shot earning a better living.

In rodeo, money not only helps pay the bills, but dollars equal championship points. At the conclusion of the regular season, only the top 15 on the money list in each event advance to the NFR, ProRodeo’s grand finale. When the campaign comes to a stop on the 10th night in Las Vegas, the contestants with the most money won will be crowned world champions.

“Last year was the first year I hauled this horse all the time,” said Reeves, who finished 21st in the world standings in 2017. “We had some issues toward the end of the year. I had some distractions with us having our second kid coming, but you can’t be distracted and win. That’s just life.

“I’m going to try not to do that again. My hope is to have enough money by Dodge City (Kan., the first of August) to have qualified for the NFR before we got up north, then we’re just fighting for position when we get there.”

Reeves has already had a pretty successful 2018. He won the bulldogging title at The American, a stand-alone event that has been unsanctioned by any association. While the $433,000 he earned the end of February will count for a lot of things in his life, it doesn’t work toward his place in the world standings. He was 13th in the PRCA world standings heading into this weekend.

“That money didn’t really affect how I rodeo,” he said. “We did get another trailer so I could haul five horses, which makes it easier to go with guys. But the majority of that money … we bought some cows and bought a cube feeder; my kids can go to college debt-free, and I’ve got some retirement.”

For now, though, he’s just enjoying his life on the rodeo trail.