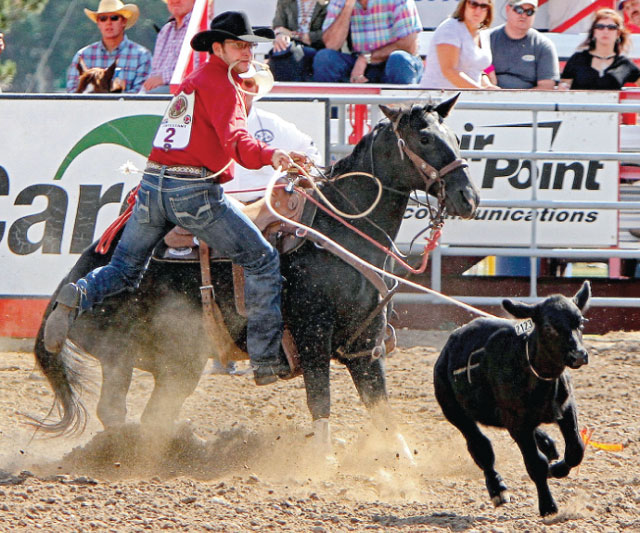 ALVA, Okla. – Maverick Harper is as confident as he’s ever been in his rodeo career, and it comes at a good time.

The Northwestern Oklahoma State University cowboy is competing at the College National Finals Rodeo for the first time, and he likes the opportunities that are before him when the action takes place Sunday, June 10-Saturday, June 16, in Casper, Wyo. But it’s not just an individual confidence; he sees great things for both the Northwestern men and women’s teams.

“I don’t see how we couldn’t be competitive,” he said, referring to the men’s team of six cowboys competing in seven events and the women’s squad of four competing in five events. “Everybody on our team is capable of winning a national championship in their event.”

Harper, a senior from Stephenville, Texas, won the team roping-heading title in the Central Plains Region, joining his heeling partner, Tanner Nall of Colcord, Okla., for the top spot in the circuit made up primarily of college teams from Oklahoma and Kansas. Harper also finished second in the region’s all-around race, so he will also compete in tie-down roping at the college finals.

He and Nall will be joined in Casper by tie-down roper Ethan Price of Leedey, Okla., who finished second in the region. Also in the mix are a trio of steer wrestlers: Talon Roseland of Marshalltown, Iowa, the regional champ; Cody Devers of Perryton, Texas, who finished second; and Bridger Anderson of Carrington, N.D., the fourth-place bulldogger.

For the women, Jenny Massing of Ponoka, Alberta, finished second in both goat tying and the all-around race, so she will also compete in barrel racing. Taylor Munsel of Arnett, Okla., finished second in breakaway roping, while Brandi Hollenbeck of Hutchinson, Kan., earned the spot on the team by finishing fifth.

Sara Bynum of Beggs, Okla., won the regional title in barrel racing and hopes to carry over that success to Casper.

“Seeing the arena does help,” said Bynum, a senior making her third trip to the college finals. “The ground is always a little bit different every year, so you don’t know what to expect. I think the mental game is easier after you’ve been there a couple times.”

She blazed through the 10-event season on her talented 8-year-old paint mare, Loretta. Bynum knows her success runs through the talented horse’s legs.

“I think the biggest thing is to go out there and have fun,” she said. “I need to take care of my horses and take care of me, then I need to let it all fall where it does. The big thing is to not to try to do too much. I’ve had to learn that if I just go and enjoy what I do, I usually do better.”

She also realizes what kind of talent will be wearing those black and red NWOSU vests.

“I think we have the potential to win it all. We have the right girls, and we have a lot of talent going this year for both teams.”

The CNFR finalists earned the right to compete in Wyoming by finishing the region race among the top 3 in the standings. Only the top two teams in the men’s and women’s divisions advance, so that’s why Northwestern is able to have two full teams comping for the top prizes in the sport.

What they’ve gained through schooling in Alva has definitely paid off.

“Stockton doesn’t know a lot about barrel racing, but he knows how to win regardless of what rodeo event you’re in,” Bynum said, noting that Graves is a seven-time steer wrestling qualifier to the Wrangler National Finals Rodeo. “He helps any way he can, and he knows the mental game of a big stage. He knows what comes into play and what will keep you competitive.”

At the intercollegiate level of any sport, the mental approach to the game is vital.

“One of Stockton’s key things is learning how to win,” Harper said. “It doesn’t always take a fast run to win. It’s knowing your stage and knowing what you have to do.”

That has worked through the rigors of the regular season. He plans to take that same approach when he competes in both events in Casper.