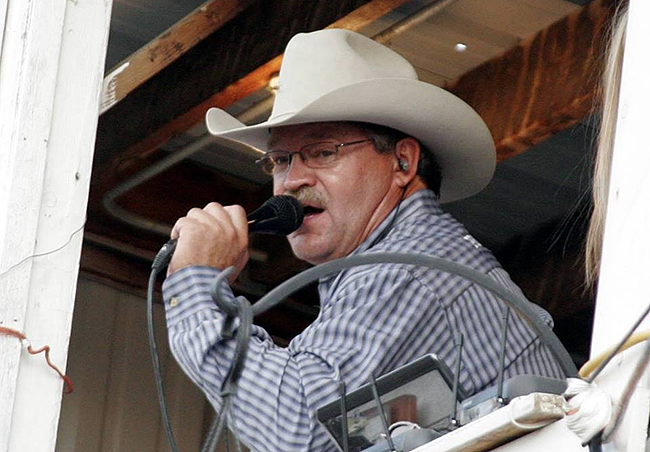 ESTES PARK, Colo. – Steve Kenyon’s voice is recognizable to those who have heard or seen him.

He’s a personality in rodeo, the radio voice that listeners turn to when they want to know what’s going on in the sport. He’s been to dozens of rodeos across this big country, so he knows the game better than most.

He returns to Rooftop Rodeo for this year’s festivities, set for 7 p.m. Thursday, July 5-Tuesday, July 10, at Granny May Arena in Estes Park inside the Estes Park Fairgrounds. He will call the action for the final five nights of award-winning rodeo, and his broadcasts can be found on his website, www.ProRodeoLive.com, and on Rural Radio, Sirius Satellite channel 147.

“I’ve learned as time goes on that you want to present events that are popular with the contestants and the fans,” said Kenyon, one of just eight individuals to have been honored with media awards from the largest rodeo organizations in the world, the Professional Rodeo Cowboys Association and the Women’s Pro Rodeo Association.

“How can you argue with the opportunity to go to a place like Estes Park, Colo. The people are great. The committee works very hard at their event, and they take their event very seriously. Besides that, the place is drop-dead gorgeous. When you combine all those things, it’s the kind of place you want to be in and the place you want to watch a good rodeo.”

Kenyon will actually be part of two national broadcasts coming out of the picturesque mountain town. He will be joined by the Wrangler Network, www.WranglerNetwork.com, which will showcase the action during Saturday night’s July 7 performance.

“We are very honored to have such prestigious national broadcasts that team with us at Rooftop Rodeo,” said Ben Vigil, president of /Estes Park Western Heritage Inc., a group of volunteers that works with the town of Estes Park to produce the annual rodeo. “They help us showcase our rodeo, which is a very big part of the town’s history.”

Kenyon is also a ProRodeo announcer who calls the action inside the arena at several rodeos around the country, but his trademark is in the radio-style play-by-play of the rodeo action. It’s something he began doing in 2006, calling the Wrangler National Finals Rodeo for a broadcasting company.

When that folded after the 2007 NFR, he established the webcast on ProRodeo Live.

“I saw a market there and an opportunity,” he said. “I talked to the PRCA, when Karl Stressman had just started as commissioner. He was a big supporter. I told him I’d like to continue to put the NFR on the Internet. At the time, it was just the National Finals.

“I decided to do more rodeos, so I started with San Antonio, the (RAM National Circuit Finals Rodeo) and Cheyenne, and it just started to grow. I started finding more and more people were listening to me.”

Five years ago, he began partnering with Rural Media Group, which owns also RFD-TV, and his broadcasts hit the national airwaves on satellite radio.

“The first rodeo we did was Salinas (Calif.), and that moved into more of what I do now, including Western Sports Roundup on 147 and on RFD-TV,” said Kenyon, who indicated that several thousand people will listen in to the Rooftop Rodeo broadcasts.

“This whole ProRodeo Live deal has opened up a bunch of doors that I never thought would have been opened. To be able to make a living and promoting the industry is amazing. To have it morphed into satellite radio and television, you’re talking about things that I could never have expected.”

As he travels this country, Kenyon is offered the opportunity to see some amazing scenery and witness some incredible rodeo. He’ll have both when he arrives in Estes Park.

“What’s most incredible to me is how hard the people of that committee work,” he said. “It’s an award-winning rodeo for a reason, and that’s because of those volunteers. You see how dedicated they are to making it a first-class project.”