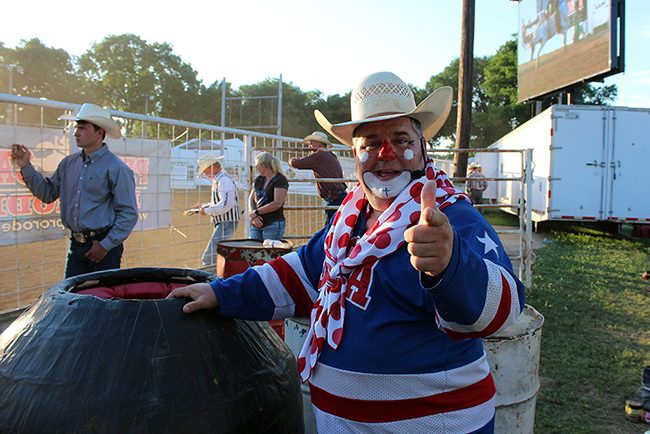 DODGE CITY, Kan. – Much of Cody Sosebee’s life has changed since the last time he was in Dodge City.

This past December, he worked the Wrangler National Finals Rodeo for the first time in his career. A couple of months ago, he became engaged to Tonya Baumgartner, and now he’s planning a wedding. At least he’s supposed to be helping with it, anyway.

But that won’t deter him from his return to the largest rodeo in western Kansas, the Dodge City Roundup Rodeo, set for 7:45 p.m. Wednesday, Aug. 1-Sunday, Aug. 5, at Roundup Arena. That also includes the Xtreme Bulls, which takes place Tuesday, July 31.

“To me, Dodge City is the epitome of cowboy and rodeo,” said Sosebee, a regular nominee for PRCA Clown of the Year and Comedy Act of the Year. “There are a lot of cowboys that come to that rodeo from the ranches and the farms. I feel like a real cowboy when you go to Dodge City.”

That’s why his selection to work the barrel at the NFR meant so much to him.

“We thoroughly enjoyed working with Cody when he was here a few years ago,” said Dr. R.C. Trotter, chairman of the volunteer group that produces the annual rodeo. “He brings a certain flair to his comedy that was a hit for the fans that come to our rodeo. He’s just a true entertainer.”

Much of that comes from his size: Sosebee is bigger than most rodeo clowns, and his raw athleticism shows through the extra cushions his body allows. His acts just accentuate it all into one funny package.

Most importantly, he wants the fans to have a good time.