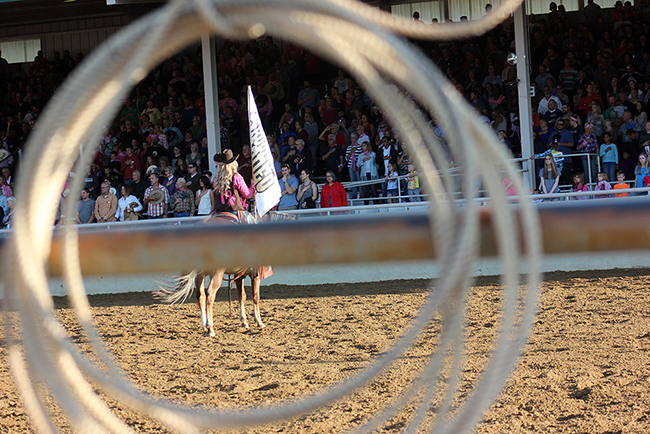 ESTES PARK, Colo. – When officials decided to make a change in the footing at the Granny May Arena inside the Estes Park Fairgrounds, they were just trying to make things better.

It did, and the barrel racers in the Women’s Professional Rodeo Association said so in 2017. Rooftop Rodeo was named the WPRA’s Medium Committee of the Year, thanks in large part to the money, time and heavy lifting by all involved to create the better footing for the arena. It will continue to serve the competitors at this year’s rodeo, set for 7 p.m. Thursday, July 5-Tuesday, July 10.

“When a committee goes above and beyond for those cowboys, they deserve the awards,” said Taci Bettis, the reigning Rooftop Rodeo champion barrel racer from Round Top, Texas. “When you put in that much effort, that’s what you get.”

Bettis hit the ProRodeo trail hard for the first time a season ago. It was her first visit to Estes Park, and she made the most of it. Not only did she win the championship, but her 17.36-second run set a new standard for the annual rodeo.

“That was part of those weeks in July when I set everything off,” said Bettis, the 2017 WPRA Rookie of the Year and a top 5 barrel racer this season. “I’d never been at that arena before, so to go in and break the record was special.”

Bettis was one of six Wrangler National Finals Rodeo qualifiers to place in barrel racing at last year’s Rooftop Rodeo. That’s a telling tale about why the WPRA ladies selected Estes Park’s rodeo as one of the best in the game. It was the sixth time in the event’s 92 years that it has been named Rodeo of the Year; it was a five-time winner in the Professional Rodeo Association.

“We put in a lot of work into the arena between the 2016 and 2017 rodeos,” said Rob Hinkle, the community services director for the town of Estes Park. “The footing was just not good for the barrel racers, so we put $125,000 into new footing.

“It’s already paid off, which was great to show off that improvement in one year. It meant a lot to the rodeo and to the town.”

Besides the award, there have been other benefits. Hinkle said the arena has gained a few new horse shows because of the better footing.

“Everybody’s taken great pride in it,” he said. “It was a lot of work. The members of the rodeo committee had to take out all the chutes and all the fencing, then put it all back in.

“By getting awards like that, it provides a lot of energy in that committee to keep going forward.”