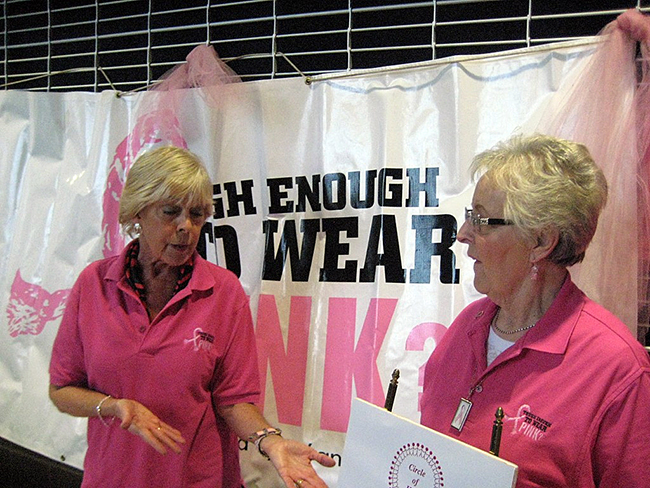 DODGE CITY, Kan. – Since its inception more than a decade ago, the Dodge City Roundup Rodeo’s Tough Enough to Wear Pink campaign has raised more than $200,000.

That’s saying something, but there’s so much more. All of that money raised has gone to Circle of Hope, a self-help non-profit group for all types of cancer patients and their caregivers. The group hopes to just keep adding to it during this year’s event.

“We typically raise about $20,000 a year for the Circle of Hope,” said Mary Trotter, who has been associated with TETWP since its founding. “The fact that it stays in southwest Kansas is why it stays as it is. What we do is pass the hats for the first four nights of the rodeo and have a pink booth at the rodeo.

“Passing the hat seems to have been the most successful for us. Of course, we really have a big push on the Saturday night of the rodeo, which is our pink night.”

Roundup Rodeo is set for 7:45 p.m. Wednesday, Aug. 1-Sunday, Aug. 5, at Roundup Arena. That means there are ample opportunities for the TETWP to raise more money for the regional charity, which has been assisting patients and caregivers through their cancer journey since 1993. The support group encourages hope, strength and positive attitude.

“Cancer is just plain scary,” said Trotter, the wife of the longtime president of Roundup, Dr. R.C. Trotter. “You never know what’s lurking in your body.”

The national Tough Enough to Wear Pink campaign was created by breast cancer survivor Bonnie Wheatley, the mother of team roper Wade Wheatley, along with Karl Stressman, who was with Wrangler at the time and went on to be commissioner of the PRCA. The plan was to allow rodeo and the Western community to rally against breast cancer.

Hundreds of rodeos across the country take part in the campaign, and not all are focused on breast cancer. That is the case with the Dodge City group. In 2016, the local TETWP campaign raised $27,000 and was among the top 15 in the country. It remains one of the biggest fundraisers in the country each year.

“We have a lot of the same sponsors that we did when we started,” Trotter said. “I think this is important because it shows that Roundup is giving back to the community and not just entertaining the fans that come to the rodeo.”