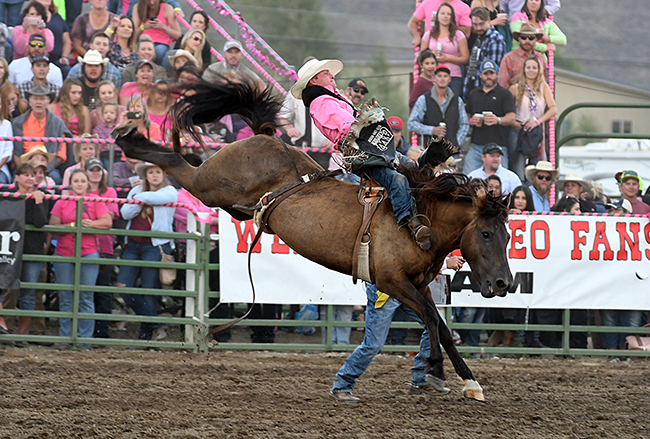 GUNNISON, Colo. – When Craig Wisehart left his Texas home, he left a few things, including his pink shirt.

That was a bit unhandy Thursday night during the Tough Enough to Wear Pink performance of Cattlemen’s Days PRCA Rodeo, which offered a $1,500 bonus to the highest scores and fastest times in each event.

“My buddy, Tyler Ferguson, told me there was a pretty good bonus for wearing a pink tonight,” said Wisehart, who lives in Stephenville, Texas, but still calls Kersey, Colo., home. “I told him, ‘I was silly and left all my pink shirts in Texas.’ He told me there was a Tough Enough to Wear Pink booth on the other side of the arena and to get one.

“I ran over there, and they fit me with one, and here we are.”

“I knew it was a colt, but we can call a bunch of people who know what it is or have been on that horse,” said Wisehart, the assistant rodeo coach at Tarleton State University. “A good buddy of mine, Jake Brown, knows horses like nobody’s business. When Jake says he’s a hopper, I take it.”

A “hopper” is considered a horse that makes a straight motion as it jumps and kicks with few moves in between.

“When I showed up here tonight, everybody told me I was going to love it,” he said. “It was reassuring.”

Because of his coaching schedule, Wisehart focuses on the rodeos he knows and likes. He’s qualified eight times for the RAM Mountain States Circuit Finals Rodeo, where he has won the average twice and won the outright circuit title once. Part of that is familiarity, but another is having a strong rodeo legacy at a lot of rodeos in the region made up of stops in Colorado and Wyoming.

“It’s just the atmosphere,” he said. “The rodeo heritage, and the guys in Colorado and Wyoming are true rodeo cowboys. I was born and raised here in Colorado, so I’ve seen all these kinds of rodeos all my life.

“I love this rodeo. The hospitality and the committee is great, and the stock is amazing. Just driving in, you see the black cows out in the pasture and know this is cowboy country.”

The pink program also paid off for barrel racer Chris Gibson of Windsor, Colo. She posted an 18.03-second run to earn the $1,500, then donated $300 back to the Cattlemen’s Days TETWP committee.

“That’s one thing I love about this rodeo, and I’ve wanted to do that,” she said. “After I came here the first time, I knew I didn’t want to miss this rodeo again because of their pink campaign.”