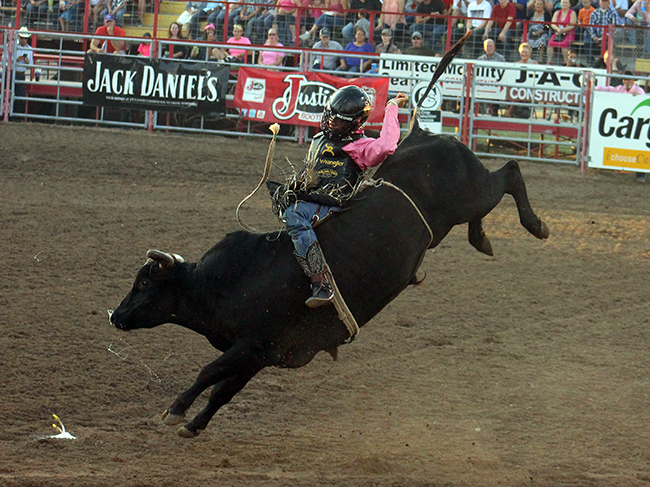 DODGE CITY, Kan. – Every August, folks all across southwest Kansas have the opportunity to see the greatest stars ProRodeo has to offer.

This is a preview of the Wrangler National Finals Rodeo, only four months early during the Dodge City Roundup Rodeo, set for 7:45 p.m. Wednesday, Aug. 1-Sunday, Aug. 5, at Roundup Arena. That also includes the Xtreme Bulls, which takes place Tuesday, July 31.

“We take pride in having the kind of rodeo that attracts the top cowboys and cowgirls in the game,” said Dr. R.C. Trotter, president of the Roundup committee, a group of volunteers that works year-round to produce the rodeo each August.

“We love that they want to come here, and we want them back every year.”

Roundup is historic with a fantastic legacy. Over the years, it has been home to the greatest cowboys to have ever played the game. In fact, the rodeo committee was inducted into the ProRodeo Hall of Fame in 2012 and continues to be recognized as one of the best events in the Professional Rodeo Cowboys Association.

“This is a great rodeo” said Hooper, a four-time NFR qualifier from Carthage, Texas. “It’s one of my favorites to come to every year, and I’ve always had good luck here.”

Roundup has been selected as the PRCA Rodeo of the Year nine times, and the contestants recognize that. Shade Etbauer became the second generation of his family to win the saddle bronc title; his father, Robert, and uncles, Dan and Billy, all won Roundup through the 1980s and ’90s.

“It’s always tough competition and the top guys in the world,” said the younger Etbauer, the 2017 PRCA Rookie of the Year from Goodwell, Okla. “To be able to compete against them is incredible.”

Contestants will compete in preliminary rounds, with the top times and scores advancing to the championship round, which takes place Sunday, Aug. 5. That night’s field will include several reigning and past world champions, all of whom had competed at some point earlier in the week.

“What we like about the format is that be best of the best in our short round Sunday night,” Trotter said. “It really is an NFR preview. Nearly all the contestants competing that night have been or will be competing in Las Vegas at some point.”

“The committee is so good to us, and we appreciate them,” said Tom Lewis, an NFR qualifier from Lehi, Utah. “It’s nice driving this far and making it pay off.”