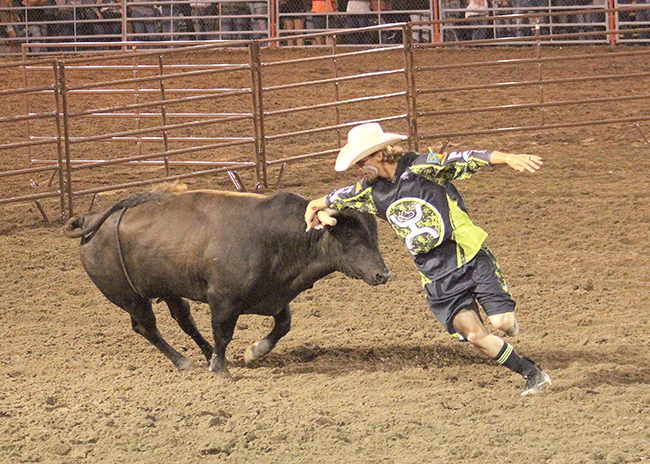 DODGE CITY, Kan. – Schell Apple knew he had to be the aggressor during Tuesday night’s Bullfighters Only Wrangler Bullfights at the Dodge City Roundup Rodeo.

He matched moves with a young bull from Rockin’ B & Magnifica for 81 points, winning the prestigious Dodge City event title and the lion’s share of the prize money. He will move up a few places to 11th in the Pendleton Whisky World Standings, with several events left on the season.

“This means a lot and it’s really cool,” said Apple of Fay, Okla. “I’ve been putting in the work, and trying real hard. I’m trying to tap into the talent that God’s given me. This victory is not for me; it’s for Him.”

Apple outscored two of the BFO’s best – both sitting well within the top 10:  No. 6 man Beau Schueth and the third-ranked and two-time defending world champion, Weston Rutkowski. Both Schueth and Rutkowski finished with 77 points.

The three bullfighters were matched with a less experienced set of bulls Tuesday, which required each athlete to formulate a different game plan through their 60-second bouts.

“Brett Hall with Rockin’ B & Magnifica is our 2017 Stock Contractor of the Year,” Apple said. “He approached me before the event and said the bulls are fresh. That means one of two things: They could be real flighty, or they could be real hot. You have to prepare yourself mentally for both those things.”

In the dangerous game of freestyle bullfighting, the men who find the most success utilize their understanding of the animals just as much as the athleticism. That’s one of the reasons Apple found Victory Lane.

“I knew I’d have to push him,” he said. “I slowed things down from the beginning to keep that bull engaged as much as I could.”

“It’s a fighter’s mentality, so it’s either him or me,” Apple said. “You’ve got to channel that every time. There are times when you’re the one who comes out on top but there’s a little bit of fear every time you do it; if you’re not scared, there’s something wrong.

“You’ve got to channel those nerves and use them to your advantage.”