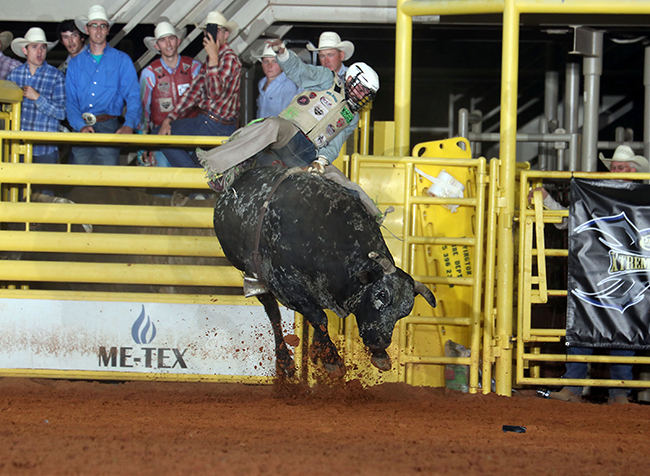 They paid off Tuesday night when he captured the Lea County Xtreme Bulls title and a payday worth $9,231. While he’s had great success in Lovington over the years, this marked his first big victory.

“A win’s important any time, and it doesn’t matter what time of year,” said Spears, a three-time Wrangler National Finals Rodeo qualifier from Redding, Calif. “Over the years, I seem to draw good bulls, and I seem to ride good. It feels good to get a win at a big Xtreme Bulls event like this.”

Spears earned his chance to ride Smash Mouth, a Pete Carr’s Classic Pro Rodeo bull that’s been to the NFR himself, by placing seventh in the first go-round. He rode Stace Smith ProRodeo’s JoJo for 79 points.

Then in the championship round, he and the big black bull matched moves for 90 points. It was the third time the two gladiators had been matched up, and it showed. The first occurred last December at the NFR, and Smash Mouth won the war. Then two months later during the in San Angelo, Texas.

“I drew him again this year in San Angelo short round,” he said. “I rode him for 88.5 points. I felt like tonight’s ride was about the exact same trip. He looks a lot nicer than he feels. He’s definitely you can win on if you can ride him.”

Heading into this week, Spears sat 21st in the world standings. His earnings in Lovington have already moved him to 16th, so he’s closing in on that sweet spot – only the top 15 contestants in each event at the conclusion of the regular season advance to the NFR.

“Everybody’s goal is to win as much money as they can,” he said. ‘You set a goal at the beginning of the year to win the world title. You’ve got to make your way to the finals to give yourself a shot at that.

“This is a great boost, but really it’s more money to keep me going down the road. I’ll keep entering, trucking down that road, riding my best and getting on everything I can get on to make the finals. Whatever’s going to happen will happen. I just have a positive mindset, nod my head and hope for the best every time.”