Overtime pays off for Schueth 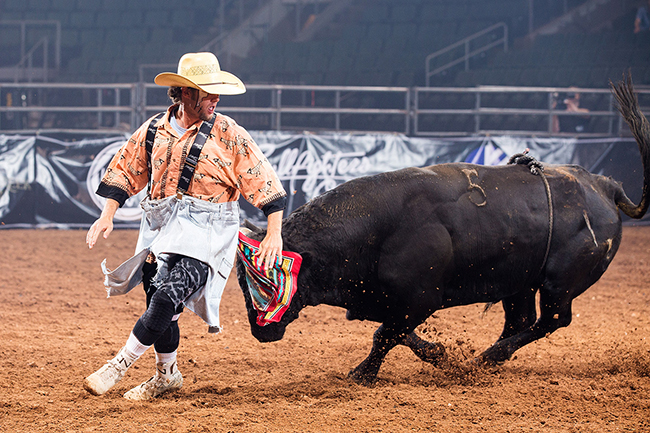 LEWISTON, Idaho – Beau Schueth fought more bulls last week during the Lewiston Roundup than any other man in Bullfighters Only, and he made it pay off with the BFO Wrangler Bullfight tour victory.

Schueth scored an 85-point bout in the opening round but finished second to Ross Hill, who posted an event-high 91-point fight on opening night. That sent Shueth to Friday’s wild card round, where he scored 83 points to advance to Saturday’s Hooey Championship Round.

“Ross had a good, clean fight with a hot bull in the first round,” said Schueth of O’Neill, Neb. “If I hadn’t gotten hooked twice, I would’ve had a chance to be closer to Ross, but I’ll take what I got.

“It means a lot to come through the wild card and win. Last year it was just two days, and I won my round, but the highest score got the rifle. I was 89 points on the first day, and Justin Josey fought (2017 BFO Bull of the Year) Sid Vicious the second day and beat me by half a point.”

The Nebraskan now owns the Henry Golden Boy 30-30 rifle, and he’s happy to put it on display in his home. He also pocketed $5,500 and moved to No. 3 in the Pendleton Whisky World Standings. That’s valuable as he makes his late-season chase for the 2018 BFO world title.

The key was having the right bull in the final round. Schueth matched moves with Costa Fighting Bulls’ Portuguese Power for 86 points, edging Hill’s 83 and Josey’s 80 to win the championship.

“That was my third time fighting Portuguese Power,” Schueth said. “I would have been happy with any of those bulls, but it was good to see him. I knew I’d really have to push on him and keep him going. That bull really fired, and we got it pretty close to the chute.

“I’ve been drawing older, smarter bulls that have made me work for it. To put a complete fight together meant a lot and pumped me up.”

His second win of the season came with the appreciation of a packed crowd in Lewiston. Fans have grown fond of the shows that BFO produces. The revolutionary group hosted a successful stand-alone event there in 2017, and the bullfights have been part of the community’s rodeo since 2016.

“Anything with Bullfighters Only is great,” said Kirby Meshishnek, one of the directors for the Lewiston Roundup. “In the three years we’ve had the BFO, we’ve never had a bad night. The crowd loves it.

“BFO adds a different type of Western excitement; it’s an action sport. It brings a different audience to the rodeo. It brings your wild and reckless group, not just your average rancher that loves rodeo.”