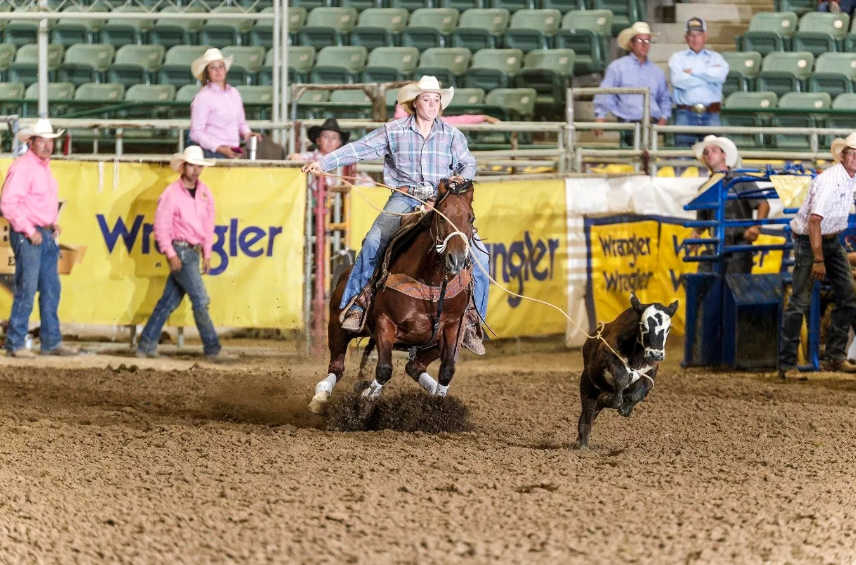 ALVA, Okla. – A year ago, Taylor Munsell sat in Colby, Kan., not sure which way to turn.

Her grandmother, Cindy Hunter, was in the hospital and not doing well, and Munsell was set to rope the next morning at the Colby Community College Rodeo. Her family urged her to compete, and the Northwestern Oklahoma State University breakaway roper had hopes of earning a spot in the championship round to fight for the title.

She finished 11th in the opening round; only 10 qualify for the short round. She packed up and headed south.

“I didn’t get there in time to see my grandma before she passed,” said Munsell, a senior. “So, I came back this year wanting to win Colby for that reason.”

Mission accomplished. The Arnett, Okla., cowgirl posted a 2.4-second run to win the first round, then followed it with a 2.5-second run to finish second in the short round. The average championship was dedicated to her grandmother.

“She’d been battling heart issues for a long time,” Munsell said. “She was one of the bigger inspirations to my life. She was a tough lady.”

So is her granddaughter, who finished second in the Central Plains Region standings last season and was part of the Northwestern women’s team to compete at the College National Finals Rodeo. After suffering two no-times in Casper, Wyo., this past June, Munsell went back to work for the third round.

“I knew my odds of winning the third round were that much better,” said Munsell, who broke the arena record with a 1.8-second run. “My percentage of catching one was going up by the minute.”

But her record was short-lived. The next day, Whitney DeSalvo beat it by one-tenth of a second. Meanwhile, the Munsell continued to pay close attention and take every lesson offered her in Casper.

“The college finals is an awesome place and really gets you motivated,” she said. “Setting that arena record in that one round gives you a good taste of it, even if it was for just one performance. Now I’m ready to go back and win it.”

She has nine more rodeos in the Central Plains season to earn her way back to the finale. She wasn’t the only Northwestern cowgirl to find some success in northwest Kansas. Bailee Prom placed in both rounds and was fourth in the average, while Ashlyn Moeder earned points by finishing fifth in the short round and average.

For the men, Riley Wakefield placed in both rounds of tie-down roping and finished second overall. While heeling as a team roper, he finished sixth in the opening round while competing with Denton Halford of Southeastern Oklahoma State University.

Steer wrestler Bradley Ralph finished second in the average after placing in both rounds, but he wasn’t alone. Wacey Dorenkamp and Colt Madison also placed in both rounds and the average; Dorenkamp was third, while Madison was fifth.

“We have a really strong team this year,” Munsell said. “It was a rocky start, but we have a lot of really talented people, so we’re going to make a strong comeback.”