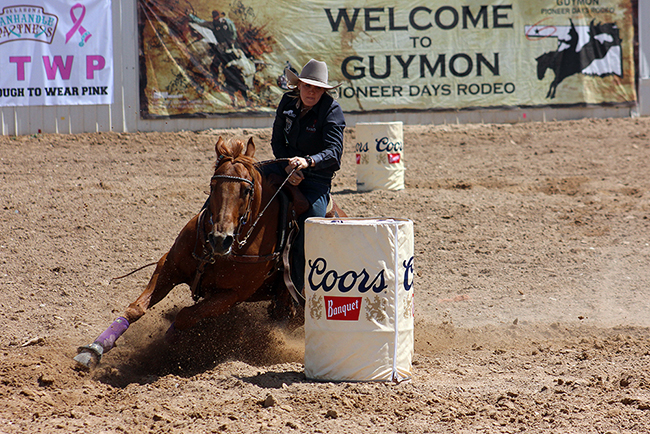 DUNCAN, Okla. – For the past four months, Kylie Weast has traveled the country chasing her gold buckle dreams.

She’s competed at rodeos in Arkansas and Washington and every state in between, following a family tradition that is three generations deep. As a barrel racer, she follows in the footsteps of her grandparents, Dale and Florence Youree, in showing great horses in the most profound way she can.

She’s going now, celebrating another big milestone in a whirlwind year that has seen her earn nearly $100,000 rounding the cloverleaf barrel-racing pattern in rodeo, $23,262 in the Prairie Circuit. Now she will lead a pack of 12 ladies in the Oklahoma-Kansas-Nebraska region to the finale. In December, Weast will be part of that exclusive field at the NFR.

“I needed that money from all those circuit rodeos to count for the world standings,” said Weast, who had earned $99,917 heading into the final week of the 2018 regular season, which concludes Sept. 30. “It worked out well. I’m excited to be competing in Duncan at the circuit finals. My family will get to come see me.”

Her family knows the game well. Florence Youree qualified for the first NFR in 1959 and numerous subsequent championships. Weast’s mother, Renee Ward, earned an NFR bid in 1985, and older sister, Janae, was a three-time qualifier who won the world championship in 2003.

Now they’ll be in attendance to see Weast run for the circuit championship. She leads the barrel racing standings and is $6,247 ahead of the No. 2 cowgirl, 2016 regional titlist Emily Miller of Weatherford, Okla.

“The things I’m looking forward to is that the circuit finals pays so well, and I get to go home every night,” the Comanche cowgirl said. “I’ll also have my family and friends there, all those people that have been following me from this rural community will have a chance to see what it’s about and at a championship event.

“The really cool thing is that if you win the year-end title or the average at the circuit finals, you get the chance to go to Florida. That’s a big plus. You get a chance to earn all that money that counts for next year. You also get a chance to take your family to Florida and have some fun while you are there.”

The two champions from each circuit advance to the RAM National Circuit Finals Rodeo, which takes place each spring in Kissimmee, Fla., just a few miles from Walt Disney World. For now, though, her focus is on finishing the circuit season strong in her backyard.