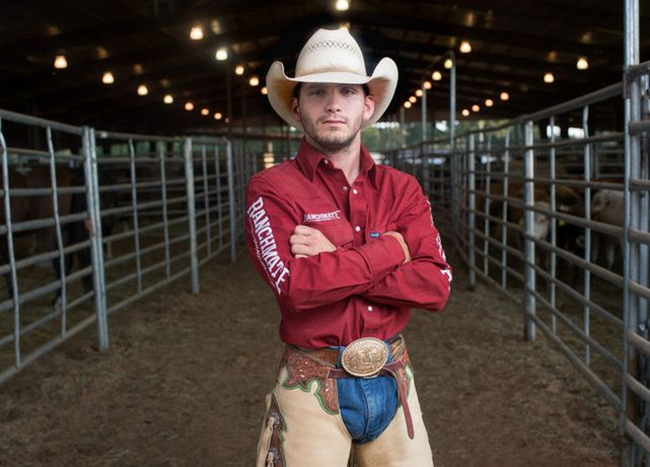 DUNCAN, Okla. – A rod and four screws is what holds Joe Lufkin’s lower left leg together.

Lufkin, the 2013 saddle bronc riding year-end champion in the Prairie Circuit, had led the region standings much of the year. He held more than a $7,000 advantage when the regular season concluded in mid-September.

But he was concerned his injury would keep him from riding in the championship, the Chisholm Trail Ram Prairie Circuit Finals Rodeo, set for 7:30 p.m. Thursday, Oct. 18-Saturday, Oct. 20, at the Stephens County Arena in Duncan. Would that be enough to allow Hardy Braden of Welch, Okla., or Tyrel Larsen of Weatherford, Okla., the opportunity to catch him?

“I don’t have to worry about that anymore,” said Lufkin, 25, of Sallisaw, Okla. “The doctor said I should be good to ride. He said it may hurt, but unless I get stepped on, I won’t reinjure my leg by riding.”

Lufkin was injured Sept. 7 in Puyallup, Wash., and surgeons there operated the next day. That metal rod is attached to his left tibia to hold the bone together. But Lufkin’s injury was a compound fracture, meaning the fibula also was broken. That’s where his concern was regarding a return to bronc riding. But doctors are confident that rod will protect both bones.

“I didn’t even need a cast,” he said. “I was put in a walking boot, and they gave me crutches. I’ve been able to walk on it in the boot without the crutches.”

Now he’ll have the chance to ride without them, too. That’s a good thing.

Lufkin has competed strongly all season. He earned nearly $45,000 this season, with more than $17,000 coming in the Oklahoma-Kansas-Nebraska region. The key was consistency; though he had a few wins at some small rodeos, he placed at nearly every event in which he competed inside the circuit’s borders. That’s vital for success.

Now he’s forced the hands of Braden and Larsen. One of them must win every round and the average in Duncan in order to catch him, and Lufkin can’t earn any money. In rodeo, dollars equal championship points, so the cowboy with the most money won at the conclusion of the season will be crowned year-end champion.

“I won it in 2013, when I was on my PRCA permit,” Lufkin said. “It’s your home circuit, so winning it is great. I got to go to the (RAM National Circuit Finals Rodeo), which was in Guthrie (Okla.) that year. My whole family got to go.”

The year-end and circuit finals average champions earn the right to compete at the RNCFR, which now takes place each April in Kissimmee, Fla.

“I placed at a lot of the bigger rodeos, like Elk City (Okla.) and Dodge City (Kan.), which helped a lot,” he said. “I won a little bit of money at every circuit rodeo I went to, so that was big.”

Now he hopes to limp to the year-end championship, but not without producing a bit of a bang in Duncan to prove his broken leg won’t slow him down much.

“My goal is to go in there and compete,” Lufkin said. “Duncan has been a good spot for the circuit finals. It’s a good facility, and that arena is nice. We had out high school finals there, so it’s almost like competing at home.”

It’s a four-hour drive from Sallisaw to Duncan, but that’s OK. Lufkin hopes for any advantage he can get.