Ganzel ready to rode in Clearmore 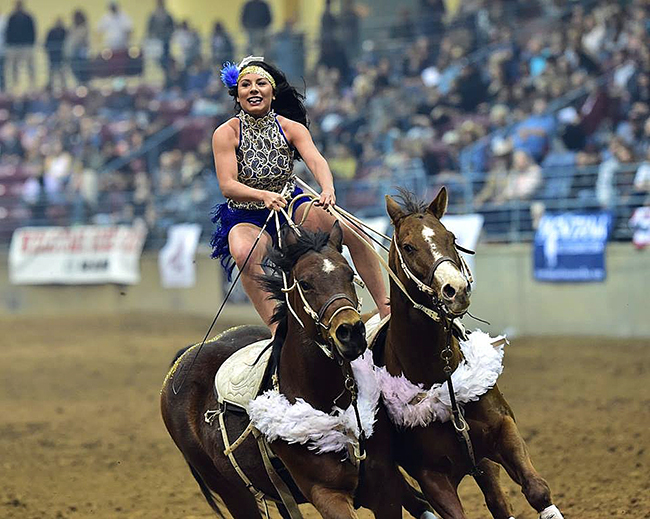 CLAREMORE, Okla. – Haley Ganzel was just 4 years old when she decided on her career.

Now she will bring her talents to Claremore’s Extreme Roughstock presented by the Kubota Center of Oklahoma, set for 7:30 p.m. Saturday, Oct. 27, at the Claremore Expo Center. The event serves as a fundraiser for Child Advocates of Northeast Oklahoma.

“I’m so excited, because I get to have all my family there,” said Ganzel, who lives in Collinsville, Okla., just 24 miles west of Claremore. “It’s going to be a fun event right here close to home.”

In fact, both Sosebee and Ganzel are up for year-end awards in the Professional Rodeo Cowboys Association. Sosebee is one of five nominees for Clown of the Year. Ganzel, with her partner, Lindy Nealey, is nominated for Dress Act of the Year as The Cowgirl Sweethearts.

“It’s such an honor to be nominated,” Ganzel said. “My uncle worked the NFR four times and was never nominated, so I realize what a special honor this is. Everyone on that list has really paid their dues.

“To be on that list with all those people and the legends is amazing.”

She has paid hers since she was a youngster, but that’s because she fell in love with trick riding. She began roman riding when she was 8, riding on the backs of ponies. She and her partner started when Ganzel was 10 and Nealey was 13, then began working in earnest five years later.

“I didn’t know I loved it so much until I got my team four years ago,” she said of the two horses on which she stands and rides. “That makes it so much better.”

Sosebee has been nominated for Clown of the Year seven times and last year was selected to be the barrelman at the Wrangler National Finals Rodeo.

Now he returns to Claremore to help entertain fans during one of the coolest events to hit Rogers County this year. That’s just what everybody needs.