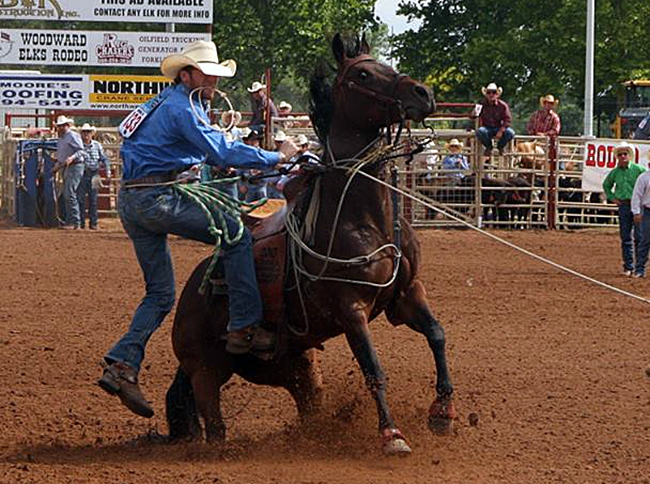 ALVA, Okla. – The deep red dirt that filled the arena at the Oklahoma State University rodeo this past weekend in Stillwater just got darker and thicker as the weekend wore on.

“It was bad,” said Bo Yaussi, a sophomore all-around cowboy at Northwestern Oklahoma State University from Udall, Kan. “The first performance was great. Then it rained, it got deep, and it rained again. It was pretty muddy, but everybody had to rope in it.”

Yaussi did better than most. He placed fourth in the opening round with a 9.3-second run. He finished second in the championship round and the average, scoring big points for himself and the Rangers.

“My theory on short rounds is to leave the arena leading it and make the rest come get me,” he said. “There were three guys after me, and the next guy to rope was long. The second to last guy beat me, and the last guy to rope, the guy that won the long round, missed.”

His plan paid off, but he also had some help. Three Rangers tie-down ropers were in the short round, and all three placed: Jeremy Carney placed fourth in the final round and the average, while Levi Walter placed fifth in both rounds and the average.”

Yaussi transferred Northwestern from North Central Texas College in Gainesville, and he’s now gotten his feet wet in the Central Plains Region. He is second in the tie-down roping standings, just behind teammate Riley Wakefield, and is 12th in the steer wrestling standings.

“This is a very tough region,” the Kansan said. “Team roping has been really tough, and there are a lot of freshman calf ropers that are roping really good. Bulldogging has also been very tough in this region.

“I’m from this area, so I know these arenas. It’s almost like rodeoing on my home turf.”

Aided by another solid performance in Stillwater, the Northwestern men’s team sits No. 2 in the Central Plains Region. The Rangers found limited, yet adequate success this past weekend. Sophomore Bridger Anderson, who qualified for the College National Finals Rodeo last season, placed in both rounds of steer wrestling and finishing as the runner-up.

Bradley Ralph won the first round and was sixth in the short round to finish sixth overall. Jace Rutledge tied Anderson and two other cowboys for a four-way tie for fifth place in the opening round. Anderson leads the bulldogging standings, while Ralph sits third.

Header Taylor Munsell finished fifth in team roping with her partner, Ean Price of Garden City (Kan.) Community College, while the Rangers team of Levi Walter and Jayden Johnson placed sixth overall. For the Northwestern women, barrel racers Kayla Copenhaver (first) and Baillie Wiseman (third) placed in the opening round. They were unable to have fast enough times in the final round to place overall.

But there are seven rodeos remaining on the 2018-19 season, one more set for Oct. 25-27 in Alva. That’s part of the attraction to compete at Northwestern for Yuassi.

Northwestern has been considered the top school in college rodeo for steer wrestling, thanks in large part to coach Stockton Graves, a seven-time Wrangler National Finals Rodeo qualifier and Rangers alumnus.

“Stockton’s got the mental game down,” Yaussi said. “He’s been there and done that, and he knows how to win. Everything he says is from experience. He’s at bulldogging practice every day with us. He puts in a lot of work.”

Now in just his second year of college eligibility, he plans to compete for Northwestern for his final three years. Still, he has some big ideas for this year.

“My personal goal for this year is to make the college finals in calf roping and team roping,” Yaussi said. “We’re hanging right in there for the year-end championship. For the team, I would love to win the region. We’ve just got to keep going strong.”