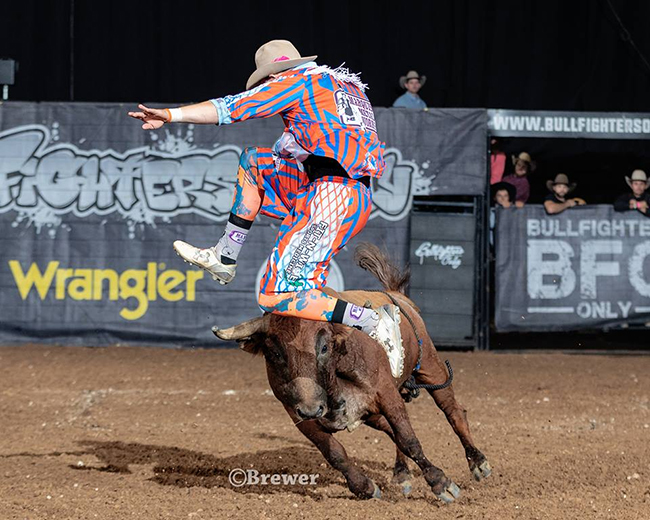 WICHITA, Kan. – A year ago, Cade Gibson was taking part in his first freestyle bullfighting school with educators Cody Webster, Dusty Tuckness and Nathan Harp, all Bullfighters Only pioneers.

This past Saturday night, he competed in his first BFO event, the Wichita Invitational at the Hartman Arena, and marked the occasion with a victory and a $10,000 payday.

“It was a great event with a great atmosphere,” said Gibson, 20, of Pilot Point, Texas. “To be able to compete with guys that have been doing it for a lot of years and to hold my own was great. Sharing the locker room with them was an awesome feeling, and I’m just glad I was able to handle the bulls I had.”

Gibson won his first round with an 80-point fight, bettering Kris Furr, the No. 3 man in the standings, and Chance Moorman, who has been in the Top 15 for much of the season.

“I drew a bull from Wicked Bull Co. from North Carolina; it was the same bull Kris had in the short round in Charlotte (N.C.) a couple weeks ago,” Gibson said. “He was a good bull, real fast and real hot. I stubbed my toe a little bit, got lackadaisical, and he made me pay for it. He balled me up for a second, but I tried to make a strong finish.”

That performance advanced him to the Hooey Championship Round, where he was matched with four other round winners: Zach Flatt, Weston Rutkowski, Beau Schueth and Ross Hill. All have big wins under their belts and had years of experience ahead of the young Texan, but Gibson shined.

“I went back to the locker room and looked at the draw sheet, and I saw that it had a Rockin B & Magnifica bull,” Gibson said. “I knew that whatever Brett Hall brings would be the one to win it all. I drew the best bull in the pen, so it was mine to lose.”

He took some strong lessons from his first bout of the day, and then danced across the Hartman Arena dirt Rockin’ B & Magnifica’s George Jung for 90.5 points and the victory.

In the inaugural Total Feeds Cattle Battle, Rockin’ B & Magnifica finished the night with 659.5 points, 18 points ahead of Wicked Bull Co. Brett Hall and Miguel Nunez earned $10,000 for their herd, which consisted of Spanish Angel, Bet Dream, Ranch Dog and George Jung; they were the four bulls the firm put together to win the inaugural BFO Cattle Battle.

“It worked out for us,” Hall said. “We had to think about this a different way. Take Bet Dream; he had never hooked anybody in his life, but they’re in the high 80s or low 90s on him every time they fight him. He sure tries hard, but he’s not one of the big scary bulls. He’s the one that everybody wants to fight.”