Biglow getting a feel for the NFR

Home - Uncategorized - Biglow getting a feel for the NFR 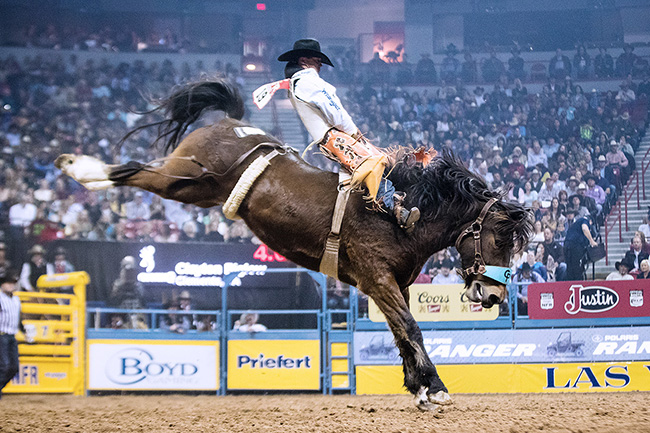 But Biglow didn’t look at his earnings to determine his success this year; he looked at how he rode. Sometimes recognizing a certain feel is a better sign, and that was the case for the northern California cowboy.

“It’s been a better year,” he said. “I paid attention to how I felt all year long, and I felt great until the last few weekends. I seem to finish the years out strong. This year, I didn’t seem to finish as strong as I’d like, but it’s something I can work on now.”

He’s hoping that work will be completed by the time he arrives at the NFR, ProRodeo’s grand finale set for Dec. 6-15 in Las Vegas, where go-round winners earn more than $26,000 a night for 10 rounds. He is $52,000 behind the leader, reigning two-time world champion Tim O’Connell, but that ground could be made up in two nights inside the Thomas & Mack Center.

A year ago, Biglow placed in just three rounds, but they were big payouts; he won the sixth round and placed second in both the seventh and eight rounds. In all, he pocketed $72,403.

“I really learned a lot last year,” said Biglow, who is supported through the year by his sponsors, Bloomer Trailers, Resistol, Wrangler and MY Chevrolet in Salinas, Calif. “I had a rough start, and I wasn’t drawing great. I had a better finish, but I had a lot of riding problems.

“I learned some little things about my riding that helped. There were times I got a little excited. I had a chance to win the world title, and a lot of that was on my mind. I let that get in the way.”

So, he’s redirected his focus as he prepares for those magical 10 December nights in Sin City.

“I’ve never felt like this before,” he said. “I’m not changing anything about my riding but thinking differently and knowing what I have to do ad preparing myself to do it. I’ve always been excited to go to the NFR, but now I just can’t wait to be there.

“I’m going into it differently than I have the last two years.”

“If your head is not in the game, there’s no way you’re going to be able to perform to the best of your ability.”

And as he has matured mentally, his riding has improved. He showed this year by earning at least a share of the title at 14 rodeos; when he wasn’t winning, he was placing among the leaders enough to catch some big checks along the way.

But his biggest accomplishment happened at a rodeo where the money earned didn’t count toward the world standings because it is not associated with the Professional Rodeo Cowboys Association. Still, the Calgary (Alberta) Stampede is one of the largest rodeos in the world with a very large purse.

“It wasn’t even a win; I finished fourth at Calgary, and it was awesome,” Biglow said. “I didn’t draw good in my pool and didn’t advance out of my pool. That was a big deal to me, because I was riding fairly good at the time. I got into the wild-card round, then got past the wild-card. Whenever that happens, it fires you up because you were basically out of it and got back in it.”

Only four contestants advance out of two pools into the championship round. Biglow was not among the top four in Pool A. He then had one of the two highest scores in the wild-card round to advance to the final day.

“I did what I needed to do,” he said. “That’s a tough rodeo. That is, by far, the toughest rodeo I’ve ever been to. It’s like a round at the NFR every time.”

That is just a taste of what he’ll expect over 10 rounds in Las Vegas. It’s not just the town; it’s  more the excitement that happens each December when rodeo comes to Sin City. It’s flying fur and moving spurs, all in rhythm that can be likened to a punk-rock dance.

“Ever since I was a little kid, I always wanted to be there. Each year I go, it feels like the first time going. It’s the World Series, the Super Bowl. That’s what makes it exciting. The money has nothing to do with it. I do this because I love it, and it’s what I do. Riding bucking horses, and on a big stage like that, is what gets me excited every day.”