Clements returning to the NFR 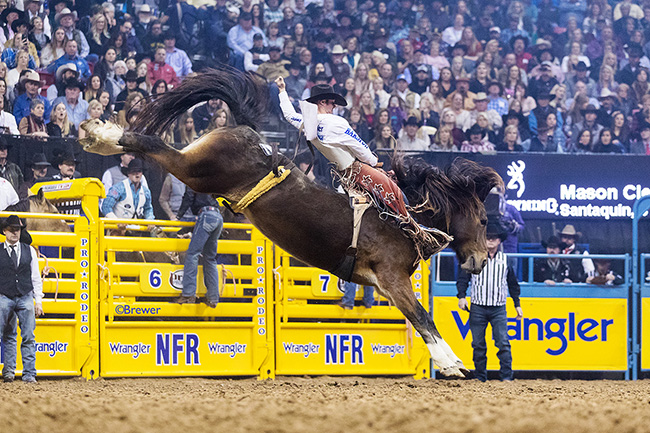 SPRINGVILLE, Utah – Mason Clements takes the right approach to his everyday life: One can learn from every situation, good or bad.

That’s come in handy for the 26-year-old cowboy from Springville, who will take every lesson learned from his first Wrangler National Finals Rodeo qualification a year ago into this year’s 10-day championship, which takes place Dec. 6-15 in Las Vegas.

“This year I can regulate what’s going to happen. I know where I want to be at specific times for a performance.”

Clements was born in Las Vegas and grew up primarily in Utah. He graduated from Alta High School in Sandy, Utah, and has been on the rodeo trail ever since in some form or fashion. As a youngster, he wrestled steers and rode bulls. At age 20, he turned his attention to riding bucking horses, and he’s found a passion.

It’s something he’s been working toward for the last six years with the support of his sponsors – Cinch, Long X Trading Co., BEX Sunglasses, Barstow and Axcess Accident Center in Provo, Utah – and his family: Mom, Tracy Pledger; dad, Doug; brothers, Tyler and Colin; and sister, Sarah.

While the similarities are there for both of his NFR qualifications, many things are different for Clements heading into the 2018 finale.

This marks the second time he’s torn that ligament in his left knee; the first time happened three seasons ago. He also tore his right knee in 2016 and still finished 18th in the world standings. His latest injury occurred this past July, so he took a month off the rodeo trail to heal and rehabilitate his knee, then returned to competition.

Now he heads the City of Lights with a brace he’ll attach to his left knee every night and a strong mind.

“Earlier in my career, I’d overcompensate or not do enough. Being able to adapt has played a big role.”

“I feel very strong,” he said. “I competed at big rodeos the rest of the season, even after I tore the ACL, sat out a month, rehabbed and started back riding. I’ve finally gotten back to how I was before the injury. I’m confident in what’s to come.”

And Clements knows just what that kind of money can do. A year ago, he left Las Vegas with more than $80,000 in his Cinch jeans. He knows he’ll have great opportunities before him when it’s time to battle for gold in the Nevada desert.

“One of the other things that changed for me this year was my finances from the NFR last year,” Clements said. “It changed my life. This year was a big eye-opener for what it could do for me and what it has done for me. IT took me out of all my debt and helped me enjoy not worrying about money.

“I’ve had amazing support from my family and my girlfriend, and that’s been huge. That’s probably made a big difference in the way I’ve performed all year. I’m not worried about things gone on at home. I’m focused 100 percent on my business.”