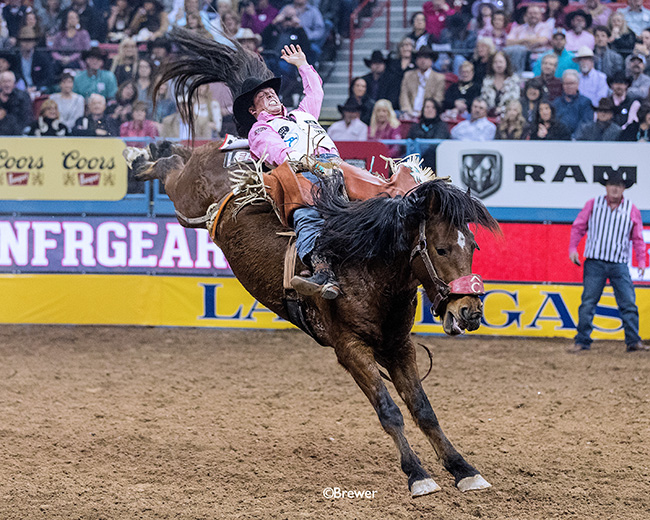 “The ring was burning a hole in my pocket,” he said of his near-New Year’s Day proposal to his fiancé, Paige Lawrence. “We were on a ski trip with her family in Kimberley, British Columbia, and I wanted to ask her dad and her brothers for their blessing. I needed to figure out a way to ask without her knowing.”

He and Lawrence’s father were on a ski lift when Champion got the permission. He found her brothers throughout the day, so the only ones who didn’t know about the proposal were Lawrence and her mother. He dropped to a knee inside the family’s condo on that Jan. 3 day, and the rest is history.

“We were in Canmore (Alberta) for New Year’s Eve, and I really wanted to do it then, but I hadn’t talked to her dad and brothers yet,” Champion said. “Her family’s really important to her. It would’ve been nice to have a romantic setting with fireworks going off, but that’s not her nor me. It was cool to be able to do that with all of them there.”

Now he enters his fourth National Finals Rodeo sixth in the world standings and has the opportunity to cash in even more. ProRodeo’s grand championship features a $10 million purse with go-round winners earning more than $26,000 a round for 10 nights.

“It’s awesome to be going back,” he said. “You expect it because you believe in yourself, but you never take it for granted. You’re still proud of it. Being excited and being proud of that accomplishment never goes away.”

Though the money didn’t count toward his NFR qualification, the win in Calgary was the biggest of his season. Who wouldn’t be excited about winning $100,000-plus?

“That place is special, and you can’t compare it,” Champion said. “The feeling you get when you show up at the Stampede and you run out into the arena before you ride is just amazing. They love that rodeo. To win it once, nonetheless two times in a row, is a tremendous blessing.

“It doesn’t count as far as the standings go, but it is momentum. You feel good about it because the best guys in the world are there, and you’re getting on the best bucking horses.”

How much momentum did he have this year? Champion competed at several rodeos that count toward qualifications for both the NFR and the Canadian Finals Rodeo. He won in Ponoka, Alberta; Rocky Mountain House, Alberta; and Williams Lake, British Columbia, and all that money counted toward both the PRCA and the Canadian Professional Rodeo Association standings.

So far, he’s made the most of those victories and placing along the way at other rodeos. He competed at the CFR the first weekend of November, then walked away from Red Deer, Alberta, with the Canadian title.

“It’s the first time I’ve ever won a season-long title,” he said. “It means a lot to win that title, and to have that momentum going into the NFR is even better.”

“Caleb had a phenomenal year, and he stayed hot,” said Champion, who gives much credit to his sponsors, Yeti, Hooey and Nocona. “When you have someone that has had that much luck, you have to focus on them and not let what’s happening to you get in the way. You want to feed off his positivity. As long as someone in the rig is winning, you have hope.

“I’ve really enjoyed traveling with him the past two years, and we make a good team and push each other. I’m excited to get to Vegas and butt heads with him for a title.”

Now that he’s heading the Nevada desert for the fourth time, he knows what to expect when he gets there. There is a lot of pomp and circumstance that surrounds the NFR. It’s home to only the top 15 contestants in each event, so there’s reason for the fanfare.

For two weeks in early December, Las Vegas becomes a cowboy town. It has become the biggest showcase in rodeo, and the atmosphere in the City of Lights just adds to it. A year ago, Champion placed in seven of 10 go-rounds, finished second in the average and pocketed $167,314. That pushed his 2017 earnings to $268,511, and he finished second in the world standings.

Counting his earnings in Calgary, he has earned more than $600,000 on the backs of bucking horses in the last two years alone, and he’s got 10 more nights left in the 2018 rodeo season.

“My biggest thing is that I want to get in the locker room and get Round 1 started,” he said. “Once you get that first one knocked out, it brings you back and puts you in a state of mind that I’m comfortable with. You get there and feel the energy in the arena, that energy in the locker room, then you are excited for the rest of it.”

He’s also excited about the rest of his life. Champion and Lawrence will marry next May in her hometown of Kennedy, Saskatchewan. For now, though, he knows he can lean on her any time the occasion merits.

“She’s a rock star,” he said of Lawrence, who was raised around rodeo and also is a world-class figure skater who qualified for the 2014 Olympics in pair skating for Canada. “Any step of the way, she has the mindset for the competitive nature of our sport. She’s the reason I rodeoed a little smarter this year. The positivity that I got in the van, she was also feeding me from home.

“I contribute a ton of my success the last two years to her and really changing my mental game. She’s always pushing me to explore options when it comes to training. I couldn’t do it without her.”

That combination has worked well, so he has every reason to believe in it for those miraculous 10 days in Las Vegas.