Champ is confident heading to NFR 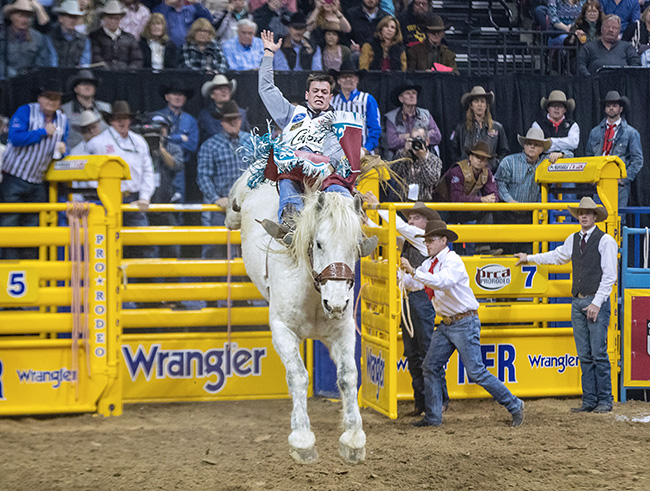 ZWINGLE, Iowa – Tim and Sami O’Connell are more than husband and wife, more than parents to 9-month-old Hazen.

They are business partners, and their business is rodeo.

“She’s the business owner, and I’m just the employee of the month,” he said with a laugh. “She’s always been my rock, and she takes so much off my plate to where all I have to worry about is doing my job.”

That means of the $1.3 million he’s earned in his ProRodeo career, most of it has come it has come in the last 35 months. That also means he has a big target on is back, but he’s OK with that.

“The last two years, I’ve had the same goal in mind, and that’s to be the world champion at the end of the year,” said O’Connell, 27, of Zwingle. “That hasn’t changed. I think it’s become a bigger factor in driving me. I have my little guy, my wife and my village of people, which has pushed me even more.

That’s a big goal, but O’Connell has proven that he has all the capability to make it happen. He also has a renewed vigor to his job. That came the day Hazen was born.

“I have even more responsibility on my plate right now,” he said. “We added one more mouth to the table, and I take that responsibility very seriously. As the man of the household, my job is to provide for my family, and I provide by being the best athlete I can be.

“My workout regimen is going well. I feel prepared physically and mentally with a couple weeks to go.”

Over the course of the regular season, O’Connell won at least a share of 23 titles. From big rodeos to small payouts, it all added up to an amazing year for the champ. He didn’t have quite the success early in the season as he would have liked, but that changed in April, when he shared the victory at the National Circuit Finals Rodeo with Mason Clements.

In all, O’Connell pocketed nearly $27,000 in Kissimmee, Fla. That was a huge boost to his place on the money list and to his confidence.

“My winter was really off for me,” he said. “I didn’t perform how I expect to. We were waiting on Hazen to be born, and I think that played a bigger role on me than I wanted it to. I didn’t have the killer instinct that I have when I get on the back of a horse. I had the whole family in Florida with me: my brother was picking up at the rodeo, and my dad was on the back of the chutes.

“I showed up there and was ready to win. That win brought me back into the race. The season-leader race was starting to get out of hand; Caleb Bennett had a $50,000 lead over the top of me, and I was ready to do the work that needed to be done to get back in the driver seat. When I made that move, my swagger came back, and it took off from there. That was my first rodeo win of the season, then it just kept rolling.”

When he can’t be home, he, Sami and Hazen talk several times a day, and they always make time for daily video chats. O’Connell also makes sure to get home as often as possible.

“I always like coming home and recharging my batteries and spending time with my family,” he said. “It’s tough being gone. I like hanging out with my little buddy and wife. When we leave, we make our wives into single moms. But Sami reassured me that I needed to go out and do my job and not be worried about what’s going on around the house.

“It gets easier the longer you’re gone. Once you get out there and start performing, you just have to get into a rhythm. It’s bittersweet. You can’t imagine how these kids can change so fast.”

“When you grow up, you want to be that guy that people want on their team,” O’Connell said. “When they call you and ask you to be an endorsee, it really is an aw factor. I’m humbled that these companies wanted me to be part of their brand.”

All that support – whether it’s from sponsors, his family or fans – is encouraging for O’Connell as he makes this way through life one bucking horse at a time. He knows just how special it is to compete at the NFR and be among the very best in the world.

Las Vegas in December is a different city. It becomes a cowboy town for two weeks, and the vibe is much different than it is the other 50 weeks of the year. The NFR celebrates its 60th anniversary this year, its 33rd championship in the City of Lights.

“There are 30,000 emotions that hit you at once,” O’Connell said of the NFR experience. “I’m with the best guys in the world on the best stage in rodeo.

“I remember going into my first NFR, and Kaycee Feild was winning. We were all shooting for him. I like when they are shooting at me. It’s going to take someone to have the best year of their life to beat me. I’m going into my fifth NFR, I am ready to defend my title, and put on my best performance yet.

He’s got that swagger going, the one that owns two Montana Silversmiths gold buckles already. But with his swagger comes a contentment and humbleness that is strongly identified through his faith. That’s how he plays the game and why he is so good.

“I look at how I prepare myself, and it’s only gotten better with my experience,” he said. “It’s not my plan; it’s God’s plan, but I feel like God and me are on the same page right now.”