Duvall returns to Vegas for NFR 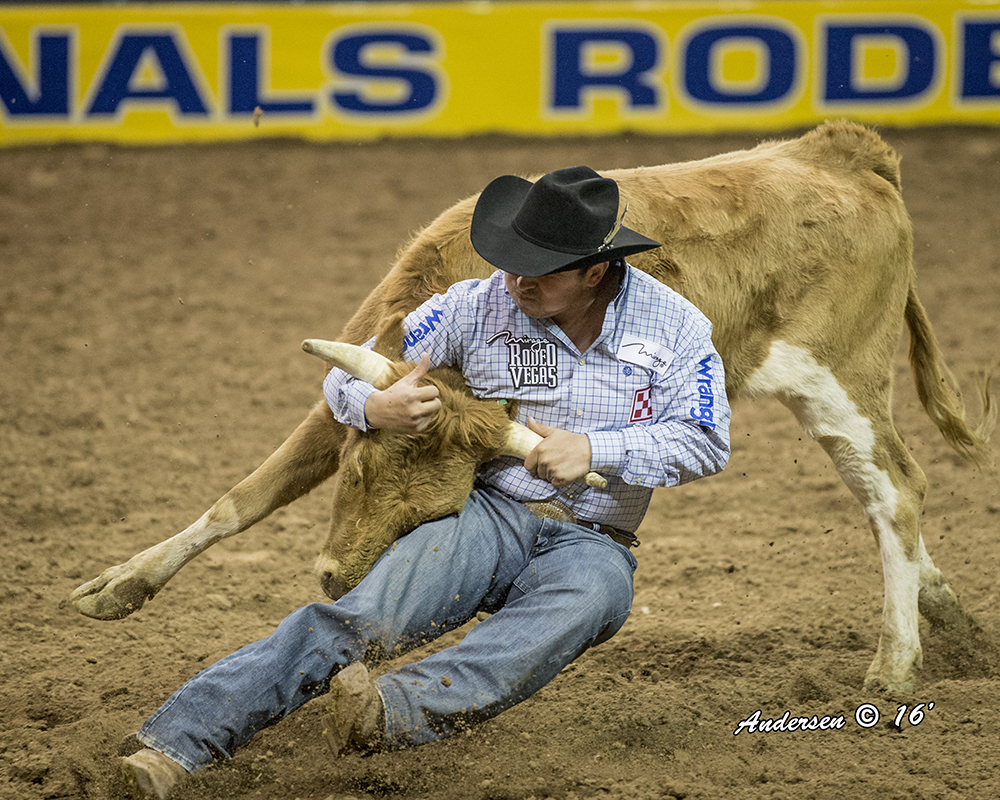 CHECOTAH, Okla. – Much has changed since Riley Duvall’s first qualification to the National Finals Rodeo two years ago.

“I just feel more experienced heading back to the NFR,” said Duvall, 26, of Checotah. “In 2016, I went out there with a deer-in-the-headlights look. I just wanted to do good and not make myself look bad. Now I feel more confident, and I’m ready. I have way more confidence going into it this year.”

That’s a good thing. Confidence is key for any athlete, especially those competing on the biggest stages of their sport. That’s the case for Duvall, whose father, Sam, qualified for the NFR in 1987 and ’88.

The bulldogging legacy began with his great uncle, Roy, a three-time world champion who qualified for the NFR 24 times, including 21 straight from 1966-1986. Riley’s grandfather, Bill, was Roy’s hazer most years he competed at the finals. Riley’s uncle, Spud, was a two-time qualifier, and their cousin, Tom, has also played on ProRodeo’s biggest stage.

“I’ve never felt pressure by that,” Riley Duvall said. “Ever since I first got in the practice pen, I’ve had the best guys in the world helping me out. I learned not to ever be intimidated by those guys. You show up at a rodeo, and you don’t worry about who’s there. It’s just bulldogging.”

But he understands the gamble that comes with the game. There are no guarantees in rodeo, and contestants must pay entry fees in order to compete. The only way they earn any money in the sport is by finishing better than most. This season, he pocketed $77,643. In a sport where dollars equal points, he heads to the NFR 12th in the world standings.

Now, he has a chance to cash in big time at the world’s richest rodeo, featuring a purse of $10 million paid out over 10 December nights. Go-round winners will earn more than $26,000 each night. Two years ago, he earned just shy of $68,000.

“Making it back this year means everything to me,” he said. “After not making it last year, money got really tight. This year was do or die. I haven’t won anything out there yet, but I have the opportunity to go ahead and keep rodeoing.”

That’s how he makes his living. He travels the country wrestling steers in order to make ends meet and put food on his family’s table. There have been some lean times, and some came in the 2017 season. He finished the regular season No. 31 in the world standings – only the top 15 on the money list in each event play for the biggest prize money in the game.

“It was pretty darn close to where I had to quit rodeoing,” Duvall said. “When you’re broke, it just makes me want to try harder. I know if I don’t do good or find a way to make money rodeoing, it’s going home and getting a job. I know that’s probably inevitable at some point, but I don’t want to do it right now.

“After I won Waco (in October 2017 to start the 2018 regular season), I was getting close to not being able to rodeo, then I won that and had a little money behind me.”

That’s why he set the goal to stay on the rodeo trail through the end of the regular season on Sept. 30. Some cowboys realize their chances to make the NFR are dashed by late July, so they pack up their gear and return home until they can afford to hit the road again. Duvall found a way to cash in and earn his way to his second NFR in three years.

“There are times when hazing for people saved my butt and kept me on the road,” he said, noting that he gets a percentage of the earnings other cowboys make if they ride his horse or have him haze for them as they make their runs. “I have an older bulldogging horse that I used this year. I won the circuit on him in 2011, then I won it on him again this year.”

He is a two-time winner of the year-end title in the Prairie Circuit, which is made up of rodeos in the Oklahoma-Kansas-Nebraska region. He’s a three-time winner of the Prairie Circuit Finals average championship, and his most recent twin titles in the region came in October, when he utilized the average win in Duncan, Okla., to win the year-end title again.

“That was a tough bulldogging,” he said of the regional championship. “I think there were four NFR qualifiers from this year in that field and eight NFR qualifiers altogether. It was my last rodeo of the year. To go out like that puts a cherry on my fall and really gives me momentum heading into Vegas.

“I had one big win this year at the All American Finals, which was in October of ’17. I didn’t win the rodeo, but I won the two-head average at Puyallup (Wash.). I won just under $11,000 there, and that rodeo pushed me up. I technically had the finals made after that rodeo, so that was a year-changer.”

Although Duvall is 12th out of 15 men competing for the Montana Silversmiths gold buckle. He trails the leader, Canadian Curtis Cassidy, by about $28,000; Duvall can make up that ground by the second round in Las Vegas.

“The last time I was at the NFR, it took me six rounds to figure out how fast the start was,” said Duvall, who credits much of his support to his sponsors, Wrangler, Purina, Stierwalt Superflex, Cowhorse Supply and the Mirage. “This year I’m going to try to win the first round. Of course, my main goal is to try to place every night. I gave everyone a head start last time.

While in Vegas, he will ride a horse owned by fellow steer wrestler Darrell Petry, who will serve as hazer, helping Duvall keep the steer running in a direct path to provide the steer wrestler with the best opportunity.

“That is the fastest horse I’ve ever rode from the corner (of the timed event box) to the steer,” Duvall said. “He explodes out of the box very aggressively. I like him for me because I can get off a jump or two early, and he still gets me there.”

Of course, there’s no greater support than what he has at home. It’s not just a family of bulldoggers that supports him; Duvall has a strong cast of characters with his wife, Megan, and their 3-year-old daughter, Chaney.

“Megan does a great job raising our child, and she’ll do anything I need,” he said, explaining that his wife was opening gates and videoing runs on a recent practice that took place in near-freezing temperatures. “She also motivates me. She was a five-time state champion in volleyball and basketball in high school, so she has a winner’s mentality.

“That helps a lot whether I’m working on things at home or I’m struggling on the road.”

Being on the rodeo trail means Riley Duvall is living his dreams chasing that elusive Montana Silversmiths gold buckle. It also means months away from the ones he loves the most.

“Yes, it’s hard leaving home,” he said. “She’s 3 now, and she knows that when I’m packing my bag that I’m about to be gone. She knows I’m leaving, but it sure makes you appreciate things more when you’re home.”

When he returns at the conclusion of ProRodeo’s grand finale, he hopes to be sporting the 2018 world champion’s gold buckle.