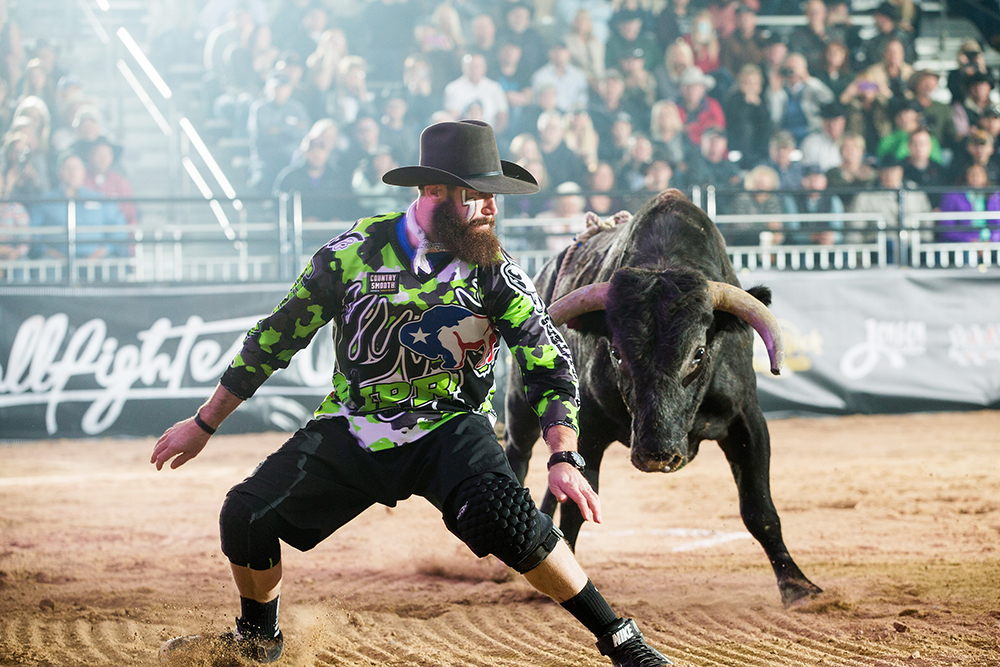 LAS VEGAS – Brett Hall isn’t one to get too excited about things, but he’s sure fired up about what’s going to happen during the Bullfighters Only Las Vegas Championship.

“This will probably be the best pen of bulls I’ve ever hauled anywhere,” said Hall, co-owner of Rockin’ B & Magnifica Fighting Bulls. He’ll see all of his top bulls in action during the marathon championship, each day at 2 p.m. Dec. 6-15 at Tropicana Las Vegas.

“The atmosphere is going to be great there. For me, if it’s a bullfight, I’m enjoying it.”

Rockin’ B & Magnifica is the BFO’s reigning Stock Contractor of the Year and will have more than two dozen bulls as a part of the event. That’s a lot, but still only a quarter of the bull power that will do battle in Sin City over the 10 days.

“That’s the one thing that stands out when we go to Vegas,” said Weston Rutkowski, the reigning two-time world champion from Haskell, Texas. “The bulls have had substantial time off, and it shows when they get there. When they have a few months off heading into Vegas, they show up ready to fight.”

The 10-day championship kicks off on Thursday afternoon with the Roughy Cup, BFO’s original event, and will be broadcast live on the Wrangler Network.

“Having the best bulls is huge,” said Kris Furr, the No. 3 man in the standings from Hamptonville, N.C. “It doesn’t matter what round you’re in; there’s still a lot of pressure, and you need to be 90 points to win. I’d like to have one of the older bulls that’s seen it and been around it.”

There will be a wide array of bulls that will be in the mix, so setting up each round with bulls of similar caliber ensures that the fights are as evenly matched as possible.

“When we are setting up the rounds, we try to make sure that each of the three bullfighters have a chance to win,” said Aaron Ferguson, founder and CEO of Bullfighters Only. “We want it to come down to who has the best bullfight, not just the best bull.”

Manuel Costa’s Sid Vicious, the reigning BFO Bull of the Year, is a contender to repeat in 2018.

“There aren’t many bulls that you can fight that will just mop you up around the arena, and you can still win, but that’s the case with Sid Vicious,” Furr said. “Last year he was the second-to-last bull I fought, and I won the round on him, but we were 50-50; he would hook me, I’d stand up and put one on him until he’d hook me again.”

Costa knows he has some special animals in his herd.

“I’ve seen the names of the bullfighters that are coming, and they’re not afraid to fight any of these bulls,” he said, noting that he will have between 30-40 bulls in Las Vegas. “We’re very honored to have as many bulls as we have there. It means a lot that they like what we’re doing. They believe in the bulls that we have.

“This is the big show. This is the end of the year, the last event, the Super Bowl.”

Costa and Rockin’ B & Magnifica will be two of half a dozen contractors providing bulls for the Las Vegas Championship. The BFO has sought out the top fighting bulls in the country to showcase with the best bullfighters that the sport has ever seen.

“Having great bulls means everything,” Rutkowski said. “I’m only half the battle. I need bulls that not only showcase their ability but also showcase my ability.”