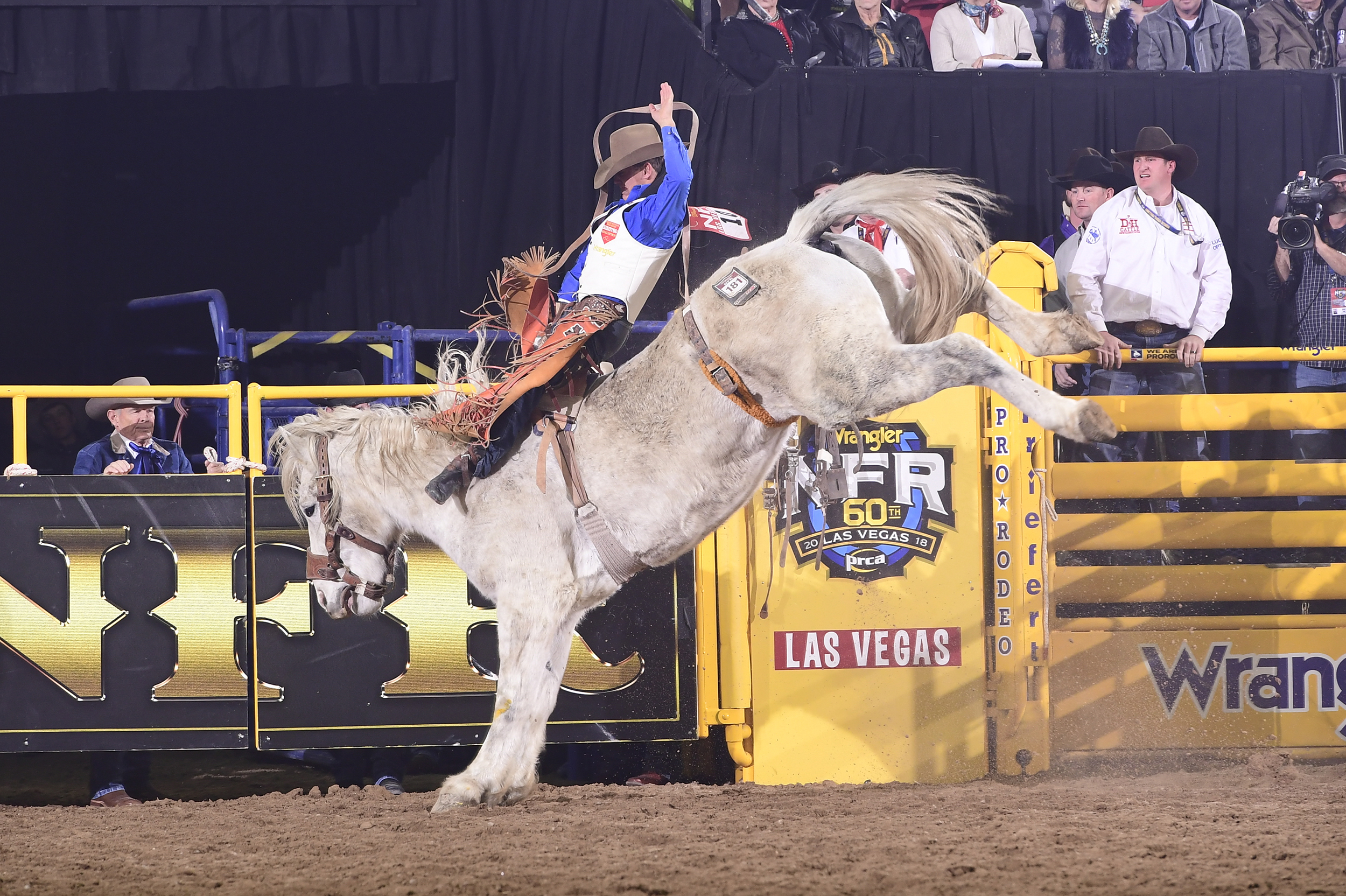 LAS VEGAS – Craig at Midnight is a giant of a bucking horse. Weighing 1,800 pounds, the gray gelding from Powder River Rodeo can be a bit intimidating.

“He’s a huge horse,” said Clayton Biglow, who rode the animal for 85.5 points Thursday night to finish in a tie for fifth place on the eighth night of the National Finals Rodeo. “He is like crawling down on a bull. He has that scare factor to him, because he’s kind of bad in the chute. He doesn’t just stand there like the rest of the horses.”

He added $5,500 to his Wrangler jeans, pumping his NFR pay to just shy of $72,000. Though he dropped a spot in the world standings to Canadian Orin Larsen, Biglow has pushed his season total to $206,935, and it did that on the back of a former horse of the year

“His second trip here is usually weaker,” Biglow said, noting that reigning two-time world champion Tim O’Connell won Round 3 on Craig at Midnight with an 88.5-point ride. “He still felt bucky underneath me, that’s for dang sure. There is a lot of horse there, and you can still feel it no matter what.”

He is $566 behind Larsen, so he could easily move up a spot in the world standings in the next two rounds, the final two nights of the ProRodeo season.

“That’s nothing here,” he said. “The last two days, you just give it everything you’ve got. I’m in no situation to hold back right now, so just go out there and try to make the best possible ride you can make on whatever horse you draw.”

For Biglow, though, he just wants to keep his focus in the right place. He has all the physical attributes necessary to be in the mix for a world championship race. He’s been there each of the last three seasons. At 23 years old, his maturation is starting to reveal itself in his mental approach.

“The first few rounds were good, but I was getting ahead of myself,” Biglow said. “Now I can relax and trust my body, let it do everything that I’ve taught it to. Now it’s just go out there and have fun. We don’t have the eliminators anymore, so you can take a deep breath and know you’re going to get on a good sucker.

“I felt like I rode really good tonight, even though Craig didn’t have his day. Everything that I’ve been working on I put to work tonight, so (on Friday) it’s just go out and do the same thing.”

It’s the perfect play to finish out his 2018 season.