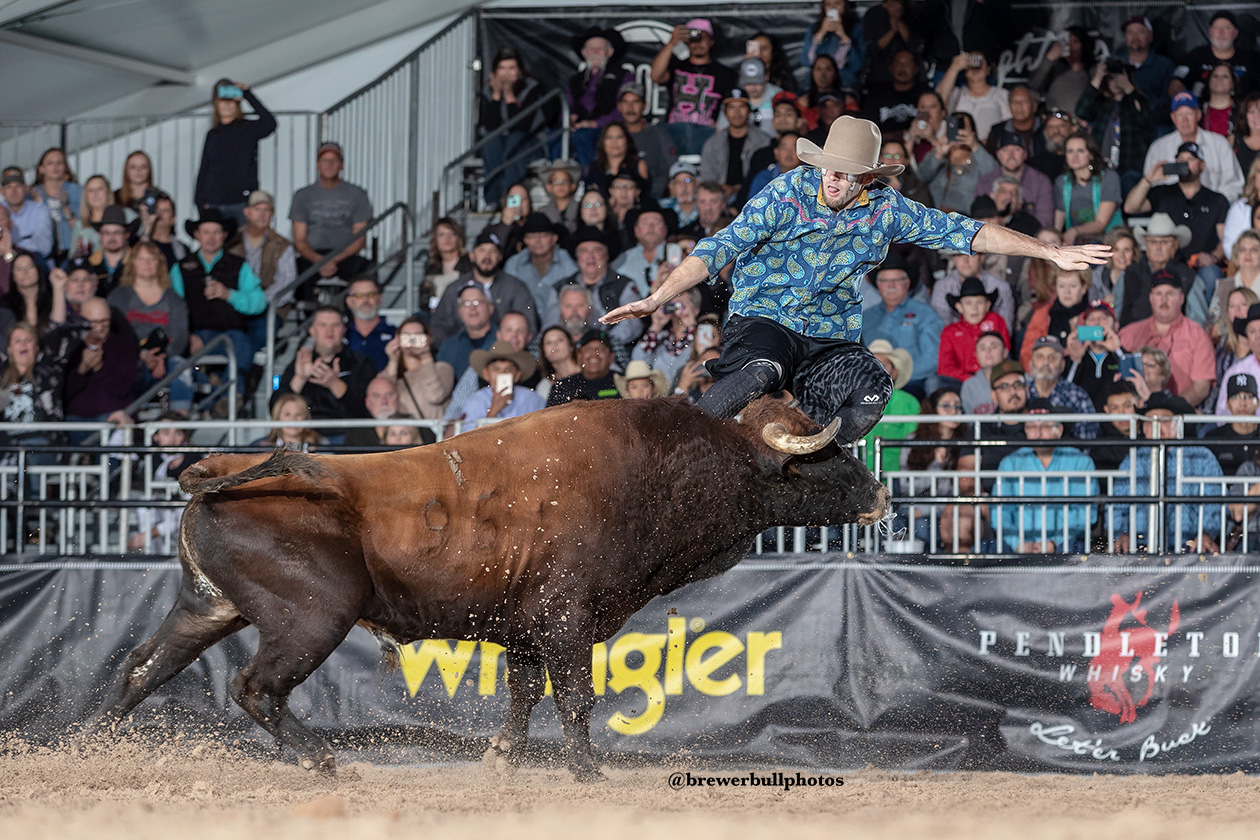 LAS VEGAS – Beau Schueth is at the top of his game and the right time.

A week after winning the Bullfighters Only Roughy Cup and the Wrangler Bullfight Tour championship, Schueth put together his second straight 86-point bout Thursday during the final performance of the Flexflit Preliminary Rounds of the Las Vegas Championship.

“Advancing to the final day is huge,” said Schueth, the No. 2 man in the Pendleton Whisky World Standings from O’Neill, Neb. “If, for some reason, I was going to have to go through the Wild Card Round, it wasn’t going to bother me much because I’ve gone through Wild Card Rounds all summer.

“But if I didn’t have to fight and could have a day off, that’s what I preferred. Another day of rest means a lot when you’re fighting five or six bulls.”

Schueth won his flight with a two-bout cumulative total of 172 points. He moves on to Championship Saturday and will join Chance Moorman of Lytle, Texas, who scored 88.5 points, the highest score so far, and Colt Oder of Moorpark, Calif., who got through a tough bull to slip into the final day of competition.

“I saw the bulls, and I actually fought that bull in the first round in Industry, Calif.,” Schueth said. “He was good there, so I knew he would fight good here. I didn’t want to bust him down (with fakes) too much, because I didn’t want to give him a chance to run off. It was a grind the whole time, but luckily it worked out in my favor.”

The other three men who advanced Wednesday were Andres Gonzalez, Tucker Lane McWilliams and Ross Hill. The final six to advance to Saturday’s performance will come out of Friday’s Wild Card Round, including reigning two-time world champion Weston Rutkowski.

“I’ve had a taste of it, but when you’re reading bulls well and drawing well, there’s no pressure on you,” said Rutkowski of Haskell, Texas. “He’s got a lot of confidence, and he’s going to be one of those guys that’s going to be tough to beat come Saturday. He’s fighting well at the right time of year and drawing the right bull to showcase his abilities.”

That’s been the case since Schueth arrived in Sin City last week. He’s been the hottest bullfighter in the game since, and he now trails Rutkowski by only $6,300.

“My confidence is pretty high, and I’m feeling good and healthy,” Schueth said. “I’m just having a blast out here. Going from sitting out last year and watching all my friends put on these great bullfights got to me. I’m just tickled to be sitting in this position.”

The Nebraskan doesn’t say much, but he has something inside that allows him to excel inside a bullfighting arena. As one of the BFO pioneers, he’s proven why he’s in a position to battle for that coveted title belt.

“We’ve been friends for a long time,” Rutkowski said. “He’s one of those guys that you wouldn’t think he’d have the desire to do the sport, because he’s so soft-spoken.

Both men hope Rutkowski advances through Friday’s round so the No. 1 and 2 men in the standings can go toe-to-toe for the world championship.

“That’s exactly what I want,” Rutkowski said. “I don’t want to go in there and win a world title and not go against the best in the world. In my mind, I’m going against Beau Schueth in the final round for the world title, and I wouldn’t have it any other way.”

No matter the sport, all fans want to see the top two in the game meet up to the challenge.

“That would be amazing,” Schueth said. “He’s one of my best buds out here. I’d love for him and me to be facing down and let it come down to who has the better fight in the short round to win the world title.”