Mindemann places 2nd in Round 9 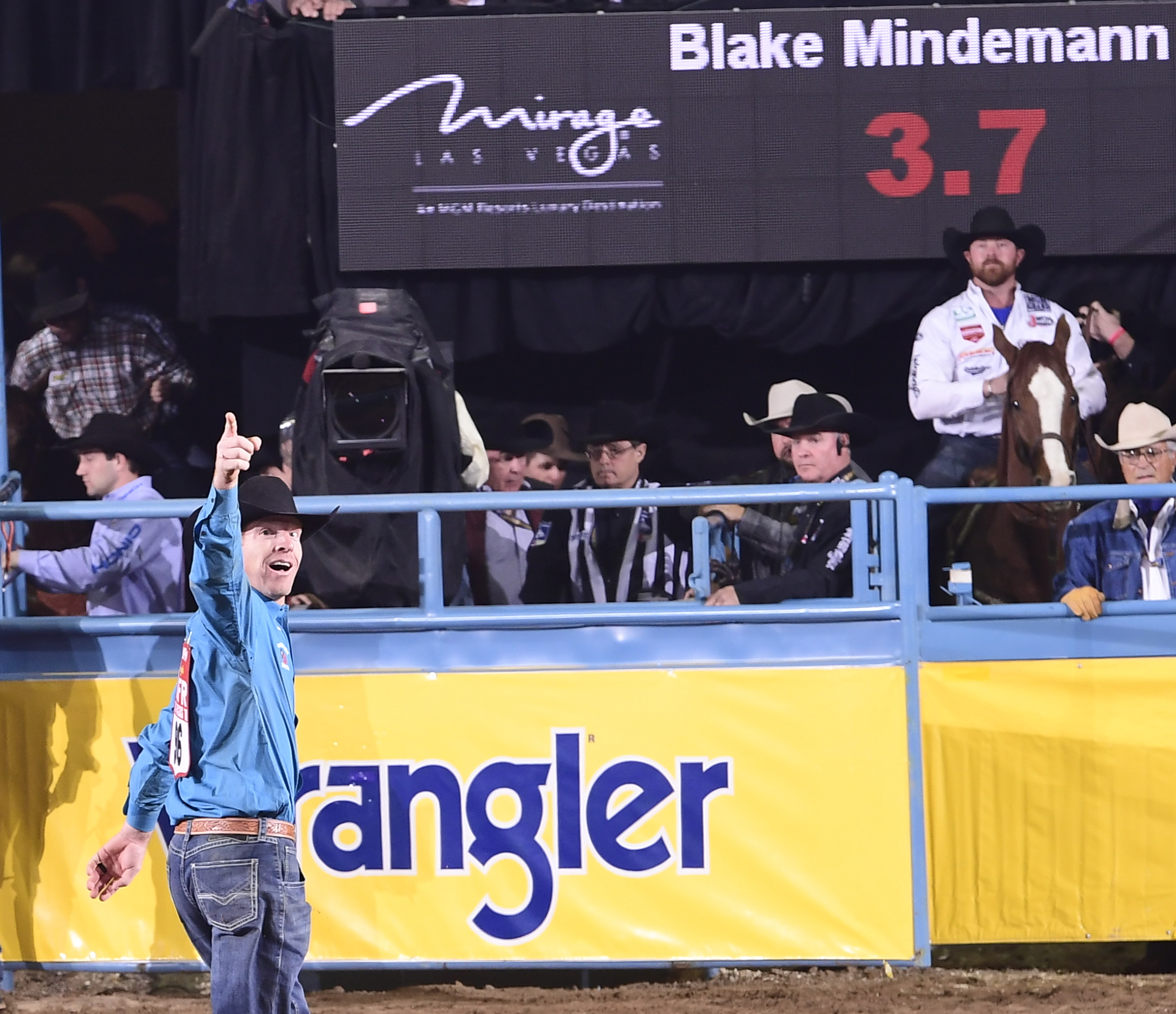 LAS VEGAS – Blake Mindemann believes in karma, and it paid off Friday night.

“I’ve had some ups and downs a little bit this week,” said Mindemann, a steer wrestler from Blanchard, Okla., competing at the National Finals Rodeo for the first time. “I thought we were rolling, and then we went back down. Last night we went all the way down to the bottom by hit the bucking chutes.”

As his horse veered left Thursday night, Mindemann hung onto the right side of Django as the gray gelding raced to the opposite end of the Thomas & Mack Arena. He hit a metal chute with his left shoulder and head. He was OK, though and returned to action on Friday.

“I had a good steer tonight, the one I wanted,” he said. “I actually called him. I thought I deserved him after last night.”

He took advantage of the steer and wrestled the animal to the ground in 3.7 seconds to finish as the runner-up in the ninth round. That was worth $20,731 and pushed his NFR paycheck to just shy of $50,000.

“I need every penny of it,” he said with a laugh. Mindemann has earned $127,650 this season. He has one more night to earn as much cash as possible.

“Django was a little bit off last night. He’s been good, but I didn’t break like I needed to, and he just didn’t feel very good. I just stuck with him because he has been good all week, and he worked well tonight and felt good. He fired. I feel like I rode better and got a better start.”

The NFR is a tricky place to play the game. The atmosphere is absolutely electric, and the arena is set up in the dimensions of a hockey rink. That’s considerably different than most of the rodeos cowboys go to throughout the regular season.

It was just the third payday he has received since he arrived. He earned money in the second and fourth rounds, but also has two no-times. He hasn’t allowed himself to get discouraged, though, because the opportunities are too great.

Now the next day is the final day of the 2018 season. He has one thing on his mind, and that’s hoping he draws the best steer in the pen.

“No. 41 is the one I want,” he said of Saturday’s herd of steers from which each cowboy will be matched by random draw. “I just need to hit the barrier, ride good and bulldog good. It’ll all pay off. It’ll all work out.

“You have to be on your game, because everyone else here is.”