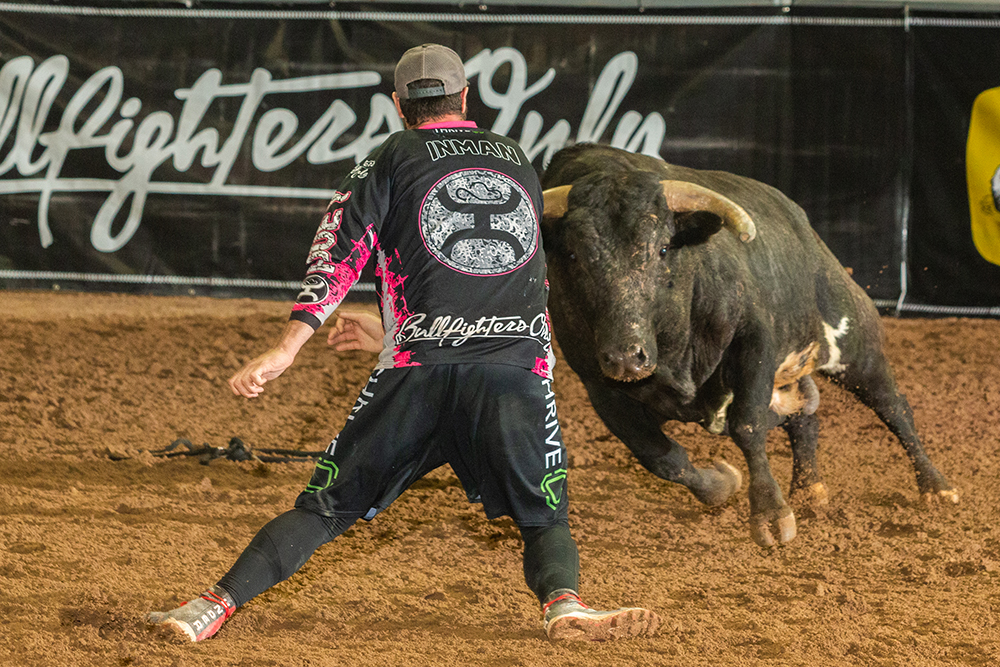 SCOTTSDALE, Ariz. – When Toby Inman looked to his right, he saw a young man half his age.

Inman is a veteran freestyle bullfighter, and Chance Moorman is less than a year into his career. Both were in the mix for the championship during the Bullfighters Only Barrett-Jackson Invitational this past weekend at Barrett-Jackson’s famed Scottsdale Auction.

“I joked around with him that he wasn’t supposed to be this good already,” Inman said of Moorman, just 18 years old from Lytle, Texas. “But he is, and he just goes out there and does it. It’s a good thing, and it shows it’s not just the veterans stepping up and doing some tricks.”

That’s true, but the veteran Inman walked away from Scottsdale with the victory and the $10,000 top prize to take the early lead in the 2019 Bullfighters Only Pendleton Whisky World Standings. He finished with a three-fight cumulative score of 259 points, just half a point better than Moorman.

“I was actually thinking about taking January off when I found out about this event,” said Inman of Davis Junction, I’ll. “Coming off Vegas, I was sore and out of shape.

“But this is a good start. Last year, I got a good start, then I had injury after injury. It’s actually hard to get in shape when things are going like that.”

The Barrett-Jackson Invitational is new on the schedule, but it was a true showcase event. While Inman and Moorman took the top two spots, they were followed by three cagey veterans: Kris Furr, Ross Hill and three-time reigning world champion Weston Rutkowski.

Though he got the silver medal, Moorman may have been the biggest showman of the bunch. He won the second round with a 90.5-point bout, the highest of the three-round competition. He started it by landing a perfect front flip over the bull, clearing the animal from head to tail.

“That second round was probably the best day of my life,” Moorman said. “I’ve been close before, but I’ve never been able to break that 90-point barrier. I landed the cleanest front flip I’ve ever done. That was awesome.

“I fought to the best of my ability and did the best that I could.”

Maybe the highlight was when the three-time world champion took a light-hearted approach with Moorman’s father.

“Weston went up to my dad at the end of the event and told him that it’s too early in the year for me to be doing stuff like that,” Moorman said. “That’s a big confidence booster to me, to have my idol say something like that.”

By winning the title, Inman pocketed the biggest prize, Moorman earned $4,000, and Furr, a second-year pro from Hamptonville, N.C., scored $2,000. They are the top three in the Pendleton Whisky World Standings with one event under their belts.

“I need to stay consistent and put consistent fights on throughout the year,” Moorman said. “I want to keep doing what I’m doing and try to finish toward the top.”

Inman knows that feeling. He’s been one of the best freestyle bullfighters going for most of his career. In 2018, he led the BFO standings much of the season before injury caused him to fall behind and finish third overall.

Of course, kicking off the season with a big win in Scottsdale was just what the doctor ordered.

“I’m not a big car guy, but to see that auction in person was such an amazing thing,” he said. “I’m pretty sure we’ve got a ton of new fans. That was a cool event to be part of, and I’m glad we got to be there to see that and for them to see what we do.”

They not only saw some outstanding action from the veterans in the game, but they witnessed just what the rising stars can do, too.

“Chance is doing things that’s going to make everybody step up, and so are the others,” Inman said. “We have to have the new guys that can do that and keep it intense. That’s better overall for the sport.”