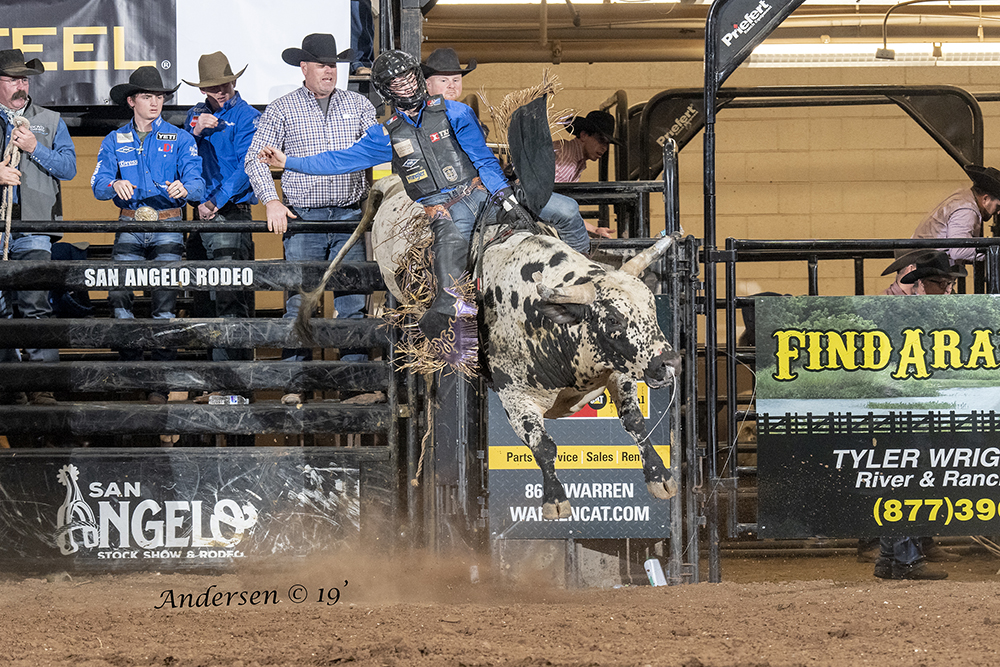 SAN ANGELO, Texas – The state of Utah was well represented Friday night during the fifth performance of the San Angelo Stock Show and Rodeo.

The big ride came late in the show, when 19-year-old Stetson Wright matched moves with United Pro Rodeo’s Happy Days for 89 points to tie for the bull riding lead with Aaron Williams, who rode last weekend. Both men are virtual locks to make the championship round, which takes place next Friday, Feb. 15, at Foster Communications Coliseum.

“All they told me about my bull was that he was mean,” said Wright, the third son of two-time world champion saddle bronc rider Cody Wright. “He felt great. He hipped himself, and after I got sat back down, he felt really good and turned into my hand.”

Oftentimes, animals leaving the chute will bang on the metal post, and that could foul the rider as he tries to make the moves necessary for high scores. Obviously, Wright recovered. But that’s nothing new for the family, which boasts of a host of top-rated saddle bronc riders. Cody Wright led the way, earning his first gold buckle in 2008, then following it in 2010.

Jesse Wright followed with the world title two years later, then Spencer Wright claimed gold in 2014. Along the way, that generation of Wrights includes Jesse’s twin, Jake, and brother-in-law CoBurn Bradshaw as National Finals Rodeo qualifiers. Since then, Cody’s sons, Rusty and Ryder, have played on the biggest stage in the game.

Stetson seems to be following suit, albeit in bull riding. He competes in saddle bronc riding – he was 76 points on Friday night and will not advance to next week’s short round in that event – but he loves the idea of riding both styles of roughstock events. Ryder Wright scored 84 points on United Pro Rodeo’s Red One and is third in bronc riding.

“It’s gone a little bit better in the bull riding, but I can’t complain about either,” said Stetson Wright of Beaver, Utah. “It’s important for me to compete in both.

“All of us starting out doing both events. They call me the stupid one, because they’re all smart enough to focus on bronc riding, and I’m still doing both.”

He made that comment in jest, but he’s making it work. He’s excited that he’ll be back in this west Texas community in a week to battle for the prestigious title. It’s the first time he’s competed in San Angelo.

“That was awesome, because that crowd was crazy,” Wright said. “There aren’t many rodeos that have fans as crazy as these guys.

“I’d say making the short round is really important. I didn’t have much confidence heading into tonight, because I’ve been struggling. Now I feel like I have all the confidence back. It takes one ride to boost your confidence and one ride to take it away.”

Caleb Bennett knows that well. Born in Ogden, Utah, he lived in the Beehive State all of his life until moving to Corvallis, Montana, recently. He’s ridden the big waves of success and the deep dives the sport can bring … all in a single season.

“It was awesome in a sense, being in that race and being in the position I was in – battling 1-2 with Tim – was something you always look forward to,” said Bennett, 31, a seven-time NFR qualifier. “I can look at the winter run I had last year and the way the year went clear up to the finals was what I’d dreamt of doing in my career.

“Looking back on it, you realize it wasn’t meant to be. For what ever reason, I wasn’t meant to capitalize. I was down about it for a little while, but now it just sends me in a different way to look at it. I look at all the ways I can improve so if I’m in that position again, I can capitalize.”

That’s the approach he had Friday. This won’t be his first time advancing to the short round at the stock show and rodeo.

“San Angelo is one of the bigger rodeos this time of year,” he said. “If you can have a heck of a winter run, you can set yourself up for the rest of the winter. To be able to capitalize on a good horse like I had tonight can set the year up.

“The crowd was awesome tonight. I was just taking that in. I stepped back as they were doing the opening, and that pace was packed. I’d say it was standing-room only, and it’s such a cool arena. That atmosphere and energy just runs through your veins and sends chills down your back.”

No wonder the best in the business look forward to competing in San Angelo each February.