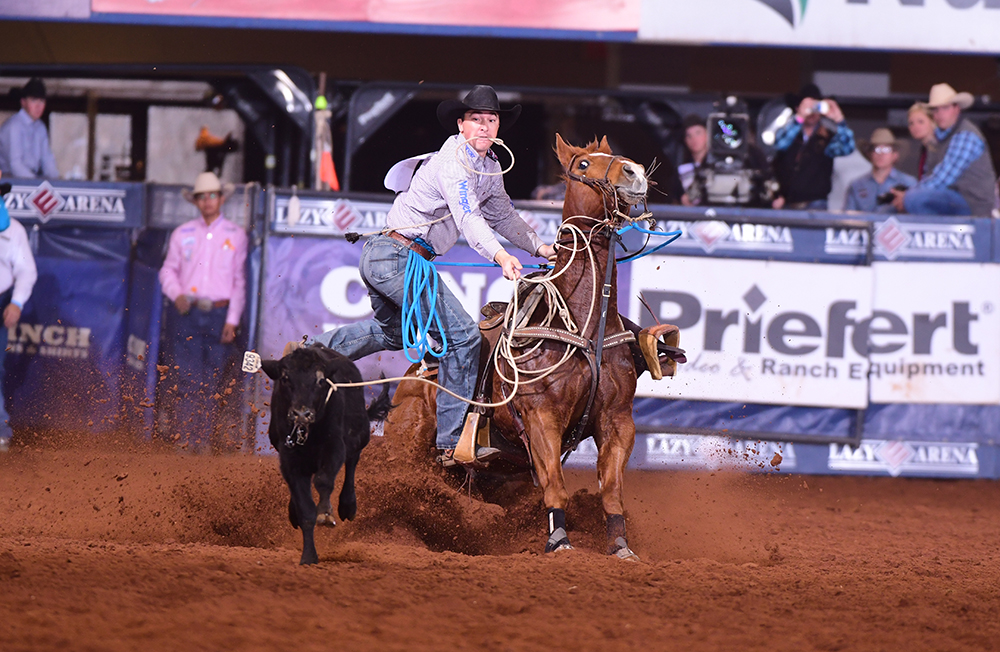 GUTHRIE, Okla – Jordan Ketscher has had the last year to reflect and remember the biggest win of his young career.

“Watching last year’s (CINCH) Timed Event Championship still gives me chills,” he said of viewing replays of his magical win. “Just to be in the arena with the top 20 timed-event cowboys is pretty unreal. To get that victory let me know that all the practices paid off and that it’s worked out. That means everything.”

Ketscher beat a talented field to stake the claim as the champion of the “Ironman of ProRodeo,” the most unique event in all of Western sports. He roped, wrestled and tied 25 animals in 324.3 seconds to become just the 14th man in the CTEC’s 35-year history to claim the prestigious gold buckle.

His task now is to defend that title, and he will get that chance during the five-round, three-day festival.

“I’ve got to practice and keep working at it,” said Ketscher, 29, of Squaw Valley, California. “I know if I’m not, somebody else is. It’s not an easy feat. I know everybody’s going to be on their A game, so I’ve got to be, too.”

The field of features six of the 14 past champions, including Ketscher, Jess Tierney, Paul David Teirney, Kyle Lockett, K.C. Jones and Trevor Brazile. It’s a true test of each cowboy’s skill, endurance and fortitude. It’s where steer wrestlers rope and ropers bulldog, and it happens over a rugged five-round competition held over just three days, March 8-10 at the Lazy E Arena.

Added to the event will be the marketplace and the CINCH Fan Zone. The marketplace will have fashion, tack, leather goods, farm and ranch equipment and more.

The CINCH Fan Zone will have autograph sessions daily beginning after the noon at 7:30 p.m. performances on Friday, March 8, and Saturday, March 9. It will also feature a bar, games, giveaways, a lounge area to watch each performance live, a photo booth and the CINCH Kids Dummy Roping presented by Smarty – kids can rope with the Jr. Ironman contestants before the Friday and Saturday evening performances.

The key ingredient, though, is what happens inside the arena.

“The reason I like it is you have to go there and do all five events,” Ketscher said. “It’s not like you can expect to do good in all five. You’ve got to work on your weaknesses. I’ve got to work on my steer roping and get a little better at it, because I know that’s where I’m going to lose a little time.

“You have to compete in events you’re not comfortable with and get through it. It’s exciting. It’s not like a rodeo, where you have to try to place in the top five or six. In each event, you have to make the best run you can and let the average take care of itself.”

While the top three in each round will pocket money, the big prizes come at the conclusion of the CTEC. The event champion with the best aggregate score through 25 runs will pocket $100,000. Ketscher earned $103,000 last March because he also won the third round.

“That money sure helps out, lets you get some horses paid for, buy some new horses and set yourself up for the upcoming years,” he said.

“It’s a combination of a physical and mental grind,” Ketscher said. “Because you run so many times, the physical part comes into play. You try not to, but the $100,000 is in the back of your mind, and that just wears on you mentally through the weekend. You can start off great, then have one thing take you down. You’ve just got to keep a level head through the whole thing.”

That’s easier said than done, which is why so few people have won the title since it first began in 1985. Whether it’s Brazile’s record of seven CTEC championships or Jones’ five titles, few people understand just how tough it is.

“I think the key to winning is being consistent and keeping that mental attitude strong throughout the whole thing, not letting one thing get you down too much,” Ketscher said. “You’ve just got to play it smart, reflecting back to where you’re making those good runs.”