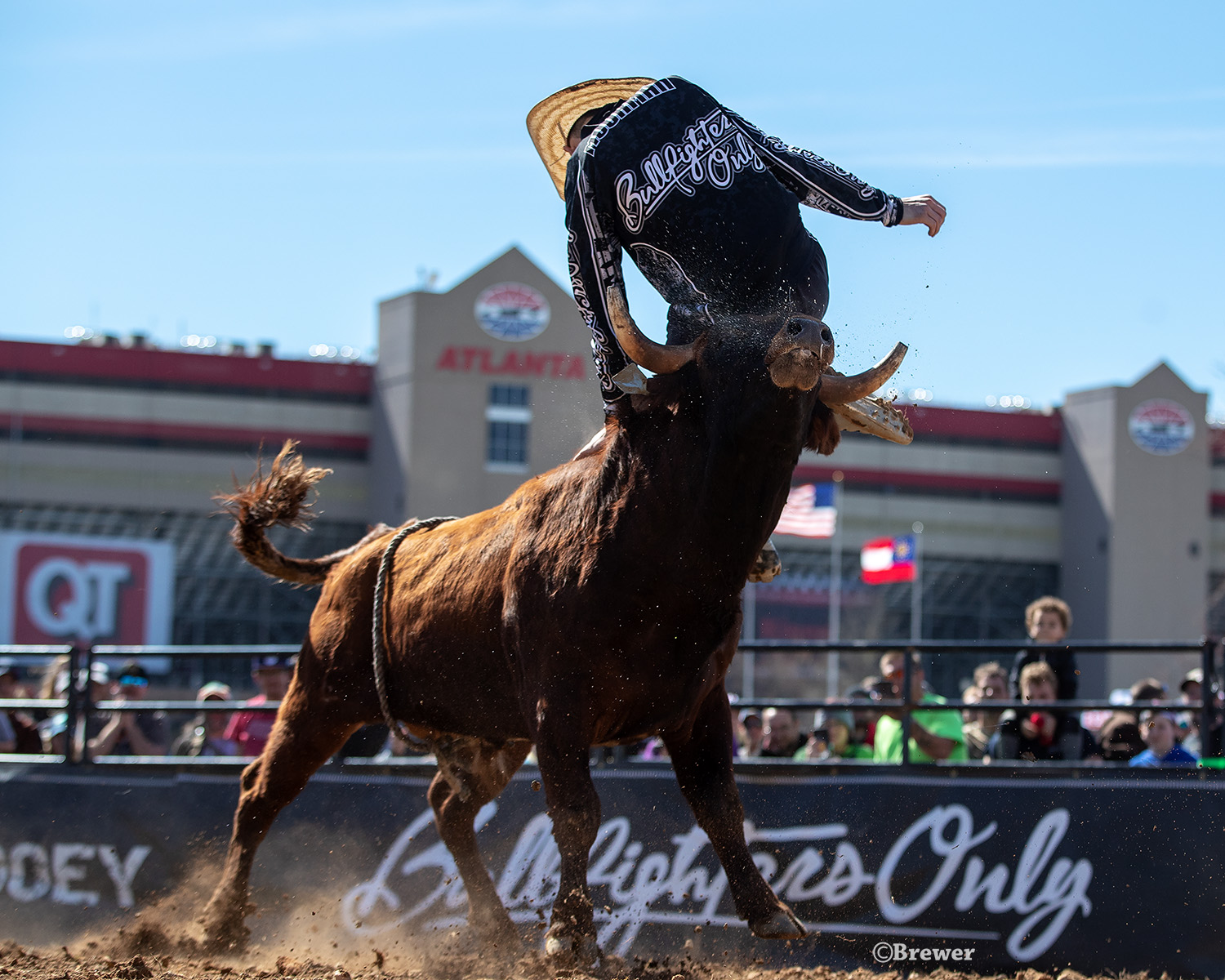 Between them, Weston Rutkowski and Chance Moorman made a combined $17,500 at Bullfighters Only events over the past weekend.

It was a busy week for the BFO, with the sport’s richest one-day bullfight taking place Saturday afternoon in conjunction with the San Antonio Stock Show and Rodeo; it was followed by the season’s first Speedway Series event less than a day later at Atlanta Motor Speedway in conjunction with the QuikTrip 500 NASCAR race. In all, more than $35,000 was paid off at the two major stops.

“You can’t put into words what it means to be in front of 17,000-plus fans in San Antonio,” said Rutkowski, who won the Wrangler Bullfight Tour stop and pocketed $12,500. “Now we’re packing out arenas like that, and the people know the BFO. It’s definitely surreal.”

That’s because he’s been a part of freestyle’s premier organization’s growth from the ground up. Not only is he the three-time world champion, he also is one of the original BFO pioneers; a group of 15 bullfighters who have fought exclusively for BFO over the last three years. Moorman, on the other hand, is just nine months removed from his high school graduation and first BFO Development Camp.

At 18, he’s definitely a rising star in the game and proved it in Atlanta, posting a 90-point fight in the championship round to win the title in dominant fashion.

“The bulls we had there were a ton of fun,” said Moorman, who earned $5,000 for his victory. “The key was just to stay calm and collected. I let the bull do what he does; try to kill me. But I kept going at him.”

He won his first-round bracket with an 87.5-point fight to advance to the finals, where he faced Rutkowski and Kris Furr of Hamptonville, North Carolina. That’s when he put together one of the strongest bullfights of the 2019 season, starting off with his signature move, a front flip over the bull from horns to tail.

“That was probably the loudest they got all day,” Moorman said of the crowd. “We had a lot of rain, and guys weren’t too sure of the footing but I just decided to do that trick right out of the gate.”

It paid off. He stayed smooth and in control of the red bull for the initial 40 second period, then added another jump to finish off the fight. Moorman’s 90-point score was the highest score of the entire weekend, and it’s his second 90-plus point fight in only three events.

“When you’re in a fight like that, it just feels like slow motion,” said Moorman of Lytle, Texas. “With that red bull, it just felt super slow. I could drape my hand over him as he just went by. It was great.”

Rutkowski, one of four men who competed at both events, has been impressed with what he’s seen in the teenager.

“Chance is dangerous,” he said. “He’s a young kid with a bright future ahead of him.  He’s got a lot of talent, and he reads bulls well. For a young guy, he’s very seasoned. To watch as a fan, he’s got the total package.

“He can jump out of the arena, and he’s going to be a contender for this season and a lot of years to come.”

Rutkowski knows a bit about the game. He is the three-time champion of the BFO, and his earnings over the weekend moved him to the No. 1 spot in the Pendleton Whisky World Standings. His win in the Alamo City was a key reason behind it.

“It’s pretty easy to get excited when you’re in the middle of AT&T Center,” said Rutkowski of Haskell, Texas. “The atmosphere in there is just incredible. All you have to do is feel that energy, and you’re going to get excited.

“The money that San Antonio puts up is second to none. It’s a testament to what the BFO has done for freestyle bullfighters like myself.”

He was joined in the field at both events by Furr, Colt Oder and Tucker Lane, and they all boarded the same flight on Saturday evening to make sure they arrived together in Atlanta. Furr placed second in both states.

“The beautiful thing about the BFO is you’re up against the best guys in the world,” Rutkowski said. “You’ve got guys like Kris Furr there, so you know if you stub your toe, they’re going to beat you.”