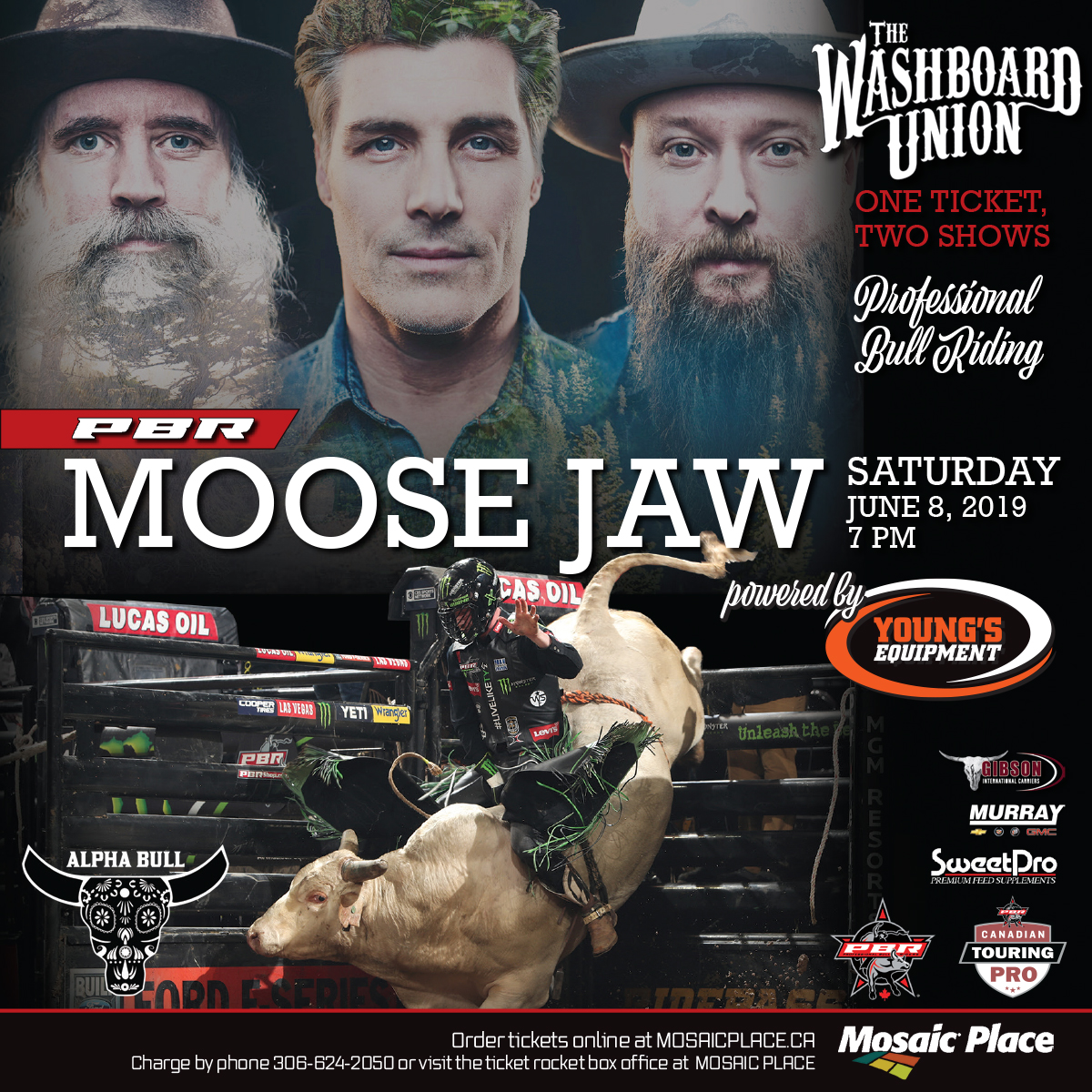 Saskatchewan cowboys Byrne, Roy to be featured The Washboard Union

MOOSE JAW, Saskatchewan – The entertainment value heading to Mosaic Place in June is about to increase.

The Professional Bull Riders Moose Jaw Powered by Young’s Equipment will take place 7 p.m. Saturday, June 8, at the arena and will not only feature the top bull riders in Canada and a concert by The Washboard Union, the Canadian Country Music Group of the Year Juno Awards nominee.

“Alpha Bull is like no other show we have ever been part of,” the band said in a statement. “Bull riding, explosions, lights and topped with The Washboard Union live together under one roof. It ought to be illegal.”

It’s quite legal, and it’s the perfect setting as the province rolls into warmer summer nights. Now in its sixth year, the PBR Moose Jaw has become a must-see event in Saskatchewan.

“It’s one of those events that guys look forward to throughout the year,” said Tanner Byrne, the 38th-ranked bull rider in the PBR from Prince Albert, Saskatchewan. “Chad (Besplug of Alpha Bull) puts on totally different events than other bull ridings, and it gets guys fired up. It’s more of a rock ‘n’ roll concert show.

“I know it’s going to be cool to ride in that one, knowing how much effort he puts into the production.”

That’s the Alpha Bull calling card. As a former bull rider, Besplug brings that experience to the table during the production. He wants the cowboys to enjoy it as much as the fans.

“Moose Jaw is a hometown crowd for me,” said Aaron Roy of Yellow Grass, Saskatchewan, who has been part of the PBR’s premier tour and now sits No. 6 in the PBR Canada standings. “They always have an amateur event there. Now with Alpha Bull, you have the band there, too, you get two highly entertaining shows.

“It’s an all-star package. You’ll get to watch all that and top it off with good music.”

The PBR was established 27 years ago and has grown exponentially over that time. What started out as the top 20 bull riders in rodeo has developed into a world-wide event, with contestants coming from a variety of countries. The various tours are so big, many contestants can focus on PBR events to gain points.

The ultimate is the premier tour, now called the Unleash the Beast Tour. The goal for each of the cowboys is to earn the points to play for the biggest pay in the game. Both the Saskatchewan bull riders have been there. While Byrne is one of the ranked cowboys on the top tour, he’s still 15th in PBR Canada.

“The PBR in Canada has been growing immensely over the last couple years with the introduction of the Unleash the Beast Tour,” Byrne said. “There is a lot more money and incentive. You have a better chance to make it on tour by competing in Canada.

“Chad started the Alpha Bull events. The more events the better. You have a shot at more money, so you don’t have to travel down to the U.S. to get your name out there.”

That’s something Besplug understands, and it’s why he wants to help grow the sport in Canada.

“Chad has been around bull riding a long time,” Roy said. “He knows it and knows how to put on a show. He’s trying to make it feel like it’s action all the time. He’s getting more events, and people are going to more of his events because they like how he puts them on.”

It also helps that Moose Jaw is so close to home for both Saskatchewan cowboys. They know they have a chance to earn some good money, compete at a high-energy event and be able to improve their status in the PBR.

“When Chad started doing these events, it gave us a new avenue to go to, and it made everybody else try to step up and produce more events and do more for us riders to get us to come,” Byrne said. “It’s cool to see. Moose Jaw is just three hours from my house. It’s a world-class event I don’t have to fly to, and I get to ride in front of my home-province fans.”