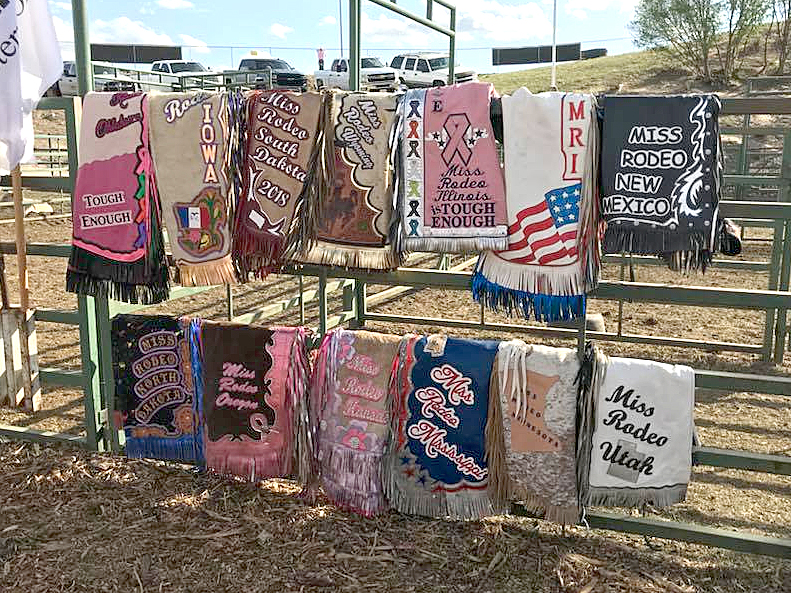 GUYMON, Okla. – Having raised four boys, Sherry Stonecipher looks for a change of pace every May during the Guymon Pioneer Days Rodeo.

That’s when she and her husband, Ken – a longtime member of the rodeo committee – host most, if not all, the visiting queens that are in town for the festivities. For most years, they are just one of several families to host the girls. In 2017 and ’18, all the ladies stayed at the Stonecipher residence.

“For me, I get to mother girls, and it’s a different experience,” she said. “It’s like a big girls’ weekend. I get to watch girl movies. I get to have girl chit-chat. I get to talk about girl stuff instead of guy stuff. It’s like a big slumber party.”

Two years ago, there were 17 queens in Texas County for the goings-on. They all packed hat boxes, clothes, boots, makeup and other necessities needed during their stay and crammed them into the home on the north side of town.

“That was probably one of my best memories during my year as Miss Rodeo Oklahoma,” said Taylor Spears, the 2017 Miss Pioneer Days Rodeo and 2018 Miss Rodeo Oklahoma. “Sherry was just gleaming when all the girls moved stuff in. You’d think people would be upset, but she wasn’t. She told us, ‘You girls are the daughters I always dreamed of having that I never got to have.’

“It was so fund to spend the week with her.”

That’s what many of the visiting queens say, whether they’re from Oklahoma or Idaho. They find out that rodeo royalty is a big part of the Pioneer Days Rodeo experience.

“I know lots of places that don’t have the queens, but we’ve built it up in Guymon,” said Becky Robinson, who has overseen the queen program for the rodeo committee since 2008. “I line up places for them to stay and line up sponsors to feed them. We don’t want them out a lot of money, so I have everything sponsored. They spend a lot of money to get here.”

It’s become a passion for Robinson, and she shares it with her family. In fact, she and her sister, Gina Horner, take their mother to Las Vegas so they can experience the Miss Rodeo America pageant during the National Finals Rodeo each December.

“I just enjoy working with the girls,” Robinson said. “They’re all really good ambassadors, and I’ve stayed friends with them. I still have girls from way back contact me. It’s just part of the rodeo family.”

Because of the sport’s gypsy lifestyle, contestants, queens and personnel can be away from home for several weeks – even months – at a time. They depend on their rodeo family, and the feelings are felt across the industry. The caravan hits the Oklahoma Panhandle over the first weekend in May.

“Rodeo is not just an athletic competition; it’s a sport that has pageantry and tradition, and rodeo queens bring all that to the arena,” Ken Stonecipher said. “Not only do they bring beauty to the arena, but they also bring horsemanship, rodeo knowledge and the ability to interact with the fans.

“I couldn’t imagine having a rodeo without them.”

Many in Texas County agree. Businesses support the queens while they’re in town, primarily because they believe in the importance of the rodeo and also of what it takes to promote the sport. Queens not only display flags in the arena and share their love of horses, but they make their way around town for days leading up to the rodeo performances, spouting words of encouragement while also serving as ambassadors to the game.

A few years ago, 24 queens made their way to Guymon, the most Robinson has ever had. There has been at least a dozen most years. For this year, Robinson said, 10 are committed so far.

“But I could have 17, 18 or 19 before I know it,” she said with a laugh. “Word spreads pretty quickly, then we’ll start getting more and more before long.”

It’s quite a statement that the young ladies want to be part of Pioneer Days Rodeo.

“Until the queens come to Guymon, the truly don’t know what to expect,” Spears said. “I overheard Miss Rodeo Idaho say she had heard about Guymon.

“I grew up admiring the caliber of cowboys that get to compete at the Guymon Pioneer Days Rodeo. To be the Guymon queen and represent Guymon for the year I did goes beyond my wants and desires. It’s a phenomenal opportunity to represent something bigger than myself. It was so awesome going to schools where they speak 23 different languages and interact with the students. It made me proud that I get to represent this group of people.”

“The reason we do this is to support the rodeo,” Sherry Stonecipher said. “We know bringing the queens is an element that adds to the rodeo experience.”

The Stoneciphers have noticed the bond that develops between the women who share their home during those few days each spring. While Ken Stonecipher spends most of the week at the rodeo grounds, he has been able to share in the experiences on a limited basis.

“When they travel, these state queens rarely get to stay with each other,” he said. “By staying in one place, they all form great friendships with each other. They really like all being in the same spot It gives them an opportunity to hang out and build on those relationships with the other state queens that they see at events all year.

“They have very busy schedules at the rodeos. Staying together in Guymon gives them the chance to spend their downtime with each other, which doesn’t happen often, and they appreciate it. My wife always wanted a daughter, so she gets a dozen plus there for a week. I think she enjoys having a little female presence in the house for a change.”