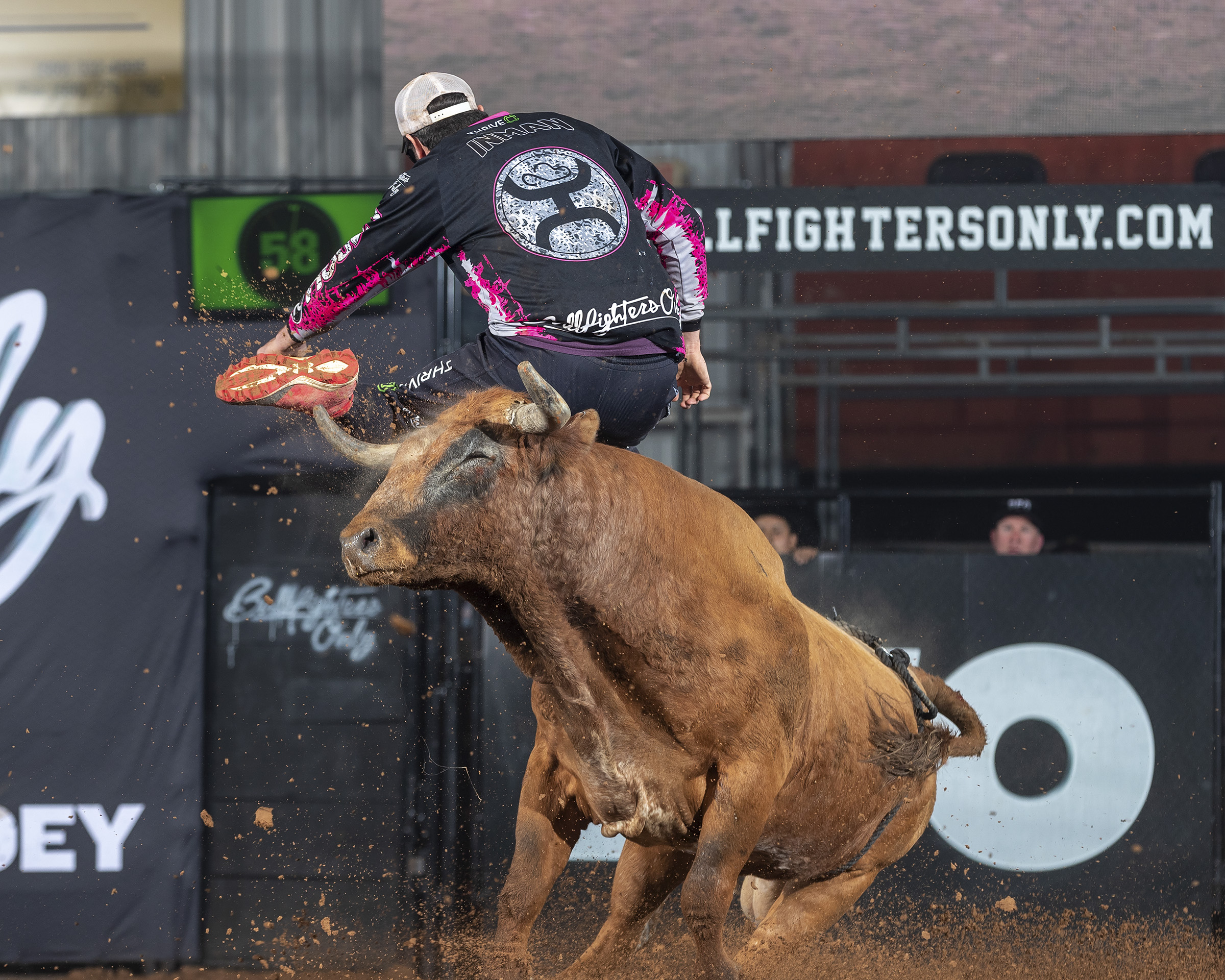 Bullfighting veteran moves to No. 1 after victory at the BFO Ada Invitational

ADA, Okla. – Toby Inman is well aware of the danger that comes with freestyle bullfighting.

He loves it nonetheless. Over this past weekend, Inman proved his old-school methods of combating ferocious, Spanish fighting bulls still works. For the second straight year, he earned the championship at the Bullfighters Only Ada Invitational at the Pontotoc County Agri-Plex.

“There’s a lot of history with bullfighting in Ada,” said Inman, 36, of Davis Junction, Illinois. “Ada’s old school. That fits me pretty well.”

He put together two solid bullfights on Saturday night. In his first-round match, he outlasted two young guns, Chance Moorman and Trenton Ross, to advance to the Hooey Championship Round. That’s when he put on a show that only Inman can, starting off with a jump, then making rounds and utilizing back fakes to keep the bull just a half step away.

“It’s nice to be in good enough shape that you can do it, and I think that had a little bit to do with it,” said Inman, who pocketed $12,000 for the victory and moved to No. 1 in the Pendleton Whisky World Standings. “You never really know the key to success because that key doesn’t always repeat itself.”

Nonetheless, he posted an event-high 87-point bout to win the championship, fending off Tucker Lane, Colt Oder and Seth Wilson along with veteran and BFO Pioneer Beau Schueth. Also for the second straight year, Oder finished second at the Ada Invitational. Only Inman, Oder and Lane finished their bouts; neither Schueth nor Wilson was able to last.

That’s just proof of the test the bullfighters put themselves through while competing for unprecedented money in the BFO.

“The bulls are always going to be tough in the short round of a BFO event,” Inman said. “Some guys are able to handle them, and sometimes you just get caught. I’ve been there. You can have it won in the first 15 seconds, then the bull catches you and you’re done.

“You have to treat every bull like a new bull. I try to have that mentality all the time.”

Wilson first stepped into the BFO arena 16 months ago at the Las Vegas Championship after a strong showing at BFO’s first Development Camp. He was 17 years old and earned big points while testing his talents alongside the greatest bullfighters in the game.

Now 19, he returned to the BFO in Ada as one of 15 men who competed Friday night in the Qualifier Round. The event featured five three-man bullfights, with the round winners advancing to Saturday night. Wilson was one of the five to advance to the championship.

“That definitely made me feel good,” said Wilson of Jackson Hole, Wyoming. “Ever since my first Vegas event, I haven’t made it out of a Qualifier Round. To get that out of the way was great.

“Winning my round on Saturday was a big confidence-booster. I’ve been going through the events knowing that I can, but it hasn’t worked out. To finally put some bullfights together and show that I can do it helped me out a bunch. That helped me keep my head on straight.”

The weekend prior, he suffered a leg injury. Though he had done well on his first two bulls in Ada, the leg took another shot.

“It was a little sore, then in the short round, I didn’t get out of the way on one of my fakes, and he caught me and hit that leg again,” he said. “It makes me want to kick myself for not being able to finish, but at the same time, I would’ve just gotten hooked and maybe hurt worse if I’d tried to keep going.”

Still, he proved a point to himself and his fellow bullfighters. He was a winner two of the three times he entered the ring, and he’s already looking forward to his next opportunity with the BFO.

“I think it’s a blessing, everything the BFO can do for a guy,” Wilson said. “It’s an incredible way to get your name out. They show who you are as a bullfighter, and the opportunities they can lead you to are almost endless. The BFO is pretty incredible.”