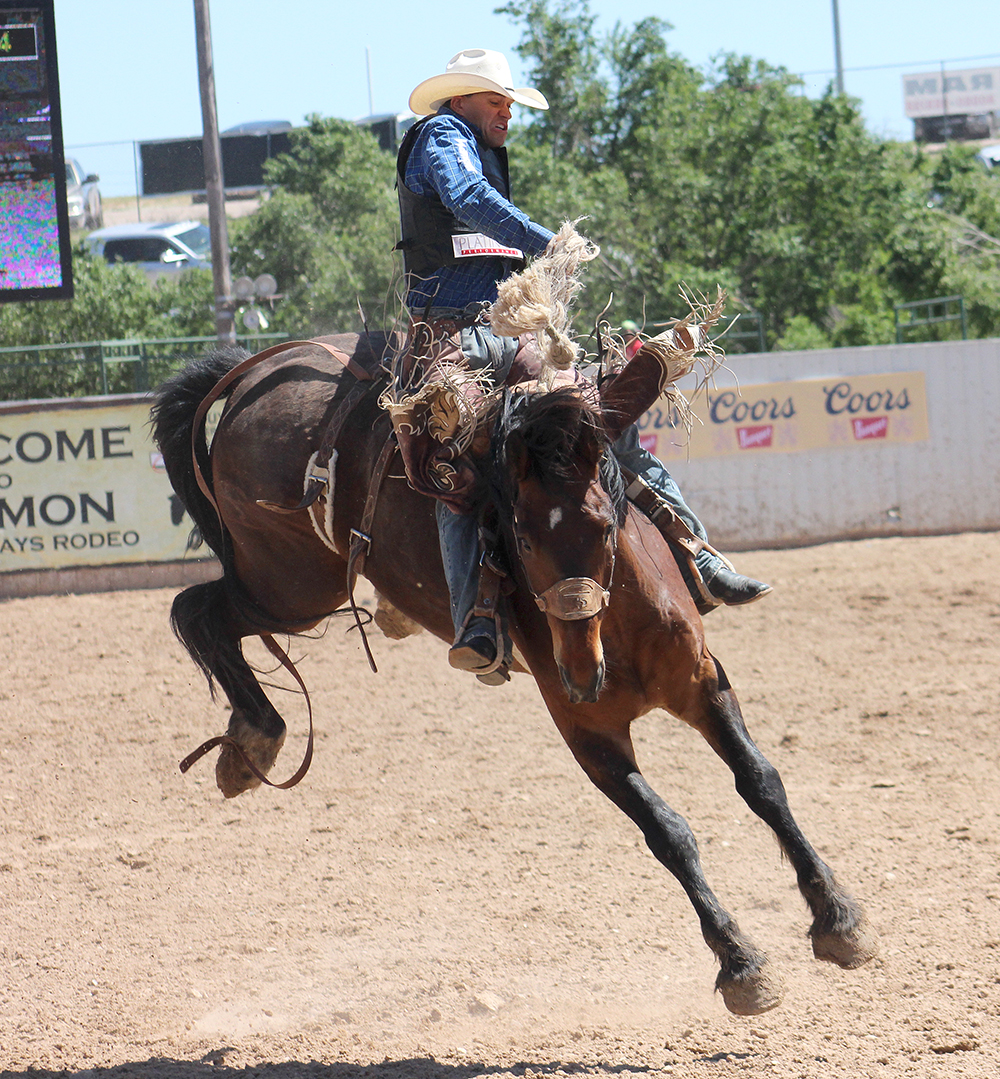 GUYMON, Okla. – While Pioneer Days is the annual celebration in this community of nearly 12,000 people, the rodeo that’s associated with it is the jubilee’s marquee event.

Not only is it a throwback to the community’s Western legacy, but also it is a display of the incredible athletes in the sport and a true showcase of Americana all wrapped into a week of competition, with four performances set for 7:30 p.m. Friday, May 3; 2 and 7:30 p.m. Saturday, May 4; and 2 p.m. Sunday, May 5, at Henry C. Hitch Pioneer Arena.

“Our rodeo is an important part of Guymon’s history,” said Mitch Egger, chairman of the volunteer committee that produces the event. “This is our 87th year, and our committee works very hard to live up to the responsibilities of that legacy.

“This is the biggest event in Texas County, Oklahoma, every year, with nearly 800 contestants making their way to Guymon for the rodeo. Not only that, but we draw fans from beyond the Panhandle to see what we have to offer. This is really a great way to showcase our community.”

The contestants agree, which is why they come from all over the country to be part of the festivities.

“Not only is Guymon in the (Prairie) Circuit, but it’s probably the best circuit rodeo we have,” said team roping-header Coleman Proctor, a four-time National Finals Rodeo qualifier from Pryor, Oklahoma. “There’s a lot of heritage out there, and Guymon’s always been fun. I bought my permit so that I could compete at Guymon, and I always look forward to it.”

Team roping is one of a couple of specialized events at Pioneer Days. It is one of the few, if not the only, rodeos across the country in which the cowboys rope hornless cattle, known as muleys. It adds a much different flavor to the event and has helped make the Guymon event popular with team ropers.

“We get walking-fresh muleys,” Proctor said, referring to the fact all the cattle will enter an arena for the first time ever, coming straight out of a pasture in the Oklahoma Panhandle. “It’s always fun to go somewhere like that where the set up is different.

“They have a hand-pulled barrier, which is different than most other rodeos. It wouldn’t be Pioneer Days without having us rope muleys. Ever since I was a kid, you always heard about Guymon because of that.”

But that’s not all. Because Texas County is recognized as the Bronc Riding Capital of the World – there have been six men with ties to the Oklahoma Panhandle that have earned saddle bronc riding world championships – it is another specialized event for the fans in Guymon. In addition, there have been dozens of bronc riding NFR qualifiers with ties to the region, especially those who have attended Oklahoma Panhandle State University.

“To me, it’s a real prestigious rodeo,” said Isaac Diaz, a six-time NFR qualifier from Desdemona, Texas, who sits in the Top 10 in the world standings. “It kicks off the summer, and there’s always good stock. I think most guys enter it because it’s fun. With the Etbauers and Craig Latham being from there, it really feels like a bronc riders rodeo to me.”

That feeling may just grow this year with the introduction of the new primary livestock producer, Frontier Rodeo, the reigning four-time PRCA Stock Contractor of the Year based in Freedom, Oklahoma. In addition to that accolade, Frontier features seven animals that have been named horses of the year, including saddle broncs Maple Leaf and Medicine Woman, the latter of which has earned it four times.

“Having Frontier there will be great,” said Diaz, who recently won the rodeo in Logandale, Nevada. “They have a ton of great horses. It’s going to be a good fit for Guymon.”

Over the years, Pioneer Days Rodeo has been recognized as one of the best in the sport. It was inducted into the ProRodeo Hall of Fame in 2015 and has been a major stop for contestants for years. Its popularity burst onto the scene in the late 1990s, when it was part of the televised ProRodeo Tour. That changed in 2005, when the PRCA was undergoing some financial struggles.

This year marks the Guymon rodeo’s return to the tour, which will be broadcast live on ProRodeoTV.com.

“This is going to give Guymon and the Oklahoma Panhandle some great exposure, and it’s going to allow rodeo fans from all over the opportunity to see what we’re all about,” Egger said. “We’re excited about the changes that are going on with our rodeo and within our community. This is a big event for us all.”

The volunteer committee that organizes the annual event understands that, but so do those who support it financially. The committee will host a sponsor/contestant dinner Monday, April 29, in the hospitality building at Hitch Arena as a way to thank the sponsors who have helped make the Pioneer Days Rodeo such a success in years past and years to come.

“Our sponsorship dollars are at an all-time high, which shows how much our community values this rodeo,” Egger said. “None of this would be possible without those sponsors and our great volunteers.”