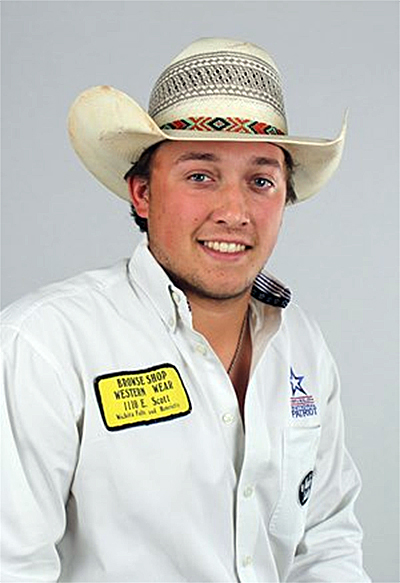 ALVA, Okla. – In just a few days, Colton Brown will walk across the stage and receive his degree from Northwestern Oklahoma State University.

He’s a cowboy, first and forever, but he has big dreams beyond his graduation day in Alva. He plans to attend law school, preferably Texas Tech University. But his cowboy instincts came through this past weekend by finishing his final season strong at the Oklahoma Panhandle State University’s Doc Gardner Memorial Rodeo in Guymon, Oklahoma.

“It means the world to me to do that,” said Brown, a senior from Nocona, Texas. “I definitely couldn’t ask for a better way to end my college career.”

Brown’s best finish came in steer wrestling, where he placed third in the first round and finished second overall to teammate Colt Madison of Whiting, Iowa. But Brown also placed in both rounds and finished fourth in tie-down roping, proving to himself that he can be successful in multiple events.

“I think the key in Guymon was my horses,” said Brown, who transferred from South Plains College in Levelland, Texas, after his sophomore year. “I’ve had my calf roping horse my whole college career. I love him because he just gives me the same run every time. He never fails to work.”

Dinero is a 15-year-old sorrel gelding, but he’s not the only horse the Texan trusts. He also has Dixie, a 16-year-old buckskin mare that he’s ridden for most of the last decade.

Brown was raised on a ranch in north Texas, the sixth generation of his family on the place. His father competed in professional rodeo for more than 20 years, so it was an easy transition for the youngster to find his way into the arena.

“I’ve grown up doing it,” he said. “One of my dreams was to rodeo, to try to follow my father. Our ranch has been in our name for 145 years now.”

After competing two years in west Texas, Brown decided on Northwestern because of the coach, Stockton Graves, a Ranger alumnus who qualified for the National Finals Rodeo seven times in steer wrestling.

“Stockton’s such a great coach, and more than anything, I wanted him to help my bulldogging,” Brown said. “There was really nowhere left in the Southwest Region that catered to bulldoggers, and everyone said that if you want to be a steer wrestler, Alva was the place to go. It’s the best opportunity for bulldoggers is to go to Northwestern and have them make a champion out of you.”

While there’s been great success in steer wrestling, Graves and Northwestern have proven to be a proving ground for any contestant wanting to mature through college rodeo. In fact, five contestants finished the 2018-19 Central Plains Region atop the standings and earned their spot at the College National Finals Rodeo in June.

Tie-down roper Riley Wakefield of O’Neill, Nebraska; steer wrestler Bridger Anderson of Carrington, North Dakota; and breakaway roper Taylor Munsell of Arnett, Oklahoma, won regional titles in their respective events. They will be joined in Casper, Wyoming, by heeler Tanner Nall of Colcord, Oklahoma, who finished second in the region, and Bradley Ralph of Wann, Oklahoma, who placed third in steer wrestling.

Junior header Daniel Durkes led the way for the Rangers while in the Oklahoma Panhandle, winning the team roping title with his heeling partner, Zeke Hall of Fort Hays (Kansas) State University. Wakefield placed in the first round and finished sixth overall as a heeler. Though he didn’t place in the first round, tie-down roper Levi Walter of Wray, Colorado, finished third in the championship round and in the average.

Barrel racer Amber Scales of Pittsburg, Kansas, led the way for the Rangers women, placing in both rounds and finishing second overall. Senior Ashlyn Moeder of Oakley, Kansas, closed out her college career by finishing fourth in the short round and fifth in the average.

Breakaway roper Makayla Mack of Christmas, Florida, raced to a 2.1-second run to win the first round. Even though she was saddled with a no-time in the short round, she still finished sixth overall.

“One of the things Stockton has taught us is to never give up,” Brown said. “He really focuses on the mental part of the game. You can’t let the last rodeo or the last run affect what’s going to happen. The last one is over and done, so it’s time to look forward to the next one.”

Brown’s college rodeo career may be complete, but he hopes to still chase his rodeo dreams at the professional level while completing law school and beyond.

He’s a cowboy, after all.