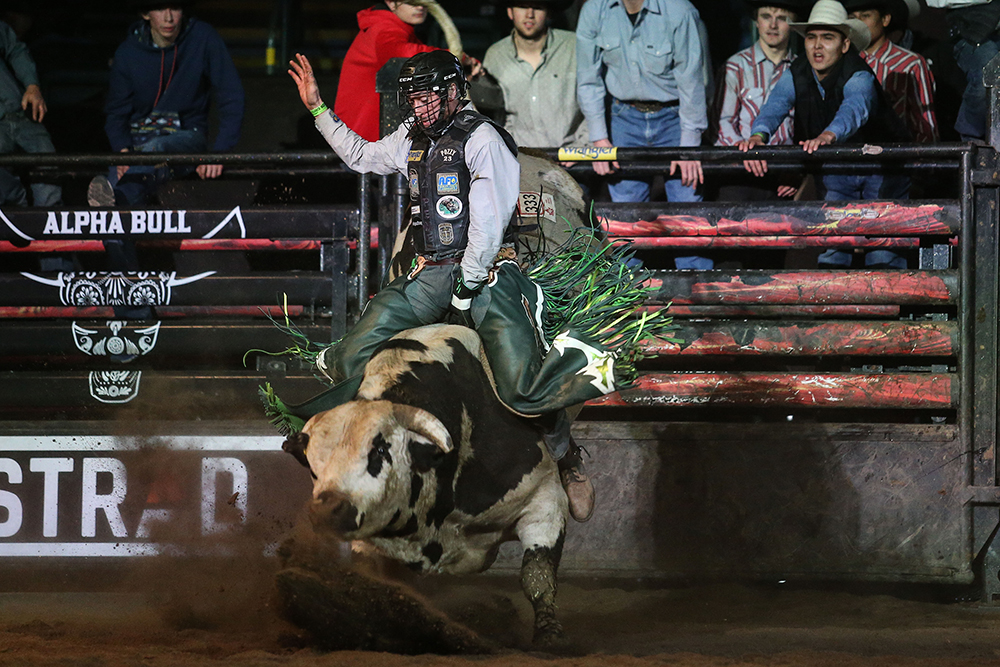 Six months ago, he flew into British Columbia to compete for the first time at the PBR Dawson Creek Fueled by Lyons Production Services, and he left with the victory. He plans to defend his title at this year’s event, set for Nov. 30 at the Encana Centre.

“That was my first Alpha Bull event, riding in a spotlight in the dark,” said Hansen, 25, of Okotoks, Alberta. “I was coming off another win in Regina (Saskatchewan), and I was feeling good. It was a slow time of year for me – I wanted to be in Vegas (for the National Finals Rodeo), but it worked out for me to be in Dawson Creek instead.

“I drew a couple of really good bulls and was lucky enough to stay on both of them and get the win. That was my first event of the season for 2019 for the PBR, and it couldn’t have gone any better for me confidence-wise, money-wise and points. That was the perfect thing I needed to get the year rolling.”

He’s stayed on that roll. As of June 3, Hansen is No. 3 in the PBR Canada standings. He’d like to be higher in the PBR and PRCA world standings, so he plans to hit the road hard over the coming months to try to make it happen.

“It’s been a good year,” he said. “My traveling partner, Jared (Parsonage), and I have been going back and forth in the PBR Canada standings. It’s pretty cool going head to head with him. We want ourselves to win, but I’m definitely cheering for him when he’s riding.”

In fact, they finished first and second in Dawson Creek last year. The cowboys learned quite a bit about the show inside the Encana Centre and what to expect when they return.

“The town is so supportive of rodeo and bull riding,” Hansen said. “They get a lot of people in that building. It’s a great event that Alpha Bull puts on with a live band, a lot of top bull riders and a great pen of bulls.”

Alpha Bull is owned and operated by Chad Besplug, a renowned Canadian bull rider who has transitioned from competing to producing some of the biggest shows in the country.

“I’ve known Chad for a long time, and he’s one of my favorites,” Hansen said. “He has a different grasp for production from a lot of guys. He’s going to turn the lights off, run a spotlight on the rides and have a live band after. It’s totally different, and that’s what makes it cool.

“I think the fans really like it because the spotlight draws their eyes to the action in the arena. I think this year’s event in Dawson Creek is going to be very similar to last year’s, but just a little bit better. I think everyone who went last year will come back, and they’ll bring a couple people with them.”

It’s that kind of show.