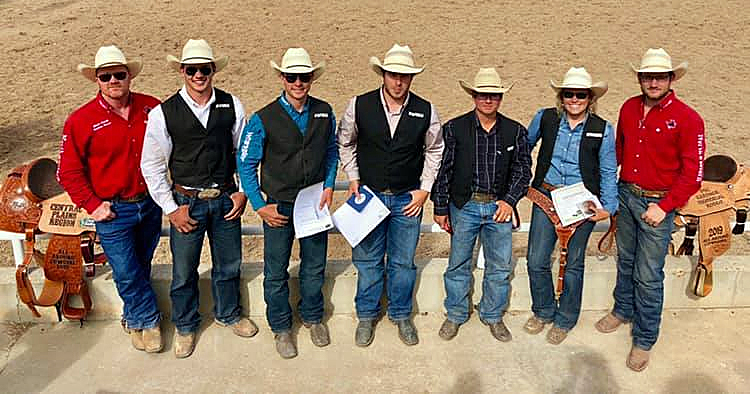 ALVA, Okla. – For intercollegiate rodeo contestants, the ultimate goal each year is the College National Finals Rodeo, home of the sport’s elite.

For five Northwestern Oklahoma State University athletes, the culmination of their year of hard work will come to fruition this next week in Casper, Wyoming, where qualifiers from around the country will embark on their missions to leave town with the coveted titles.

“I’m looking forward to a national title,” said Taylor Munsell, a senior from Arnett, Oklahoma, who won the breakaway roping title in the Central Plains Region to stamp her place in the college finals, set for Sunday, June 9-Saturday, June 15, at the Casper Events Center. “That’s the goal. I want to get there and make the best runs I can on the animals I draw and put it together.”

Munsell is the lone cowgirl on the Rangers team that will make the trip north, joining heeler Tanner Nall, tie-down roper Riley Wakefield and steer wrestlers Bridger Anderson and Bradley Ralph with dreams of leaving Wyoming with champions’ buckles.

Each has earned their spot in the finale by finishing among the top three in their events in the Central Plains Region. Wakefield and Anderson won the regional titles in their respective disciplines, while Nall finished second in heeling and Ralph third in bulldogging.

“Winning the region title this year was a big accomplishment,” Munsell said. “I had a good chance to do it last year, so I came back with a vengeance this year to get it done. I’m blessed to have done it and have two horses under me to help me out.”

They did, and she’ll have both in Casper to test her luck and skills in a rugged testimony to the championship happenings. Each contestant will compete in three go-rounds, with the top times advancing to the championship round. From there, the contestants with the fastest four-run aggregate time in each event will earn the coveted title.

“I made it my sophomore year in college, but I didn’t make it last year,” said Wakefield, a senior from O’Neill, Nebraska. “Not making it last year has shown me how bad it could be.

“The fact that I won the region in calf roping was everything to me, because that’s the one event I’ve tried to focus on.”

He’s gotten better at it over the years, admittedly struggling with the discipline in high school. Still, his all-around talents have made him an important member of the college team, because he can earn points in tie-down roping, team roping and steer wrestling – he finished third in the region’s all-around standings.

“I think my experience in the past is going to help, because I obviously know the start and the score better,” he said. “I know how fast I need to be to set up the calves. I made the short go my sophomore year, which helps me see the setup and how the calves are going to be.”

Ralph hasn’t earned a spot at the championship before, but Nall, a junior from Colcord, Oklahoma, placed fifth a year ago. Next week, he will rope with Ethan Griffin of Northeast Oklahoma A&M. Ralph, a junior from Wann, Oklahoma, earned the steer wrestling title in Garden City, Kansas, toward the end of the season to clinch his spot in Casper.

Anderson, though, dominated the steer wrestling standings throughout the season. He will carry experience from his freshman season’s CNFR bid with him as he prepares to tackle the toughest test in college rodeo.

“It’s pretty exciting going back,” said Anderson, a junior from Carrington, North Dakota. “It’s nice knowing how the college finals works now. I can go in with a little more of a confident mindset. We’re going in with a lot of confidence, and hopefully we can get four laid down and do some good.”

The key is stopping the clock in every round. A no-time is virtually disastrous for the chances of making the final go-round, and it would definitely take a contestant out of title contention.

“When you’re running four head of steers, a lot can happen,” he said. “If we can get four good runs together, we should end up in a good spot. I don’t want to put too much emphasis on winning first every time; I just want to make solid runs and be sharp. I want to try to be smooth and let things happen, not take short cuts and try to push things to happen.”

That’s easier said than done. The arena floor at the events center is pressure-packed. Nerves are stretched to the edges of the body and the contestants take their shot at each round.

“This is my last year of college rodeo, so I’m a little tight,” Wakefield said of the nerves that were already coursing through his body about a week before he was to run his first calf. “I’ve been taking baby steps with my calf roping. It can be a long and bumpy road, but I think it’s starting to straighten out.”

It’s a phenomenon that happens in sports, and it come together for the Rangers. Now with four cowboys in the mix, Northwestern can have a shot at the team title if things go well.

“For being such a small team, I think we’re going to be effective out there,” Wakefield said, noting that the top two teams in each reach advance six cowboys. “It’s no accident Bridger won the region in steer wrestling; he’s the best bulldogger in the region.

“Tanner is an amazing guy to watch, and he’s probably the most consistent heeler in the region. Bradley put in a lot of hard work, and he could be a threat at the college finals.”

While a women’s team title is equivalent to the long shot in horse racing, the Rangers have something special in Munsell. In addition to having great success in college rodeo, she also finished second at The American, the largest one-day payout in rodeo that takes place in Arlington, Texas.

“Since the CNFR last year, I’ve had the best year of rodeo I could ask for,” said Munsell, who will obtain an extra year of eligibility next year by attending graduate school at Northwestern, returning to the women’s team. “I’ve been behind a lot more barriers – (meaning she has competed more this year than in the past) – and I’ve been under a lot more pressure.

“Our matches and jackpots we do at school work wonders, but there’s something different when you’re behind the barrier at the college finals, at The American or at some other prestigious event. It gives you confidence.”

Casper, Wyoming, in June is a great place to have it.