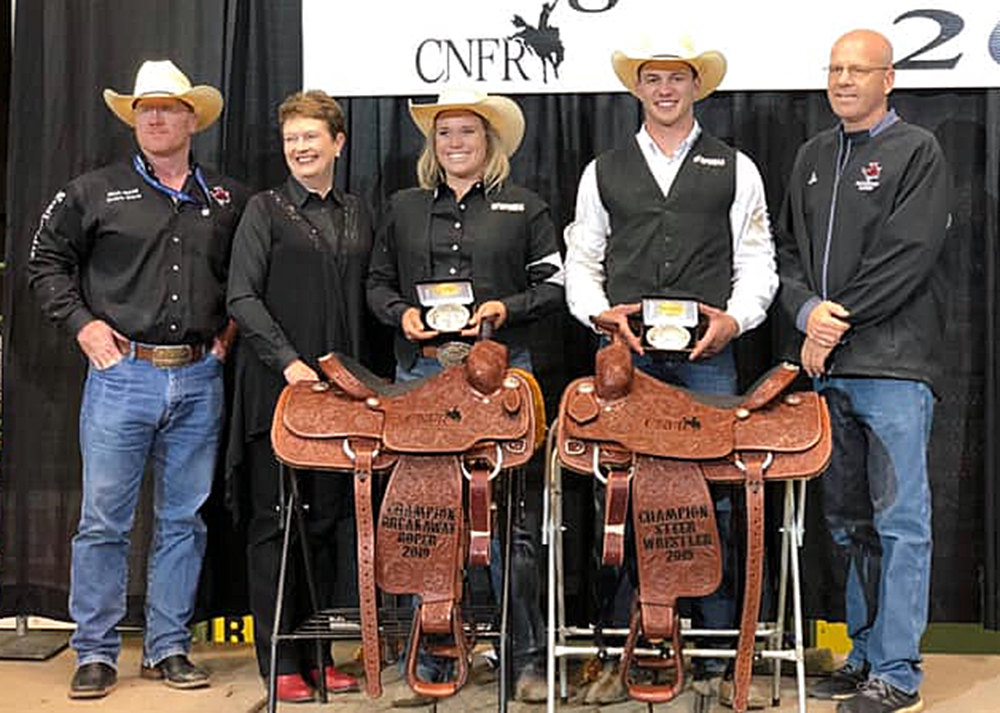 ALVA, Okla. – Reaching the pinnacle of one’s sport is the dream of every athlete.

Taylor Munsell and Bridger Anderson have done that for the Northwestern Oklahoma State University rodeo team. They added just the second and third national rodeo championships in the school’s history, and they did it in dominating fashion at the College National Finals Rodeo in Casper, Wyoming.

“Winning the national title is pretty cool,” said Anderson, a sophomore steer wrestler from Carrington, North Dakota, who knocked four steers to the ground in a cumulative time of 19.1 seconds. “We knew that my teammates and I had a good chance of winning a national title. It was pretty exciting that Taylor and I were able to walk away with it.

Munsell, a senior breakaway roper from Arnett, Oklahoma, finished with a four-run cumulative time of 10.5 seconds. Like Anderson, she shared the first-round win with a blazing 2.1-second run. She followed that with a 2.3-second run, which was good enough for a tie for second place in the second round.

“I have to credit much of my success to that horse,” Munsell said of Monster, a 13-year-old bay gelding. “There are not a lot of horses that will let you be 2.1 and 2.3, then let you track two down, swing a rope over them and help you rope smart. He’s 100 percent every time.

“This feeling is so amazing. My support system is so big. Everyone around me has been so great to help me get here.”

Anderson earned his share of the first-round title with a 3.9-second run, then was 3.8 in the second round to place third. After his third-round steer moved left into him, he settled for a consistent 4.7 to earn the top spot heading into the championship round. Both Rangers had solid leads as they awaited their fourth run of a hectic week.

“I was just trying to hit the barrier and make smooth runs, and I think that was the biggest key to success,” said Anderson, who was joined as Central Plains Region titlists by Munsell and tie-down roper Riley Wakefield of O’Neill, Nebraska.

Everything went smooth for Munsell, and the first three were solid for Anderson. The fourth, however, made for some tense moments inside the Casper Events Center.

“My fourth run was terrible, but we had enough time built up that it worked out,” he said. “My high school wrestling instincts took over. That was a huge relief.”

A solid run consists of a bulldogger transitioning from his horse to the steer and securing both horns. Anderson’s fourth-round steer slipped its left horn under his arm, but the North Dakota cowboy was able to maintain his hold and throw the animal down in time to claim the national title by two-tenths of a second.

“I didn’t have any jitters for the short round and was feeling pretty confident,” he said. “As soon as I missed that left horn, I went into pure panic mode. My body shook for five hours after that; it was terrorizing. I was doing anything I could to get him laid over.”

There was never any panic when it came to Munsell’s approach to the national championship. Like any national championship playoff in college sports, only the elite few in every event advance to the college finals. Once there, it comes down to which contestant has the best run during the week of competition. It can be a rugged test, but those that have been battle-tested can prevail.

“I was really trying to stay positive and not let any doubt set in,” said Munsell, who won more than $20,000 in February by finishing as the runner-up at The American. “I knew I’d roped good enough. I perfected it on the dummy every day. I went to all the evening church services, and they helped keep your mind in the right place.”

Even though she just finished her undergraduate degree, Munsell will continue her education at Northwestern, working to obtain a master’s degree in health and sports science education. She will have one more year of eligibility and will serve as a graduate assistant for coach Stockton Graves.

Now she and Anderson can work toward defending their titles.

“It would be something to win it two years in a row,” said Munsell, whose 270 points was enough for the Rangers women to finish sixth in the nation. “There are a lot of runs between now and then, but that would be the big goal.”

Both will compete professionally over the summer and into the fall, and then it will be time to return to the 10 events on the Central Plains Region calendar.

“That first day you win that college championship is cool, and it’s a big deal,” Anderson said. “The very next day, it’s back to square one. You forget about the championship you’ve already won, and you focus on the next one. We’ll try to win another regional championship, get back to the college finals and see where that takes us.”