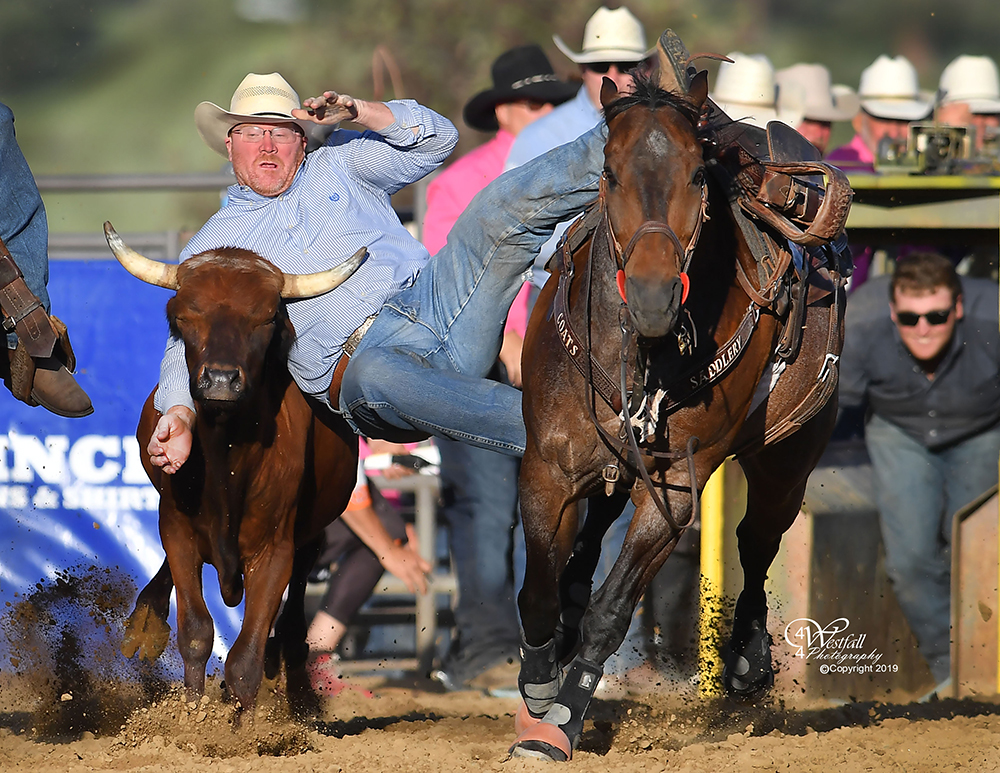 ESTES PARK, Colo. – Stockton Graves’ focus on rodeo is quite a bit different than it was a decade ago.

He’s a seven-time National Finals Rodeo qualifier in steer wrestling who last played in Las Vegas in December 2011. Since then, he’s focused on his job as the rodeo coach at his alma mater, Northwestern Oklahoma State University, and raising a family with his wife, Crissi.

On Tuesday night during the second performance of the Rooftop Rodeo, Graves knocked down his steer inn 4.2 seconds to take the first-round lead and is scheduled to make his final run Saturday to see where he finishes overall.

“I had a good steer and thought I had a great start,” said Graves, 40, who is now the father of a little girl and little boy. “I didn’t make that good of a run, but I’m winning it right now. I might not win anything when it’s all done.”

That’s the way rodeo works. The first round will continue through the rest of the week, then the second round will take place Saturday. Money will be paid out in both rounds, but the biggest pay is designated for the top two-run cumulative times.

That means there are three chances to win money in Estes Park, and that’s just fine with every cowboy and cowgirl in the field. That includes Graves, who is traveling the rodeo trail with a couple of understudies – Bridger Anderson and J.D. Struxness – and another veteran in Billy Boldon.

“I told these boys that I’d come help them,” Graves said. “I have a good horse. If I made the NFR, that’d be great. I’d like to go to Houston and San Antonio next year, so I’d like to stay in the top 40 and stay in the WCRA deal, because I really like that.

“I’ve been gone from home for a solid two weeks now, and it’s been pretty tough for me, but my wife, my daughter and my son are all supportive of me being out here.”

The World Champion’s Rodeo Alliance was developed recently and offers big-money events and other opportunities for contestants to compete at WCRA events. This year, Graves has earned more than $100,000 at those events alone.

He knows he can still compete at an elite level, so he’s making the most of it. Part of that is thanks to his students, Anderson and Struxness, both of whom have won the bulldogging championship in the National Intercollegiate Rodeo Association – Struxness won the title in 2016, while Anderson won his a month ago at the College National Finals Rodeo.

“It means a lot to have those two,” Graves said. “I like to watch them succeed. If I can be a part of it, that’s great, but it’s great if I’m not. Bridger is going to be a junior, so he’s young. J.D. still lives down there and rodeos out of there, so it’s nice to be around.

“It keeps me young at heart.”

If that doesn’t do it, the fall semester will. He’ll have some returning students to the rodeo team, but he will also have some wide-eyed freshmen wanting to learn from one of the best teachers in the game.

“I’ll go back to work in the fall, and I’ll fly in and out,” he said. “Be we’ve got a good horse, and he doesn’t need to be at home doing nothing.”

That mount is Freeway, a 10-year-old blue roan gelding he purchased two years ago.

“He’s got a lot of talent and a lot of speed,” Graves said of the talented horse. “He’s pretty easy. From the first steer we ran on him, he’s been ready to go. I just didn’t want to put pressure on him, so I held him off last year. We decided this year would be a good time for him to go.”

It’s working well for Graves and the rest of his traveling posse.