Bendele’s fingers do the walking 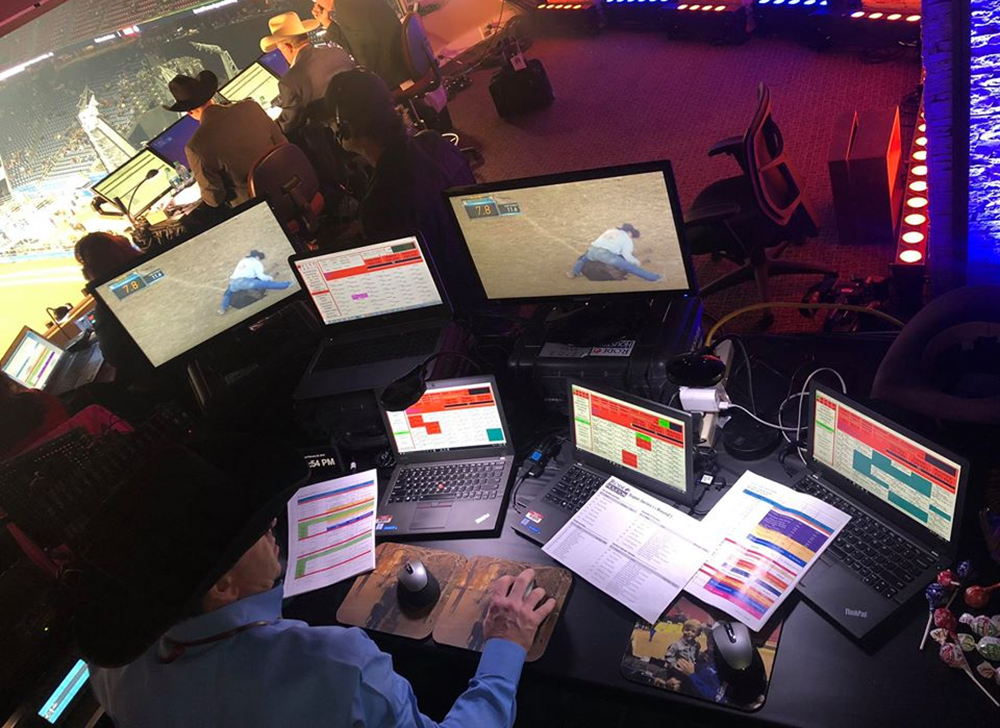 Ah, the life of the preeminent sound director in ProRodeo. If it happens in the arena, the speakers rumble with a complementary sound. It’s a split-second, a click and a style that has led the Texan to many of the biggest rodeos in North America.

“It’s been a great ride,” said Bendele, who has lent his talents the last two decades to the Wrangler National Finals Rodeo. “Rodeos have picked up this format. They’ve left the traditional brass bands, and they realize that this is another aspect of the performances.”

And that’s one of the reasons he will be a major player in the five performances of Dodge City Roundup Rodeo, set for 7:45 p.m. Wednesday, July 31-Sunday, Aug. 5, at Roundup Arena – it includes the Xtreme Bulls on Tuesday, July 30.

“Benje has been here for a long time; he’s the best there is,” said Dr. R.C. Trotter, chairman of the volunteer rodeo committee that produces the annual event. “Benje’s work just adds so much to our rodeo. He always seems to have the right sound to go with whatever is happening in the arena. His timing is incredible.”

The effects and music can’t be choreographed, because the action doesn’t allow it. But with split-second timing, Bendele finds the right music or right sound effect to bring together that excellent ride, fast time or explosive dismount.

“I think the thing I like about my career is being part of the way the rodeo is watched and taken in by rodeo fans and how that’s changed in the last 10 years,” he said. “It’s changed drastically in the last five years. It’s just the way sporting events in general are being seen, and we, in the rodeo business, have to keep up with that. I’ve been part of that, part of the goal in our sport.

“It’s how our sport evolves.”

That’s something Bendele understands well. He started his rodeo career as a contestant, then followed his passion for the sport to the announcer’s stand and on to the sound booth. Beginning at age 9, he competed in youth, high school and college rodeo as a team roper and tie-down roper. He even tried his hand at bull-riding, which lasted 15 seconds – five bulls at an average of three seconds each.

“It was then and there that I decided that bull riding was not for me,” he said.

No matter. Bendele has used that experience and an insider’s understanding of the extreme sport to stand out among his peers. Not only does he work the annual championship, but he’s also been hired to produce sound for some of the biggest events in the sport.

He’s also worked his way up the charts, so to speak, with ingenuity and hard work. In fact, he got the NFR job while working at a rodeo in Glens Falls, N.Y.

“I knew Shawn Davis, the general manager of the NFR, was looking for a music guy for the Dallas event, so I called him up from a little hotel room,” Bendele said. “I’d set up all my equipment in this room, kind of a mini-studio, and when I called him, he asked, ‘What can you do for me?’

“So, I put on a little show. By the end of the conversation, I was hired. I did the Dallas event, and at that point, they hired me for the NFR.”

He’s had plenty of experiences in his time in the game. He recalls the days of not only hauling equipment into announcer’s stands at rodeos all across this land, but hauling cassette tapes and CDs, too. Now all the effects and music are loaded on computers, and making updates is a regular part of his job.

“We have to keep up with technology,” he said. “Digital is constantly changing. Now with the computer, it’s at the touch of a button, and there’s so much more of a variety to have.”

And whether it’s a snippet from a hip hop song or brass trumpets or the moans of a crowd, there is a defined marriage between the action in the arena and the sounds that accompany it. It’s Benje Bendele at his best.