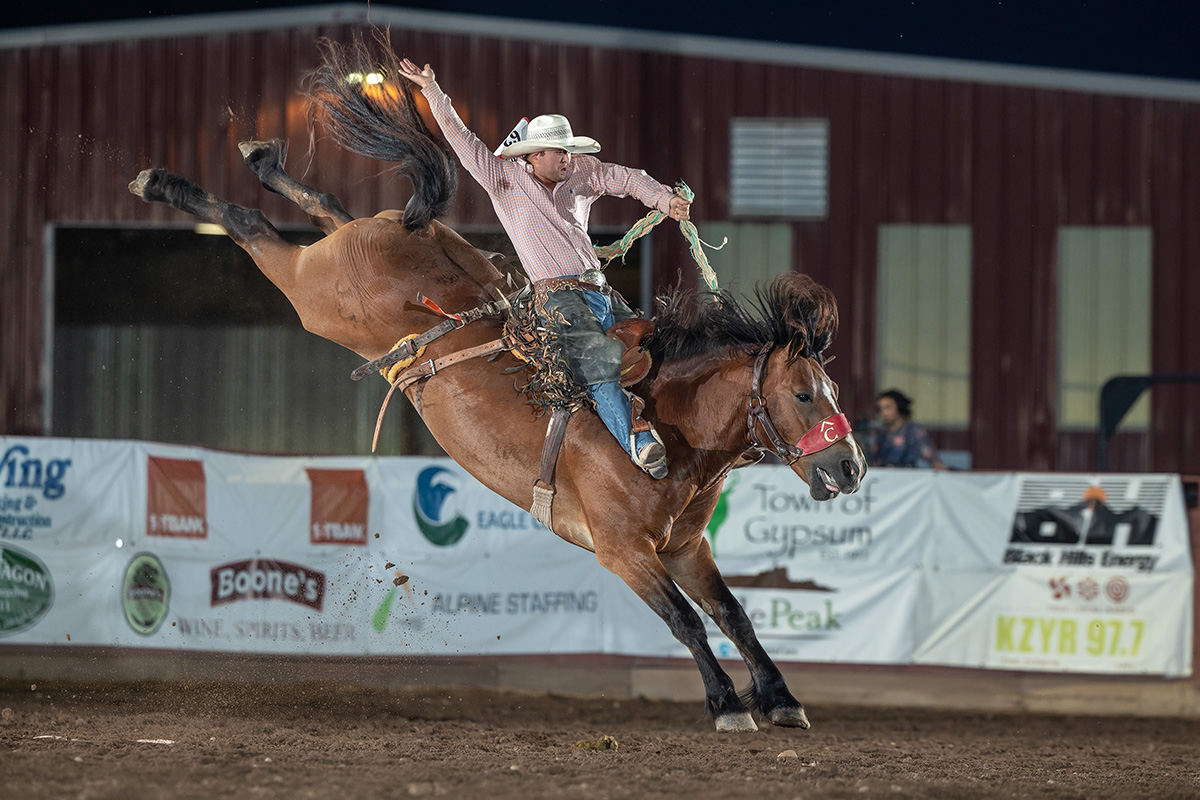 EAGLE, Colo. – For most rodeo cowboys, the Eagle County Fair and Rodeo is a terrific spot to enjoy the Rocky Mountains, a beautiful setting and a great rodeo.

He’s excited to return to this year’s rodeo, set for 7 p.m. Wednesday, July 24-Saturday, July 27, at Johnette Phillips Arena on the Eagle County Fairgrounds. He knows why so many others are putting their names in the hat to compete in Eagle this summer.

“The committee did up their money this year, which is nice,” Schlegel said. “it’s one of those rodeos that they made a big step a few years ago when they brought in (stock contractor) Pete Carr. That and other things have upped their entries.”

That’s true. More than 300 contestants have thrown their names in the hat to compete in Eagle this year. That’s a significant number considering the dozens of other Professional Rodeo Cowboys Association events that will take place that week, whether its in Cheyenne, Wyoming; Deadwood, South Dakota; Burwell, Nebraska; or one of the other stops across the country.

“That’s a tough weekend to compete for rodeos, so to be able to still draw numbers like that is great for the Eagle rodeo,” Schlegel said. “I think it’s a great rodeo and a great atmosphere. They still pack the fans, and they’ve got great hospitality.

“It’s a great place. Pete Carr makes sure he brings up his good horses, and I commend them for trying to up their money and become more well known. The money is what’s going to bring the cowboys to town.”

In fact, of the 300-plus contestants who are scheduled to compete, dozens have competed at the National Finals Rodeo and several others have earned the most coveted prizes in the game: world champions’ gold buckles.

“It’s a good little spot to go, up there in the mountains and Pete Carr having the stock there,” said Joe Lufkin, a saddle bronc rider from Sallisaw, Oklahoma. “It’s just a good time of year to go. Its nice to go up there and relax a little in Eagle and get on some good horses.”

Over the years, the Eagle County Fair and Rodeo has been recognized as one of the best events in the PRCA. It has been nominated as Medium Rodeo of the Year, which features just five finalists each year.

There’s no reason it shouldn’t be recognized as such each year.

“The contestants like it because after you’ve rodeoed in Pecos, Texas, and Pretty Prairie, Kansas, where it’s 104 degrees and hot and miserable, it’s nice to go to a good rodeo with good stock and be in a nice, cool temperature,” said Justin Rumford, the six-time PRCA Clown of the Year who will work Eagle for the second time. “It’s just kind of a wind-down of the regular rodeo grind.”