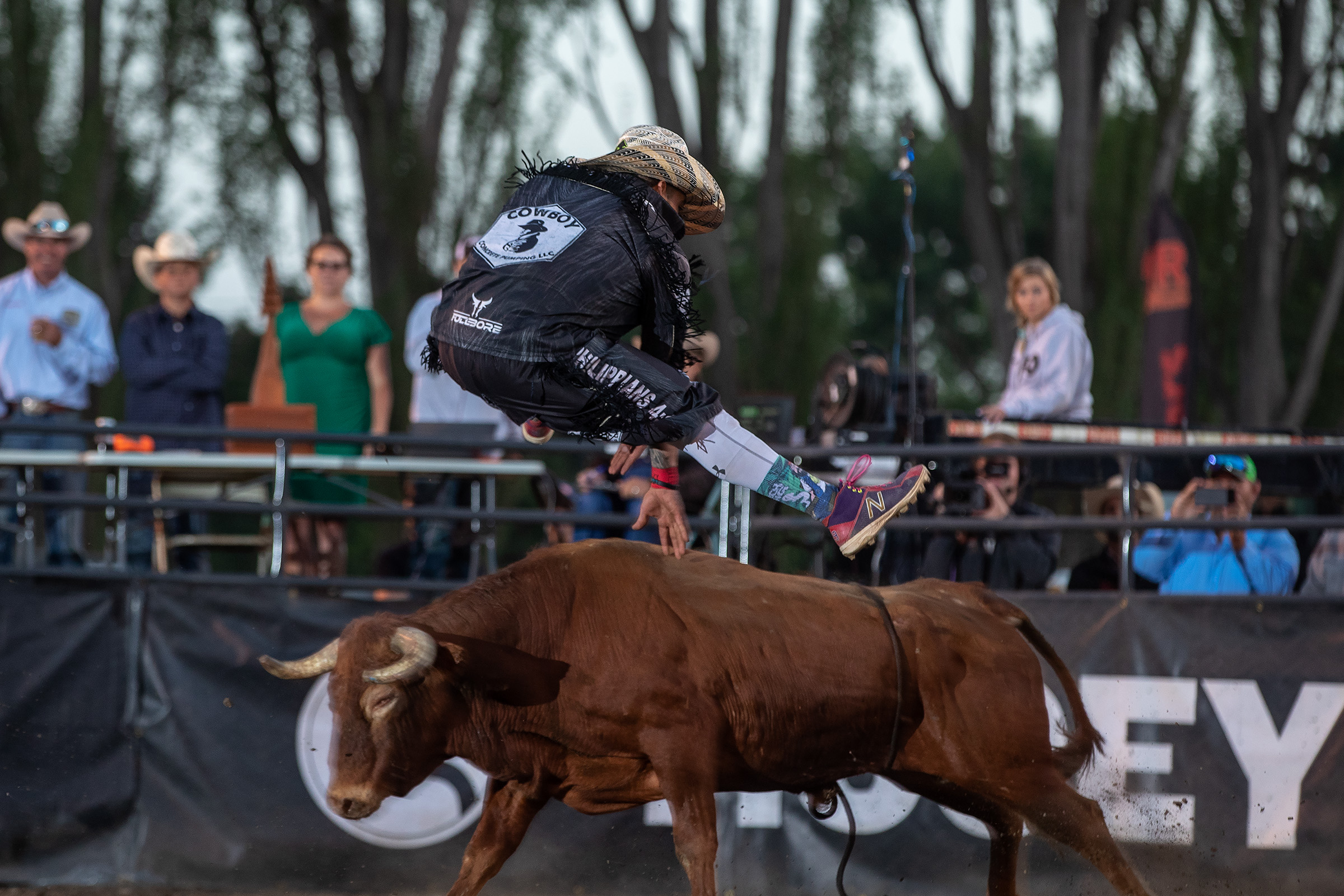 Gonzalez earns another BFO victory, this time in northern California

FORTUNA, Calif. – While his ancestors enjoyed bullfighting with a cape and an olè, Andrès “Sasquatch” Gonzalez loves what he’s able to do during the American version of freestyle bullfighting through Bullfighters Only.

The proof has come often this season, with the latest version happening last Friday night at the BFO Sequoia Cup in Fortuna. In his first time competing among the Redwood trees and the rowdy fans that Fortuna is known for, he walked away as the event champion.

“This was a big win for me, because overall, I think it’s great having a California guy winning an event like this,” said Gonzalez, who pocketed $6,000 and carried a specially made wooden trophy back home to Woodland, California. “I feel like it’s one of the bigger events, and it was an awesome experience.”

He was one of five men to advance to the Hooey Championship Round, where he posted 87.5 points to share the top score with newcomer Chance Pruitt. Gonzalez earned the title through the tie-breaker by having a higher bullfighter score – the total points are based on a 100-point scale, with half the score coming from the animal and half from how well the man controlled the fight.

The Californian earned the title by a mere half point.

“You don’t see too many Hispanics on the rodeo side of things, especially in freestyle bullfighting,” he said. “This is the kind of show that I like to do. When anybody dedicates themselves, they can do whatever they want.

“I feel like I was born to be a freestyle bullfighter; it’s in my blood. I thank God it was a gift He gave me.”

It was also an experience for the whopping crowd in the northern California community of 12,000 people, but it’s something they’ve grown to love thanks in large part to the organizers. The BFO has been a big part of the celebration in Fortuna for three years.

“For us to bring the BFO gang up here is a big deal for this part of the country,” said Shannon McWhorter, president of the Fortuna Rodeo Association. “They’ve stepped up their game every year, from the first year where we just set up some panels and threw some things together until now, where it’s a full-blown BFO event like you’d see in Las Vegas.

“We pack the people in here, and fans leave this thing saying they can’t wait until next year. These guys are just like us, and a lot of these guys are from rural backgrounds. They come in here and just make us look good. We’re just a group of 20 guys that put on a weeklong festival, and the biggest part of the festival is the BFO.”

That’s saying something in just three short years, but it’s become a trend with the rapidly growing BFO, which got its start in 2015 and had its first full season a year later. It’s now the most extreme sport in the country, with all the prestige and production necessary to help draw fans to the dangerous game of chance.

Evidence of that came in the final round when the two-time bull of the year, Manuel Costa’s Sid Vicious, was matched with the Calgary, Alberta’s Aaron Mercer, the No. 2 man in the BFO Pendleton Whisky World Standings. As the bullfighter started his bout with his patented “Mercy Roll,” Sid Vicious added a bump and caused him to over rotate.

Mercer righted himself, only to be thrown high into the air just six seconds into the bout. In all, Mercer was knocked around at least eight times, with Sid Vicious ripping off his jersey and protective vest in the process. But the Canadian finished the bout.

“I went into that fight with a different mindset,” he said. “I wasn’t as worked up as I normally would have been. I heard I had Sid Vicious in the short round. You hear that name, and you’re going to get a little more nervous. I’m just glad I was able to finish the fight.

“The crowd was massive, and the stands were full and people were standing around. They crave bullfighting there. People love it in Fortuna, and we love putting on a show for them. I think that’s what makes Fortuna one of our better events.”

Pruitt was competing at just his second BFO event, just a few weeks removed from the Southern Classic in Gainesville, Georgia. He quickly realized there was a different energy in the stands among the giant Redwoods.

“It was a really cool setting,” said Pruitt, 18, of Jasper, Arkansas. “For us to drive there was awesome, to see the Redwoods and then to get there and see the arena. The backside was pretty far up, and it was full of people. The crowd was really into it.”

His second-place finish also proved why the BFO invited him to compete amongst the top athletes in the freestyle bullfighting game. Not only are the top bullfighters in the BFO, but so are the rising stars and there are still plenty of opportunities ahead to earn a bid for the Las Vegas Championships, set for Dec. 5-14 at the Tropicana Las Vegas.

“With this win, I think I moved to No. 5 in the world,” Gonzalez said. “I’m going for the No. 1 spot, and hopefully I can work my way to be the world champ. For me being the only Hispanic on tour, it means a lot to me to do well.

“Being able to be part of the BFO is the biggest thing for my career. These were my idols, and now being able to compete against these guys is a dream come true. This is a goal of my life. Last  year, I was in two events, and I won them both, and now I’m being part of the whole tour is incredible for me.”