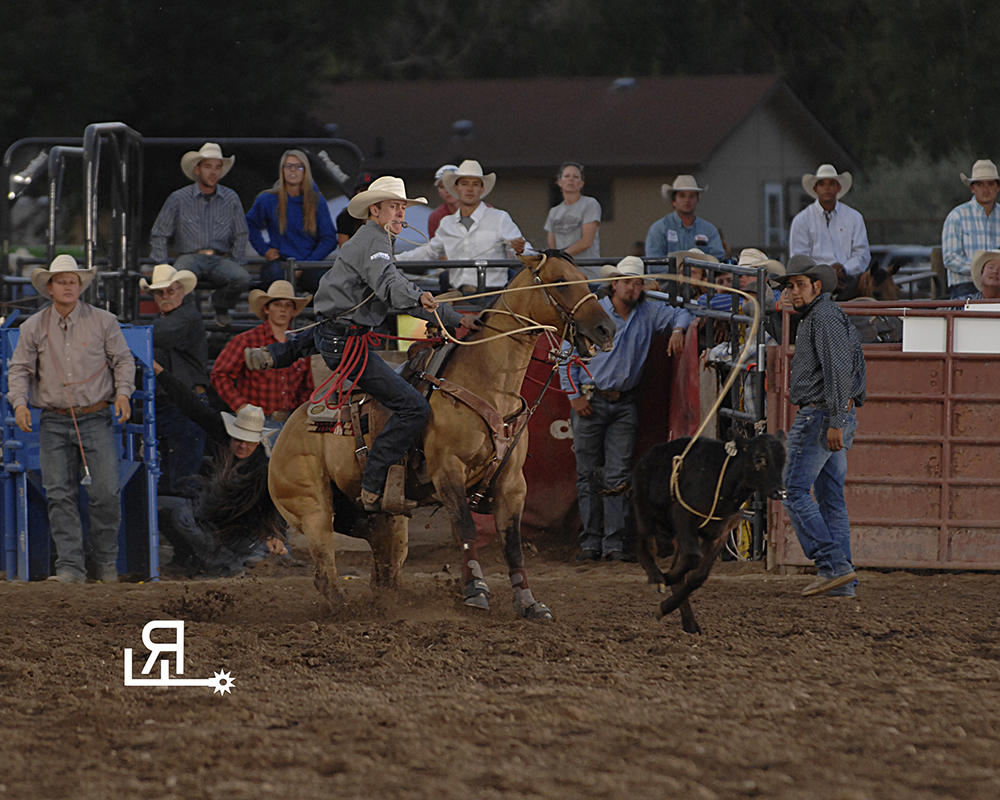 He’s attending the two-year school on a rodeo scholarship, and he did his part in his inaugural campaign by winning the Southwest Region of the National Intercollegiate Rodeo Association. That earned Brennise a trip to the College National Finals Rodeo.

A little more than a month ago, he roped and tied four calves in 55.0 seconds and finished seventh in the nation in tie-down roping. That’s not bad for a man in his first year of college rodeo.

Fast forward to Wednesday night at the Eagle County Fair and Rodeo, where he stopped the clock in 10.5 seconds to take the early tie-down roping lead after the opening performance.

“It’s really important for me to do well here,” said Brennise of Craig, Colorado, about a two-hour drive through the mountains northeast of Eagle. “It keeps me going. I’ve got for more (rodeos) to go to this weekend, then I’m back here Saturday, so it’s important to keep going and to win some money here.”

Just 19 years old, he’s in his first season in ProRodeo, competing on his permit – newcomers to the game are given the opportunity to earn their way to become full members of the PRCA by earning enough money on their permit. Heading into this week’s rodeos, he’s earned more than $1,500 in the Mountain States Circuit, made up of rodeos and contestants from primarily Colorado and Wyoming.

His family owns a ranch near Craig, and his father owns an outfitting business. He knows he has an opportunity to not only do well in the opening round, but he will run his second calf Saturday night and sits in a good place to not only collect a second-round check but also one for having a top aggregate score on two runs.

But he’s not the only young one in the bunch. He leans quite a bit on his partner, a 6-year-old horse he’s owned almost a year.

“I rode him at all the region rodeos,” he said, referring to his college season. “He’s just been outstanding him. I brought him tonight, and nothing bothers him. He takes the crowd pretty good. He was amazing when I got him. He scores great, and he stops and does the right things every time.”

His first experience in Eagle made an impact. He looked around at the packed ground, then stood in awe.

While Brennise is new to the Eagle rodeo, saddle bronc rider Bradley Harter has been to the beautiful mountain community many times in his 17-year career. He’s also a 10-time qualifier to the National Finals Rodeo, the sport’s grand championship.

A year ago, he just missed the mark. The NFR features only the top 15 contestants in each event after the regular season; Harter finished 19th. On Wednesday night, he rode Pete Carr Pro Rodeo’s Another Grey for 79 points to take the bronc riding lead.

“I come here every year,” he said. “I’ve won it, and we’re always up here going to Cheyenne (Wyoming) and over from Spanish Fork (Utah). This is a great rodeo. I thank God every day that I get to do my job, and I get to come up here and see how pretty it is. It makes me thank God every day for a great job.”

Now 37, Harter knows he’s on the downhill side of his bronc riding career. The miles on the road going from one rodeo to another take their toll, as do the rough buckoffs and the time away from family, his wife, Kirby, and their sons, Houston and Branson.

“I’ve had a great career, and I go into every town, and I look out and think, ‘I’ll be back next year,’ ” said Harter of Loranger, Louisiana. “The older I get, the more I realize I have an expiration date, so I get to sit back and take more pleasure out of jut being there, being around my friends and getting on good bucking horses.

“My schedule, with two older kids, is going to change. I’m going to make the good rodeos count and focus on raising my kids. I put them first. Houston is 9, and Branson is 5. They’re playing baseball, hunting, and I need to be there more.”

But he’s going to enjoy his time on the road while he can and hopefully return to the NFR this coming December. He is 10th in the world standings with nearly $64,000.

“They’re in Louisiana, where it’s ridiculously hot, and I’m here in God’s country,” he said with a laugh. “I went home and rededicated myself, so I’m not sitting on the couch this year during the NFR. I’m going to go in there and have a good finals and leave there with my head held high.”

It’s an approach that’s worked pretty well over his career.