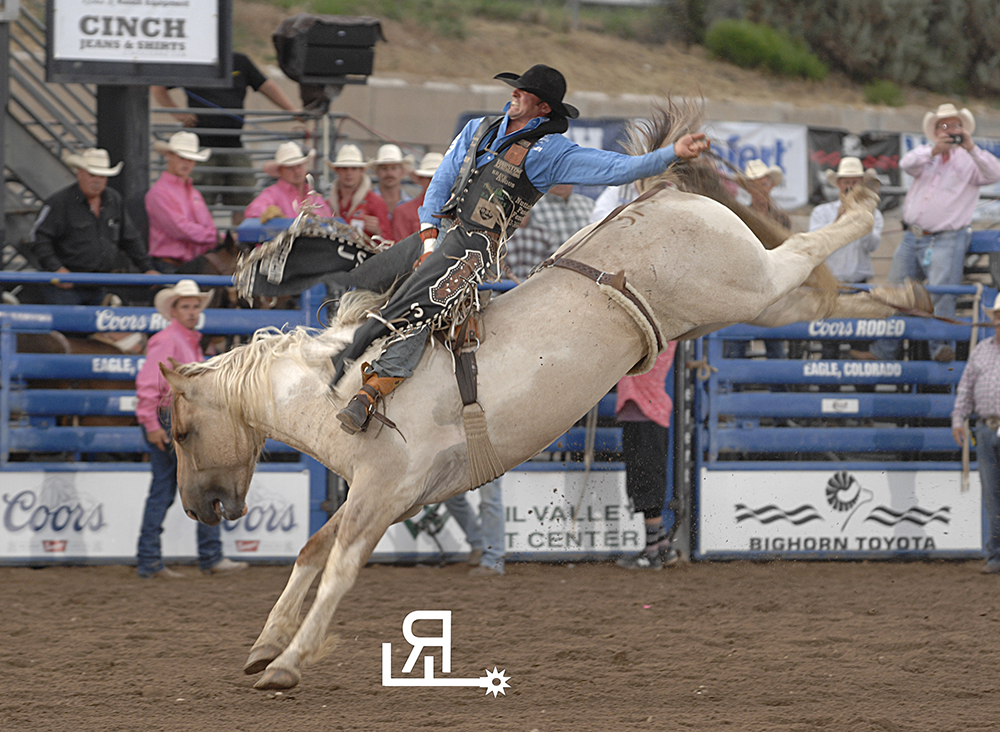 “I had him in San Angelo (Texas) in the Cinch Chute-Out,” said Dent, a nine-time National Finals Rodeo qualifier from Mullen, Nebraska. “He was wolfy both times I had him. He turned back with me (in Texas) and was all I wanted.”

“I try to come here regularly,” he said of the Eagle rodeo. “I try to work the rodeos I can enter with Cheyenne.

“This is a great rodeo. It’s cool, and by now you’re tired of sweating. It’s got a great crowd.”

It was actually a great day riding bucking horses for Dent. He was one of the top six in Friday’s round in Cheyenne, so he qualified to compete in Sunday’s short round; that, combined with winning Eagle, is nice. Alas, he was stepped on after his ride and is suffering from a sprained and swollen left ankle.

What relieved the pain a bit was that Aus posted an 85-point ride on Carr’s Painted River and sits in second place. The only missing ingredient is their third traveling partner, Ty Breuer, but all three cowboys are among the top 15 in the world standings and have a good chance to another bid to the NFR this December – only the top 15 on the money list in each event at the conclusion of the regular season earn the right to play for the biggest pay in the game in Las Vegas..

“I think every rig shows up saying, ‘We’re going to show up finishing one-two or one-two-three, but it’s fun when you can actually do it,’ ” said Aus, a three-time NFR qualifier from Granite Falls, Minnesota. “I’ve been looking forward to getting on that horse all week. We had a few other rodeos to go to, so I just tried to stay focused on that one.

“This is a beautiful place to be. I love coming to Eagle. Pete’s got a great pen of horses. Just to come up to a place like this in the mountains is just great. The crowd’s fired up; it’s packed tonight. That’s fun, especially this time of year when rodeos are close together and we’re starting to get tired, it’s good to see people in the stands; we’re glad to hear them.”

As far as the rig goes, Breuer leads the pack sitting seventh, while Dent is ninth and Aus is 11th. There are many rodeos between now and the end of the regular season, but there’s a lot of confidence inside that vehicle.

After Cheyenne’s short round, both men will get a few days off to spend with family, which is virtually a luxury this time of year. Most cowboys leave home toward the end of June and don’t return until September. Dent left as soon as he got his ankle checked and iced to make the seven-hour drive to his hometown in the sandhills of Nebraska.

“I ought to get home about 4 o’clock in the morning, catch a little sleep, then go to Burwell tomorrow night,” he said of the Nebraska rodeo that is less than two hours from his house. “Then we’ll head toward Cheyenne and get a hotel room, because I have to be back over at Cheyenne by 11 a.m. Sunday.

“Then I’ll have the biggest break since Reno (Nevada in late June), and that’s three or four days off.”

There’s no slowing down now, because the biggest prize in the game happens in Nevada in December.