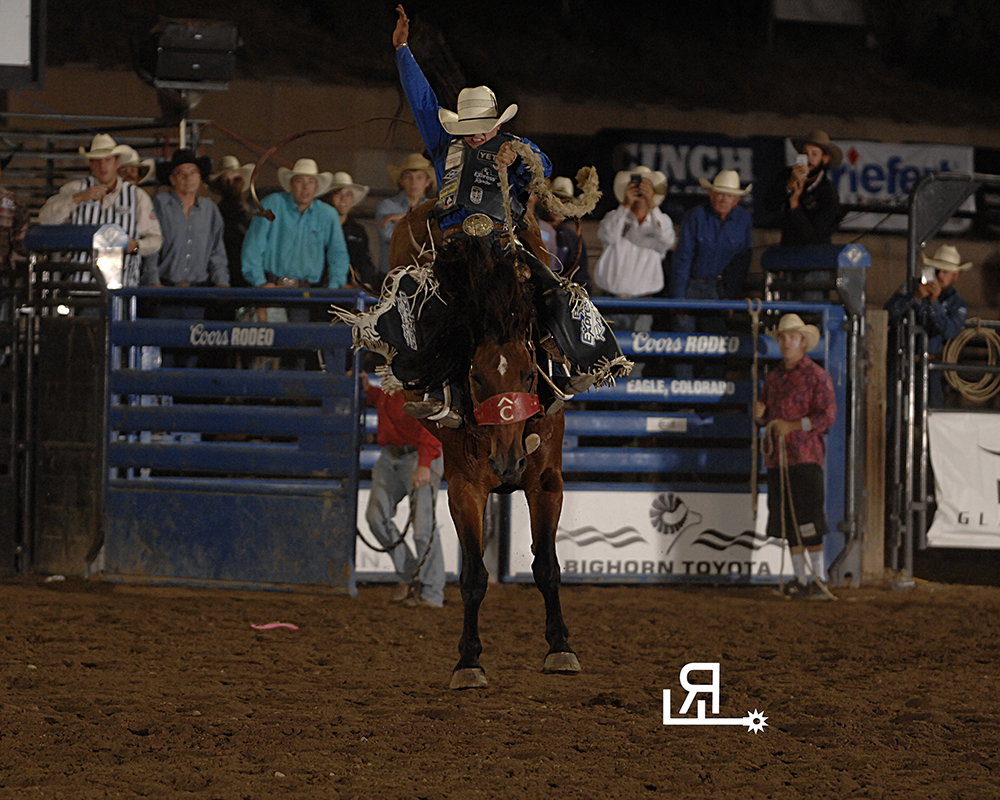 “I was more nervous than I was excited, because when you draw those kinds of horses, you’re expected to win on them,” said Wright, 23, of Milford, Utah. “You put a little pressure on yourself, because I thought I should win on him.”

He may be in the same pen in bronc riding this coming December.

“I couldn’t wait for it,” said Wright, who travels with his younger brothers, Ryder, the 2017 world champion; and Stetson, the No. 1 man in the all-around race who is just a PRCA rookie; and their uncle, Spencer, the 2014 world champ. “It felt like waiting on Christmas, like it was never going to come. I woke up this morning, and I had butterflies as soon as my eyes opened.”

Ryder Wright finished second in Eagle with an 85-point ride on Carr’s Daisy Duke, and Spencer Wright placed fifth with an 80.5-point ride on Northcott-Macza’s Moving Shadows. Ryder Wright will add to his saddle bronc world standings lead, which is already more than $180,000 this season.

Rusty Wright was ninth in the standings heading into this week, but the $3,079 he earned in Eagle will help.

“I’m really happy with my year,” he said. “I’m not up there in the standings where I want to be, but I’m really pleased with how I’m riding. I’ve been nickel-and-diming them, as my dad says, but winning is winning. Hopefully this will be the hot streak I’ve been waiting on all year to get the ball rolling.”

A year ago, Ryder and Spencer won the Eagle rodeo, so it’s been an important stop for the family, which boasts of five world champions in the family. Ryder is the only one of his generation, while his father, Cody, has two and uncles Spencer and Jesse each have one.

“It seems we come to Eagle every year,” Rusty Wright said. “I love coming here.  Pete’s got awesome horses. It doesn’t matter what day you’re coming, you know you’re going to get a good one; it’s just up to how well your ride to see if you’re going to get some money.

“The fans are loud. I got off today, and the fans were cheering so loud, I couldn’t help but throw my hat.”

Of course, he joins of chorus of other cowboys singing the praises of the talented gelding. In addition to having been named a two-time world champion in 2014-15, Dirty Jacket also finished second in the 2013 voting and third in the 2012 voting.

“He’s like a ticking time bomb,” Wright said. “As soon as the gate opens, he explodes out of there. He’s a big, strong, solid horse, and you could feel his whole body just blow up out of there. He was showy and electric. Horses like that get you excited. Every single jump, you feed off the last jump; you just try to ride them better.

“He’s now one of my favorite horses. I hope I draw him again, because there were a couple things I could do better, where I could have been two or three more points if I’d done everything perfect. That’s what we’re all after is that perfect ride, and the day you make that perfect ride, you should be done, because you’re never going to do it again.”

Saturday’s ride also marked the second-highest score Wright has ever posted; he was 92 points a few weeks ago at the Calgary (Alberta) Stampede. That rodeo, however, doesn’t count toward the ProRodeo world standings.